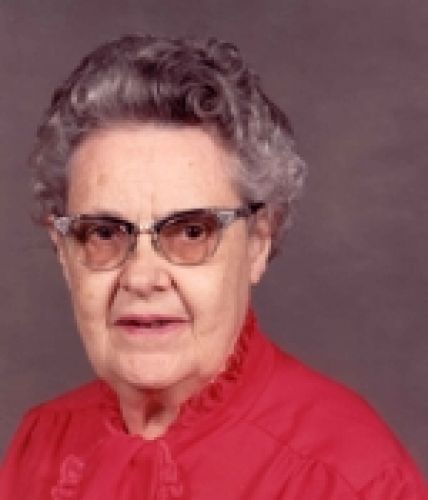 Florence Ada Morris, one of five children of John William Tyson and Ada (Strong) Tyson, was born on January 7, 1911 in rural Walnut, Iowa. She grew up in the area and attended country school near Oakland, Iowa. Florence worked on her parent's farm until her marriage to Virgil Raymond Morris on April 9, 1930 in Oakland. The marriage was instantly blessed with Virgil's three young children, Sarah Maxine, Jake David, and Virgil Berl. Virgil's first wife, Thelma Hetrick, had died at age 27 in 1926. Virgil and Florence's marriage continued to be blessed with three children, Raymond William, Marjorie Florence, and Doris Kay. Florence and Virgil farmed in the Oakland and Wales areas and in 1946, purchased a farm in Mills County east of Henderson, Iowa.
Florence suffered optic nerve damage as a young girl and eventually lost her sight completely. Despite her poor vision, she was able to perform all of the tasks of a farm wife and mother; to include winning awards for her beautiful roses, gladiolas, and vegetables. The family were active members of the Henderson Christian Church where Florence was a member of Ladies Aid.
In 1959, Virgil suffered a heart attack and had to quit farming. The following year in February, he and Florence moved into Henderson. They had been married 54 years when Virgil passed away on August 5, 1984 at the Good Samaritan Center in Red Oak, Iowa at the age of 87 years. Following his death, Florence continued to live in their home in Henderson until February 2005. She died at the Good Samaritan Center on April 7, 2006 at the age of 95 years and three months.
Florence was preceded in death by her husband Virgil; son Jake Morris; daughter Sarah Rodocker and husband George Rodocker; sisters Lily Bird and husband Wayne Bird and Elsie Beedle and husband Bill Beedle; brother John Tyson, Jr.; and brother-in-law Robert Smith.
Florence is survived by her children; Raymond "Bill" Morris and wife Joyce of Colton, CA, Marjorie Cleveringa and husband John of Sioux Center, IA, Doris Harman and husband Paul of Henderson, IA, and Virgil "Berl" Morris and wife Karen of Emerson, IA; daughter-in-law Roberta Morris of Emerson; sister Roma Smith of Oakland, IA; 26 grandchildren and several great grandchildren; nieces and nephews; other relatives and many friends.

"I didn't know Mrs. Morris but have known Berl and his family for years since I grew up in the Emerson area. Since reading her obituary I realize that Mrs. Morris was probably born near Walnut, IA where I now live. I have done some research on the farm where we live in the past year and was so surprised after reading her obituary. You see there was a Tyson family that lived here somewhere around 1910 that no one in the Walnut area really knows anything about. It was probably her family. I would appreciate knowing more about her family if and when you could get in contact with me. I am sorry for your loss. She lived a good long life. "