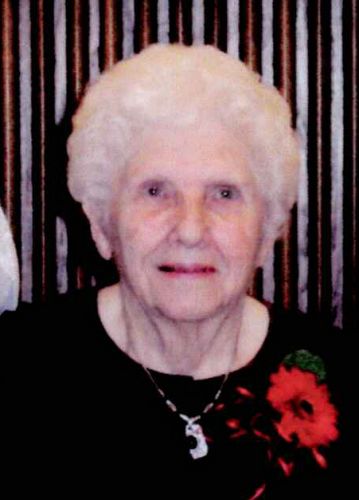 Luella Ann Richter was born May 11, 1927 in Geddes, SD, daughter of Greg and Othilia (Kuhle) Augustine. She grew up in Geddes, SD moving to Whittemore where she graduated from Presentation Academy in 1944 and graduating from Mercy School of Nursing in Des Moines, in 1948. She then worked as a nurse in California returning to the area in 1950 at which time she worked for Dr. Bourne.

Luella was united in marriage to Edward Richter on January 17, 1953 at St. John's Catholic Church in Bancroft. They lived northwest of Bancroft until 1966 when they moved into town. She worked at St. Ann's Hospital in Algona from 1964 until 1975 and then became Director of Nursing at Heritage Nursing Home until 1977. In 1978 Luella worked at Kossuth Regional Hospital in Algona until retiring in 1991. Luella enjoyed bowling, golfing, playing cards, crocheting and quilting. She was a member of St. John's Catholic Church, a past member of the CD of A, and a member of St. John's Altar Guild.

She is survived by six children, Duane Richter, Jay (Mary) Richter, Bob (Deb) Richter all of Bancroft, Betty Hawkes of Marshalltown, Mary (Larry) Hellman of Burt, and Ruth (Bill) Foth of Glendale, AZ; a daughter-in-law, Therese Richter of Bancroft; 19 grandchildren; and 4 great-grandchildren. She is also survived by two sisters, Wilma Haupert and Lorraine Vaske, both of Algona; a sister-in-law, Dolores Augustine of Cresco; and many nieces and nephews.

She was preceded in death by her parents; her husband Ed on February 26, 2002; her son, Dave Richter on December 27, 2010; two sisters, Vera Delaney and Rosalyn Kingsley; and two brothers Greg Augustine and Linus in infancy.

"Our deepest synpathy upon the passing of your Mother. May you be blessed with lots of good memories to get you through this diffucult time as you mourn. Just remember that your Mom is in the best place, at God's side. God's Blessings to all of you. Henry & Debbie Mayland"

"To the Richter family...please accept my sympathy at the loss of your Mother, Luella. I am sorry that I will be unable to be present for her funeral Mass on Monday, October 31st. I will offer Mass for the repose of her soul on Monday and will also ask God's blessings on you -may your faith be strong. Know that she will be with all the Saints in heaven which we celebrate on November 1st. God's blessings to you. Love with prayers, cousin , Msgr. Roger J. Augustine"

"To the Richter family, My heart was saddened to hear of the death of Lu...she was a sweetheart and always had a smile and a hug for me whenever I saw her....I got to know her so well when delivering meals to her and always looked forward to seeing her and chatting and of course, we always exchanged that "hug"...she will be missed by all of you and those of us that enjoyed seeing her.. she is now rejoicing in heaven with her loved ones ..thoughts and prayers to the family..."