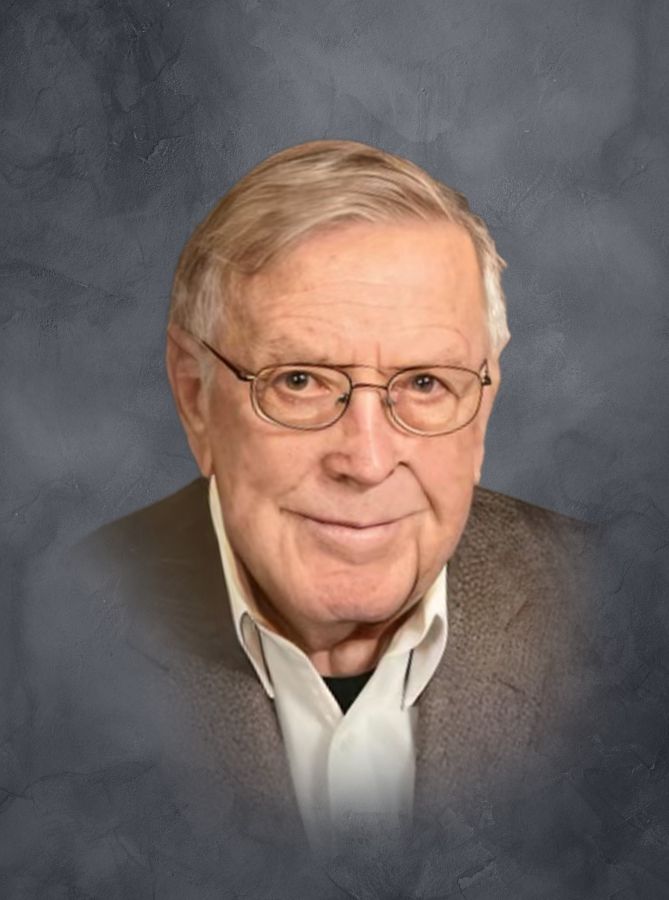 Thomas Raymond Carlyle, age 90 of Denison, Iowa, died peacefully on Monday, November 14, 2022, surrounded by family. Tom devoted his life to his family and his work, and is remembered by loved ones as a compassionate, giving man with a playful sense of humor who loved to travel the back roads of Crawford County and stop to chat with anyone who crossed his path.

Thomas (Tom) was born to H.B. and Margaret (Winkler) Carlyle in his family's home on January 8, 1932, on the triangle block which also housed the family business, Carlyle Memorials, west of the Crawford County courthouse. He was the youngest of four children.

Tom graduated from Denison High School, and was drafted to serve in the U.S. Army during the Korean War. He was a combat veteran specializing in air-conditioning/refrigeration for food storage for the troops.

Upon returning home, he married the love of his life, Janice Jeneal James on July 19, 1954, at St. Rose of Lima Catholic Church in Denison. They raised five children together.

Tom grew up working in the family business, and he became a full-time employee upon his return from Korea. He trained for six months in the monument business in Milbank, South Dakota, where he contributed to a memorial now in Arlington National Cemetery in Washington, D.C. - the first of numerous memorials he created for prominent individuals. In the mid-1950s, Tom and his brother joined their father in partnership at Carlyle Memorials, and Tom became the sole owner in the early 1970s. He was a third-generation monument dealer, and took care to provide design, quality, and workmanship in his work.

In the late 1950s, Tom became a co-founder of Crawford Heights Memory Gardens cemetery, a development that became, through years of hard work and family effort, a premier Iowa cemetery and the first in the county to have a flag display every Memorial Day, a tradition later followed by others. He was an entrepreneur with many real estate ventures through the years.

Tom was committed to serving his community in many ways. He was a Boy Scout leader for roughly five years; he served as the Crawford County Civil Defense director in the 1960s and 1970s; he was instrumental in bringing the 9-1-1 emergency system to Denison; he advocated for a new law enforcement center; he was on the Crawford County Memorial Hospital Board of Trustees from 1983 - 1992, and was a member of the Iowa Statewide Health Coordination Council in the early 1980s.

Similarly, Tom was deeply committed to his church. He was a member of St. Rose of Lima Catholic Church in Denison and was a Knight of Columbus in the Fourth Degree. He was the first lay minister for St. Rose of Lima.

He was an inaugural member of the Denison barbershop chorus and enjoyed singing with it for decades. Later, he sang in the men's chorus in the senior community where he wintered for several years. Proud of his Scottish heritage, he had an avid interest in genealogy, loved to travel (whether in a camper with his whole family or more widely with his wife as an empty-nester - and visited all 50 states), and he loved flea markets. Green was his favorite color, and he made sure every car he owned was green. .

He is preceded in death by his parents, his brothers, Bill Carlyle and Jack Carlyle, and his sister, Ann (Carlyle) Jensen, his daughter, Karen, as well as one grandson, Levi Greene, and one great-grandson, Corbin Gettino.

"I remember when I was in Odebolt, as pastor, and a tombstone had been damaged. Carlyle Memorial was the one that needed to replace it with the weather and once again, I was dealing with always honest Tom. It was always great to work with him on anything. Father Allan Reicks"

"It is with many memories and time spent with Tom and Janice that I find it difficult to realize his passing. There will always be an emptiness in my heart for him and a sadness felt for my friend Janice.. Blessings to the family and all who have known Tom and his impish ways. May God give the family peace with love. Virgie"

"Thinking of you Cindy and your family. May the wonderful memories of your father give you comfort and joy in the days ahead. "

"Our thoughts and prayers go out to Janice and families. Tom was a great man. He was so pleasant to talk with. Tom helped us when picking our parents' stones out. He will be missed. "

"We are so very sorry to hear of Tom's passing. I have many memories of Tom and us playing amongst the stones in the back. Hugs and prayers to you all!"