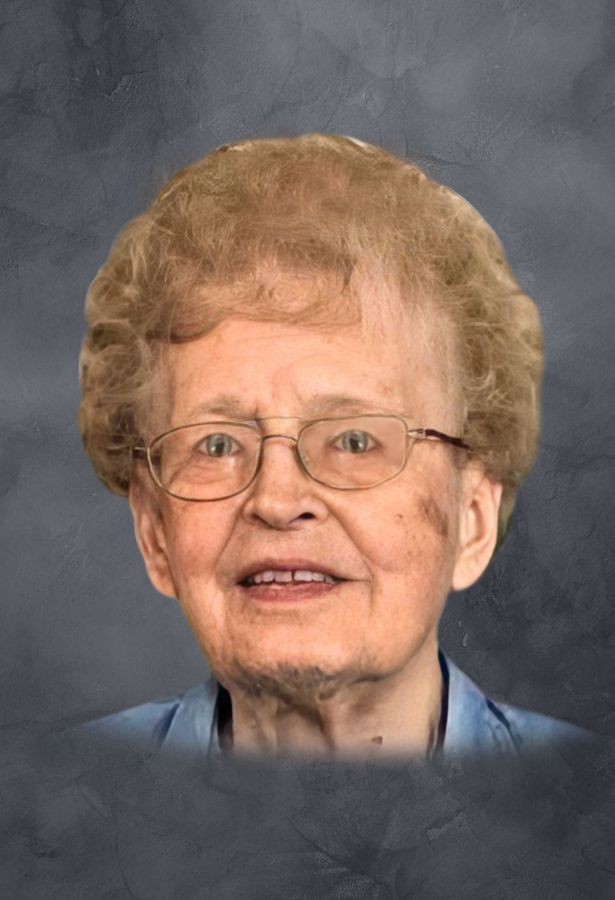 Genevieve Katherine, daughter of John and Rosa (Reissen) Christiansen, was born February 19, 1922, on a farm in Kenwood, Iowa. Gen grew up in Charter Oak until the age of 12, when she moved with her family to Denison. After graduating from Denison High School, Gen worked one year at the AAA office (now Consolidated Farm Service Agency). For the next seven years, she worked at Western Auto as a bookkeeper.

It was during this time that she met her future husband Walter Baker while roller skating in Denison. Walter became a member of the Army Air Corps and was stationed in Canada. During his first furlough, the couple were united in marriage on March 12, 1944, at Zion Lutheran Church in Denison. Gen wasn't allowed to go where he was stationed and she continued to work. After Walter was discharged at the end of World War II, he returned to Denison and became a grocer. Gen occasionally helped him in the business which took them to several different communities until they settled in Manning where they built a home in 1965.

Gen is probably best remembered for the 30 years she worked at the Manning School. She was secretary for the school district superintendent for 17 years and then became secretary for high school Principal Don Ringgenberg. In 1977, Walter died suddenly while opening the grocery store. In 1996, Gen decided to return to her hometown of Denison.

"Gen was the longtime secretary at the Manning Community School for at least thirty years. She was my secretary for over half of those years, and hardly missed a day. She was a dedicated employee, bright, and enjoyable to work beside. She was also a dedicated Christian. I enjoyed working with Gen all this years and was fortunate to have her in-charge of the office."

"My sincere sympathies for the family. My dad knew Gen's parents as they all lived in the Kenwood area. I continue to live here. We mentioned that connection many times when I would see her. She was a beautiful lady inside and outside."

"Oh, my. So sorry to hear of your loss. I'm in Manning this weekend and was hoping to stop in and see her again. She lived a nice long life. Was a gem to work with. My deepest sympathies for your loss."