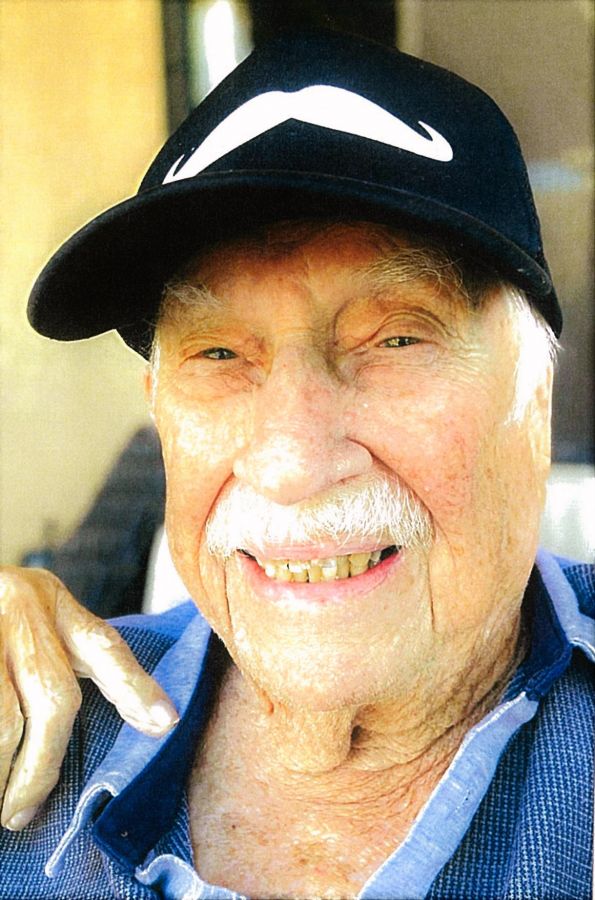 On January 11, 1944 the B-17 Bomber "Chief Sly's Son" was shot down over Germany. By luck and determination, Radio Operator Albert J. Malcos parachuted safely to the ground and lived to tell the tale.

Al spent the next 15 months as a POW in Stalag XVII-B. He witnessed some horrifying things as a prisoner, but he always talked about those final moments in the plane when it was on fire and going down and making the quick decision to jump. This action saved not only his life but was a pivotal moment in the lives of many others.

Albert Joseph Malcos, surrounded by his family at his home in Phoenix, peacefully passed away on Monday, June 20, 2022. He was 101. He is survived by his wife of 72 years, Carol, and his four daughters, Vicky Holly, Debby Barry, Andrea Pietrenka and Mary Prochnow as well as ten grandchildren and nine great-grandchildren. His son, Bobby, preceded him in death.

Al was born in New York, but at a young age his family moved to Chicago, Illinois, where he grew up, met and married Carol, and helped to raise their children. Al was a teacher at a junior high school. He loved his home in Edgebrook, especially his yard and hammock, and riding his bike through the forest preserve. Although Al adored his home and family and friends, Chicago would not be the final chapter in his life. In 2017, Al and Carol were whisked away to Phoenix where he spent his remaining years in the care of his loving family.

Al was fond of margaritas. He was a good napper, a studious and voracious reader, a kind man, a philosopher, a proud Grandfather, and a White Sox fan. He loved to get together for a Bears game on Sundays with his son-in-law, Tim. Al prized good greasy food-ribs especially-and to have a meal with Carol. He was a colorful raconteur and would often hold court capturing the attention of whoever happened to be in the room. Some of his favorite topics for discussion included: the war, travel, housing costs, bowling, baseball, kids these days, tips for a happy marriage, the daily schedule, his daughters, old movies, Vicky's household management and, most humorously, what to do when the conversation goes quiet. His answer: talk, say something, anything, just so long as the dialogue keeps on going.

For those unable to attend, the service will be live-streamed at the following link: https://vimeo.com/722753070

"The service was a lovely tribute to a life well lived and a clear legacy established. It told the story of a courageous man who knew how to love and was loved deeply in return. His legacy lives on through the many relationships he developed most importantly his daughters, grandchildren and great-grandchildren. Al loved Carol with a fierceness and devotion above all else. "

"Uncle Al was always the coolest. When I was around I always felt super at ease and comfortable. Great man who served his country. I still tell people he was WWII vet. "

"Getting old is a gift. I know it was hard for my dad to believe that- I guess because it was a gift to us. Love you dad and miss you. Love andrea"