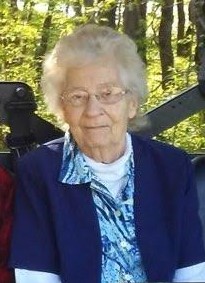 Lorraine Grigsby
Lorraine L. Grigsby, 91, Canton passed away on June 7, 2022 at Red Oak Estates. She was born on March 9, 1931, a daughter of Joseph E. and Nellie Mae (Street) Lehnhausen. She married John Grigsby Sr. on September 27, 1951 in Lewistown. He preceded her in death on December 25, 2020.
She was also preceded in death by her parents, three sons; John Jr., Michael and Kevin, five brothers; Bill, Joseph Jr, George, Richard, Louis, and five sisters; Bernice, Dorothy, Marion "Betty", Donna and Helen.
Surviving are her three daughters in law, Luann (late John Jr.), Teresa (late Michael), and Angie (late Kevin) as well as 5 grandchildren and seven great grandchildren and one brother, Dale "Bud" Lehnhausen of Fairview, one brother in law, Kenneth(Geri) Grigsby of Canton.
Lorraine enjoyed crafting, wintering in Florida and spending time with John. She made excellent pies that people fought over when she shared them.
Teresa, Christina, Kelly and Erik would like to thank the staff of Red Oak Estates and Memory Care for showing John and Lorraine tremendous care, affection and compassion during the last 4 years. Covid may have taken away the ability to visit often but we knew they were in amazing hands!!!
Cremation rites have been accorded and a private burial will be held at a later date. In lieu of flowers, memorials can be made to St. Jude Runs Canton to Peoria Run.
To leave online condolences, please visit www.oakshinesfuneralhome.com

"Our deepest sympathy on your loss. We met John & Lorraine at Twin Lakes near Bartle Lake, MN. They were an amazing couple. We visited them at their home, also in FL, and they came to SD for our 25th anniversary. Thoughts and prayers."

"Sorry for your loss. It was an honor and privilege to know Lorraine and John. I\'m one of the cook\'s at Red oak Memory Care. Lorraines\'s pies must have been good John would ask me if I would like for Lorraine to help me and that she made the best pies around. I miss them both dearly."

"My heartfelt sympathy and prayers to the family, God binds up the brokenhearted and saves those crushed in spirit. Psalms 34:18 "

"You and John were so cute together at red oaks. I won\'t ever forget either of your faces. Rest In Peace Lorraine. Many Condolences to her family and friends. "