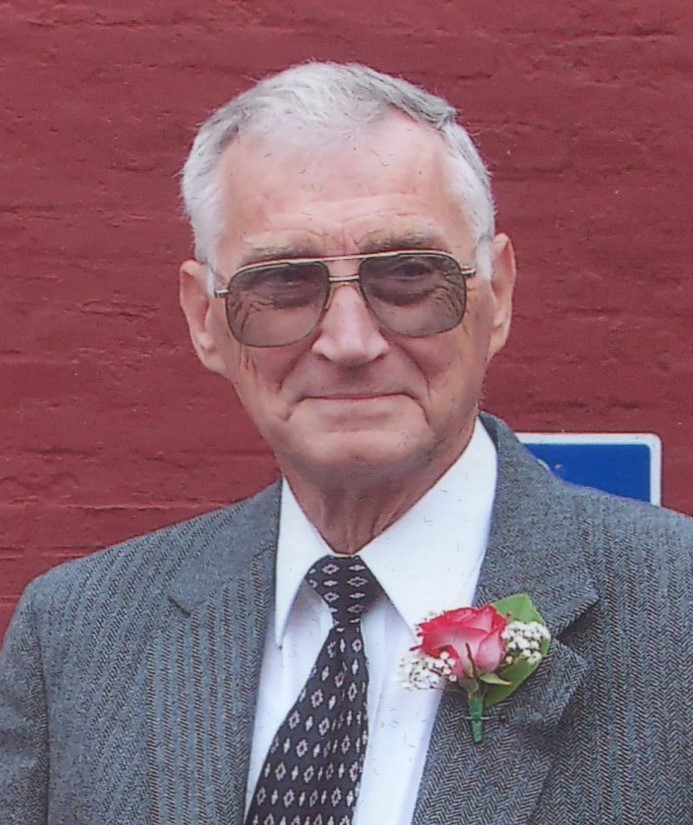 Galen W. Mahoney, 95, of Fairmount, died Tuesday, May 10, 2022, at Colonial Oaks Health Care.
Galen was born on June 17, 1926, in Miami County, Indiana, son of the late Walter and Edith (Bigger) Mahoney. Galen graduated from Fairmount High School in 1945 and was a Corporal in the Army from 1950-1952 during the Korean Conflict. Galen married Betty Ann (Harshman) on October 11, 1952. She preceded him in death on July 21, 2008. Galen had been a press operator at Linley Box, worked for Commercial Motor Freight and retired in 1985 from Grant Distributors. After retirement, he worked at Fairmount Pro Hardware for many years. Galen was a loving family man. A quiet starter for his community, he was a founder of Helping Hands, Fairmount Youth League, and the Fairmount Fireworks. Galen and Betty loved a good road trip out west with a grandchild in tow. He also enjoyed going to the Casino and Las Vegas. He enjoyed working around the house and yard. Galen was an avid White Sox and IU fan. He was a member of the Fairmount American Legion post 313 and attended Fairmount Wesleyan Church.
Galen is survived by his son, Steven ( Sheryl) Mahoney, Marion; daughter Gail Ann (Billy) Williams, Fairmount; grandchildren, Christy (Julie) Mahoney, Marion, Anna (Brian) Richards, Fairmount, Chris (Annette) Woody, Marion, and Niki (Steven) Hubbard, Alexandria; great-grandchildren, Mason and Lucas Richards, Kinzie, Olivia, and James Hubbard, and Jessie Woody; several nieces and nephews.
Galen was preceded in death by his parents, wife, brothers, Harry (Jean) Mahoney, and Gerald (Marjorie) Mahoney; sister Vera (Milton) Neeley; and son, Michael Larry Mahoney; a niece and a nephew.
Services for Galen will be held at Armes-Hunt Funeral Home and Cremation Services, 415 South Main Street, Fairmount, Indiana. Visitation is Sunday, May 15, 2022, from 2- 6 PM. The funeral service celebrating Galen's life will be Monday, May 16, 2022, at 10 AM with Pastor Randy Murphy and Pastor Richard Deisler officiating. Burial will follow at Park Cemetery, Fairmount with military rites.
Memorial contributions may be made to Helping Hands in care of the funeral home.
Memories and condolences may be shared at www.armeshuntfuneralhome.com