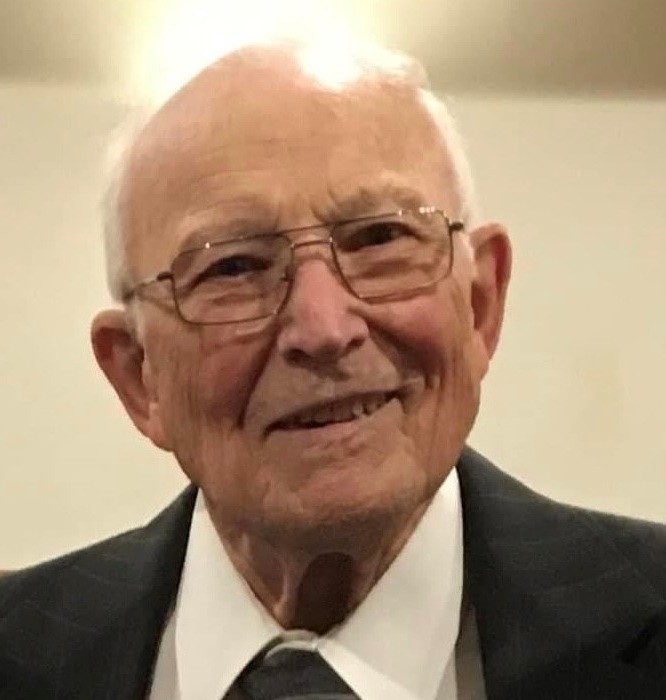 Donald C. Kemper was born at Shickley, Nebraska on May 27, 1925. He entered into rest on April 18, 2022 in Omaha, NE.
Don grew up in Valley, NE and also lived in Waterloo before he settled in Omaha. He was inducted into the 80th Division of Infantry, 3rd Army Corp, on April 4, 1944, serving in WWII Europe. During his 41 years in the military, he was awarded a Combat Infantryman's Badge, Bronze Star, Silver Star, and a Purple Heart. When he left the service, he remained in the Army Reserves and also served in the Air Force Reserves at Offutt Air Force Base as an x-tray tech. He earned miliary titles of MSGT USA and USAR, USAFR RET.
Upon leaving the war, he worked for Northwestern Bell for 36 years. He started as a lineman and worked up to a trouble analyst position when he retired.
All during his life, he was very active in several organizations, many alongside his wife. He enjoyed the Masonic Camping Club Straddlers #47, Purple Heart Chapter #260, and was a member of Morning Star Lutheran Church. He belonged to Mizpah Masonic Lodge #302, Knights Templar, Omaha York Rite, Scottish Rite, Tangier Shrine, Omaha Chapter #19 Sojourners, Heroes of '76, Aksarben Chapter #277 Order of Eastern Star, and Telephone Pioneers. He served as a Cub Scout leader, Assoc. Guardian of Bethel #13 and Assoc. Grand Guardian of Nebraska Job's Daughters. He also belonged to the German-American Society and Veterans of the Battle of the Bulge, American Legion #1, VFW #247 and the DAV.
He loved to travel and always considered himself very fortunate to be able to see 20 different countries and go from one coast of the USA to the other coast and from north to south. He even loved to assist with plowing, haying, thrashing and corn picking on his father-in-law's farm while he was still farming.
The greatest joy came when he had grandchildren. His love and pride of his grandchildren could be heard when he told others about what they were doing and what they've accomplished.
He was preceded in death by mother Meta Kemper, father Clarence Kemper, and brother-in-law William Porter.
He is survived by his wife of 68 yrs and 10 months, Elaine (Buschmann) of Omaha; sister June Porter of Germantown, TN; son Scott of Union, Ne; daughter Candice (George) Sip of Logan, IA; grandsons Erich Haas and Joel (Kate) Haas of Omaha; granddaughter Lena (Nick) Evans of Hickman, NE.
VISITATION 5:00 to 7:00 P.M., Thursday, April 21, 2022 at Forest Lawn Funeral Home. SERVICE 9:00 A.M., Friday, April 22, 2022 at Forest Lawn Funeral Home. Burial with Military Honors at Forest Lawn Cemetery. In lieu of flowers, memorials are suggested to Morning Star Lutheran Church, Shrine Children's Hospital or Wounded Warriors Family Support of Omaha.

"Elaine, so sorry for your loss, always enjoyed our visits at the annual Memorial Day Service at the West Blue Church, ,Don was a proud member of the greatest generation, we are all thankful for his service to our country. Mark & Sue Kemper, Lino Lakes, MN"

"We were honored to take Mr. Kemper on the September 2008 Honor Flight to D.C. Evonne and I are sorry for your loss. "

"Elaine, sorry of Don's death saw in W.H. paper. May the peace of our Lord, Jesus give you peace of mind as days go on....thinking of you Minnie J."

"Sorry for your loss. Father Job gave a great story. He will be missed. Nancy (Simmons) Bouc Job's Daughters bethel#18"