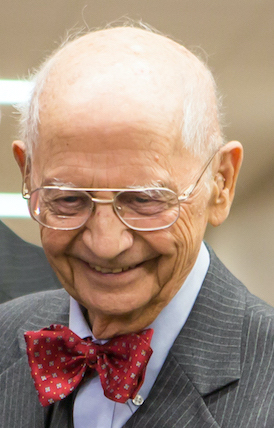 After a long, distinguished life as an educator, a family man, a man of service to his country, John X. Jamrich passed away on February 20, 2022 in Savannah, GA, surrounded by family. At age 101, he was preceded in death by his wife, June, and sister Ann Smith. His daughters, grandchildren, and great-grandchildren remember him with love.

He was born near Muskegon MI in 1920 to Slovakian immigrant parents, his father ran a small farm, his mother sold butter and eggs to the local town. In his toddler years his mother traveled back to Slovakia with young John and his sister. They stayed there for several years. John learned the ways of rural village life, herding cows and enjoying time within the extended family.

When he was nine years old, the family re-entered the U.S. to reunite with their father, now a factory worker in Cudahy, Wisconsin. Young John had forgotten his English, but set himself on a fast track of mastering the language, a sense of educational motivation that became a theme for the remainder of his life.

As a teen, he excelled in academics, music, and athletics, graduating as Valedictorian. Piano was his passion, and he seriously considered a career in music. He played piano every evening --Chopin and Mozart. "It was the background for our lives," said one of his daughters, "and established a life-long love of music."

Instead of becoming a concert pianist, he turned to the field of higher education, eventually graduating from Ripon College, University of Chicago, and Northwestern University. During the war years, he enlisted. Fluent in multiple languages and trained in meteorology, he was assigned to the U.S. Army Air Corps in Alaska as a liaison officer, deciphering weather patterns for our then-allies, the soviet pilots flying US planes across the Bering Strait under the Lend-Lease program.

In 1944 he was granted leave for a brief trip to Kenosha to marry the love of his life, June Hrupka. They had known each other since childhood, both from the close-knit Slovak emigrant community of Wisconsin. They remained married for 75 years.
At war's end, he finished his education and began his career with college administration, beginning in Iowa and Nebraska then onward to Michigan, where he worked for the state legislature and for the MSU College of Education.

In 1968, he embarked on the mission most dear to his heart: the presidency of Northern Michigan University. His accomplishments remain in the form of rigorous academic programs, autonomous student life, and substantial investments in infrastructure. But the Marquette area also introduced Jamrich and his family to the pristine beauty of Lake Superior and the north woods. As one family member reflected, "Spending time at camp, picking blueberries, hunting mushrooms, and casting a line for the elusive bass are U.P. experiences we all cherish."

During his tenure as NMU president, Dr. Jamrich led the effort to build nursing, criminal justice, computer science, and ROTC programs. The university had an NCAA II national championship football team in 1975. The hockey team was established in 1976 and went on to win their first CCHA championship in 1980.

In a partnership with the American Indian Community, the university established funding for the Nishnawbe News and Beatrice Medicine, a noted American Indian anthropologist was the speaker at the 1979 commencement.
He supervised construction of the Learning Resources Center, the original Jamrich Hall, Jacobetti Skills Center, the PEIF building, Cohodas Hall, and Kaye House.

Dr. Jamrich handled controversies such as faculty unionization and student protests. He negotiated solutions with a hands-on approach that included open office hours, established lines of communication, visits to dorms, and lunches with students.
During his 15 years at NMU he conferred degrees to 24,000 graduates--most of which were personally signed with Jamrich's distinctive signature.

"Dr. J" retired from the NMU presidency in 1983. His remarkable energy continued. He lent expertise as a consultant to several entities involved with higher education, including Michigan State University and the Michigan legislature. After moving to warmer climes in Florida, he and June put in thousands of hours as volunteers, notably performing music at nursing homes and at Mayo Clinic in Jacksonville, FL. They made many trips to the homes of their three children, enjoying the progress of his four grandchildren. Through meticulous research and months of editing, John created a detailed illustrated book of family history, a precious legacy for generations to come.

In 2014, he was honored with the naming of an impressive state-of-the-art instructional facility, the John X. Jamrich Hall. He served as keynote speaker at the opening ceremony. It was a fitting finale for the last time he would see the Upper Peninsula, and the university that he loved.

A private graveside service service will take place this summer at the Park Cemetery.

Those wishing to make an expression of sympathy are kindly asked to consider the John X. and June A. Jamrich Music Scholarship c/o of the NMU Foundation, 1401 Presque Isle Ave., Marquette, MI 49855.

Canale-Tonella Funeral Home and Cremation Services is serving the Jamrich family where memories of Dr. Jamrich may be shared at canalefuneral.com.

"So sad of hearing of Mr. Jamrich's passing, may he rest in peace. Bethlehem Lutheran Church, Jacksonville Beach, FL"

"I just learned today of Dr. Jamrich's passing. What an extraordinary man! I am an employee of Mayo Clinic in Florida and had the privilege of spending precious time with Dr. Jamrich often during or after his playing the piano. I don't remember the exact number of hours he had played but I know it was in the thousands. In fact, he would tell me that he held the record for the most hours played. We became fast friends. He was very personable and a great joy to be around. His smiling face and bow tie will be missed. Rest in Peace my friend!"

"I was an undergrad at NMU from 1968-72. In March 1971, Van Antwerp dorm hockey team was playing the TKEs at the Palestra for the campus championship. I wrote a hand written letter to Dr. Jamrich and invited him to the game. He showed up, with the trademark bow tie, and stayed the entire game. He sent me a handwritten thank you note saying that he enjoyed the game. RIP Dr. Jamrich. "