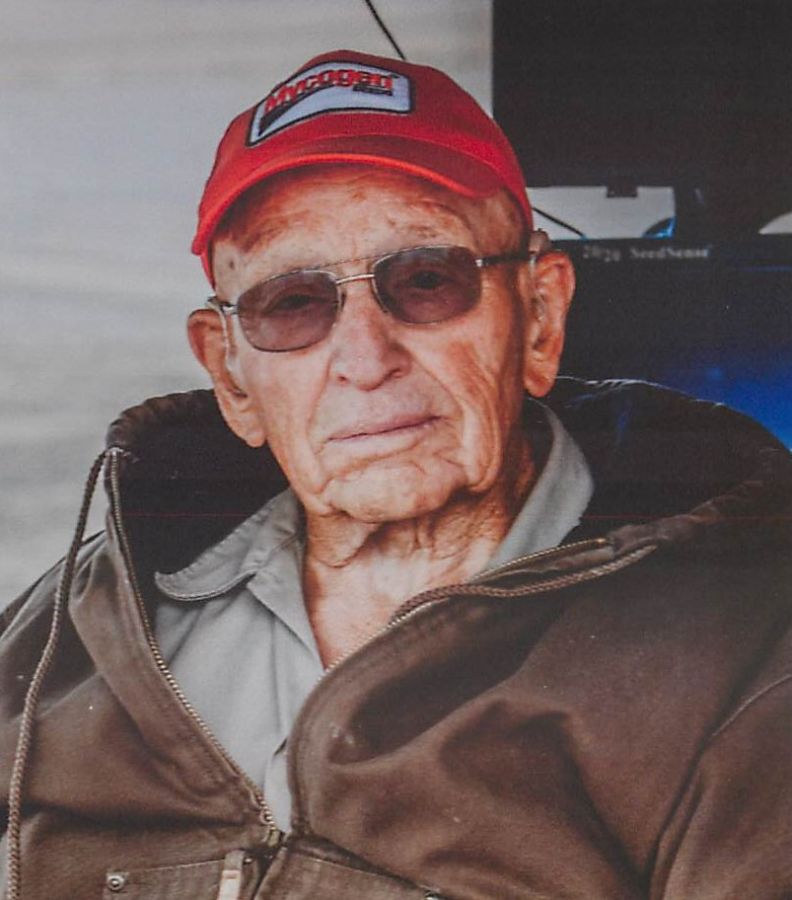 William "Bill" Hays, 98 of Malvern, IA, passed away Monday, January 10, 2022. Funeral services will be held at 10:30 a.m. on Saturday, January 15, 2022 at the Loess Hills Funeral Home in Malvern. Burial will be in the Malvern Cemetery. Visitation at the funeral home will be held one hour prior to the service, beginning at 9:30 a.m. Loess Hills Funeral Home is caring for Bill and his family.

OBITUARY
William Brice Hays, 98 of Malvern, IA, passed away on January 10, 2022 at Methodist Jennie Edmundson Hospital in Council Bluffs, IA.
Bill was born in a farm house on May 29, 1923 in Adair County, Missouri, the oldest of five children, of Brice Leland and Mabelle (Waddill) Hays. He attended schools in Missouri and later in Mills County, Iowa when his father moved the family to a farm north of Malvern. The family moved to a farm south of Malvern and Bill attended school at Strahan Consolidated School, graduating in 1941. He attended college in Kirksville, Missouri then rejoined his father Brice in the family farming operation. He and his father acquired more farm ground over the years. Along with farming Bill also had a cattle-feeding operation as well as hogs for a number of years. He started out farming with horses to owning tractors that could drive themselves. Bill was a lifelong farmer, he never retired.
Bill met Margaretta Mays Brown, a newly hired teacher for the 1943-1944 Strahan school year; hired by his father, who was president of the school board. The couple was united in marriage on February 11, 1944 at the United Methodist Parsonage in Malvern. They made their home on the Fred Davis farm south of Malvern, which Bill's father had purchased. Bill and Margaretta were blessed with four children, Sharon Kay, John Brice, Sandra Lou and Robert William.
Bill was the longest member of the Malvern United Methodist Church and was a member of the Mills County Farm Bureau. He enjoyed reading, visiting, and spending time with his family and grandchildren. Bill was a hard-working man and a great caretaker of livestock, his land, and was very progressive in the farming operation. He passed down his strong work ethic to his children and grandchildren. Bill will be truly missed by those who knew and loved him.
Bill and Margaretta were married 64 years when Margaretta passed away on September 9, 2008.
In addition to his beloved wife, Bill was preceded in death by parents; his infant daughter Sharon; son-in-law Chester Smith; daughter-in-law Janice Hays; brother James Hays; sister-in-law Selma Hays; and brothers-in-law, Michael Bubalo and Del Kohler.
Bill is survived by his children, John Hays of Lakewood, WA, Sandra Smith of Malvern, and Robert Hays and wife Betty of Malvern; 7 grandchildren;16 great grandchildren; 4 great-great grandchildren; brother Al Hays of Red Oak, IA; sisters, Kathy Bubalo of Blue Springs, MO, and Anne Kohler of Omaha, NE; nieces and nephews; other relatives; and a host of friends.

"While deeply saddened by Bill's passing, I will always fondly remember his hearty laugh and infectious smile. In this time of sorrow, our love, thoughts and prayers to all of Bill's family and friends."

"Sending my deepest sympathies to the whole Hays family. It is sad when the Patriarch of the family leaves you and all of the knowledge goes with them. I bet you could spend hours listening to Mr Bill's stories. I imagine there is a part of him in each one of you. Blessings and Love to you all and maybe a hug thrown in too. Pat Winters Mintle"

"Every conversation with Grandpa Hays I would learn something new while picking at his amazing wealth of knowledge. This past summer his clarity of thought and coherence was extraordinary. Even so he carried this with quiet humble spirit. I am truly honored to know him, and I will long for those conversations that would carry into the night. Ending with this: The prosperity of this country was built on the backs of men like him. I can only hope that we will see another generation of men like his in our future. Russell & Sonja Marwitz"

"My thoughts and prayers go out to Uncle Bill's family and the entire Hays clan. My impression of Uncle Bill is described in Paul Harvey's narrative titled "So God Made a Farmer". I encourage all that knew Bill listen to it as you remember Bill. Dr. J. Scott Hays"