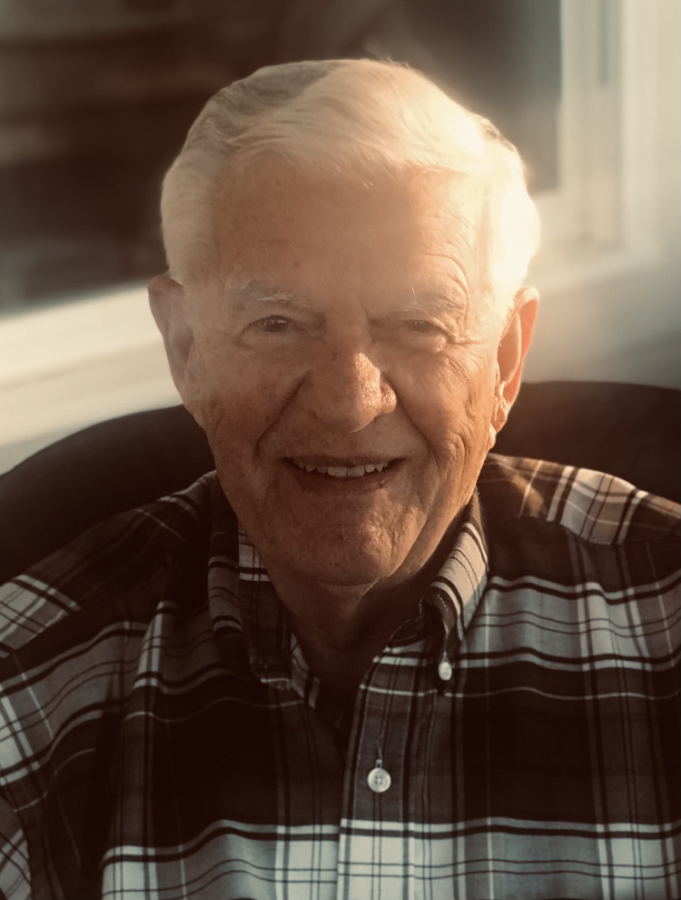 Bob was born in 1930 in Slatersville, RI to Alice (Remy) Theroux and Donat Theroux. Bob graduated from Burrillville High School in 1947 and served in the US Navy, from which he was honorably discharged in 1952. He attended Wentworth Institute of Technology, graduating from the Steam and Diesel Engineering program in 1956. He then moved to Connecticut to start a long career with Terry Steam Turbine Corporation. In 1957 he married Isabelle (Carroll) and together they raised three daughters. Bob and Isabelle moved to Wellsville, NY in 1987, and he began a long and happy retirement in 1992.

Bob could turn his hand to anything, be it building a porch, renovating a kitchen, or restoring an antique motorcycle. He enjoyed riding motorcycles and had a number of other hobbies including playing tennis, HO gauge trains, and radio-controlled model airplanes. Bob loved dogs and could regularly be seen walking his beloved Kia, and later Callie, around Wellsville.

Bob was predeceased by his wife Isabelle and also by his only sister Claire (Theroux) Cahill. He is survived by his daughters and sons-in-law, Christine and Thomas Sayles of Mount Pleasant, SC, Pauline and David DiSciacca of Enfield, CT, and Claire and Dipen Parekh of Amersham, UK. He is also survived by a granddaughter, two grandsons, two great-granddaughters, two great-grandsons, and many nieces and nephews, including Kathy (Cahill) Leclerc of North Smithfield, to whom he was especially close.

A Mass of Christian Burial will be celebrated Friday, November 26, 2021 at 10AM in St. John the Evangelist Church, 63 Church St., Slatersville and may be viewed live online at https://client.tribucast.com/tcid/7683756126 Arrangements are under the direction of the Holt Funeral Home, 510 South Main St., Woonsocket. In lieu of flowers, memorial contributions may be made to the SPCA-Allegany County, P.O. Box 181, Belmont, NY 14895 and online at spcaallegany.org or to the Alzheimer's Association at www.alz.org.

"It is with sadness but also with great memories that I leave these thoughts today. Having lost touch with the Theroux's after the girls grew up and Bob & Isabelle moved away, I do have fond memories of growing up living next door to the Theroux family. As a youngster, I spent hours watching as Mr. Theroux fixed things, puttered in his garage, and worked on his motorcycle. I know I can do things today based on my interactions with him. The Tager family always had a great time with the Theroux family, and now Bob is with Isabelle and Evie and Al, probably sitting in his screenhouse with a beer from the mini fridge. Those were the days. My condolences to Christine, Paulene, and Claire, as well as the extended Theroux family. Lee Tager Avon, CT CTFOPChaplain@gmail.com"