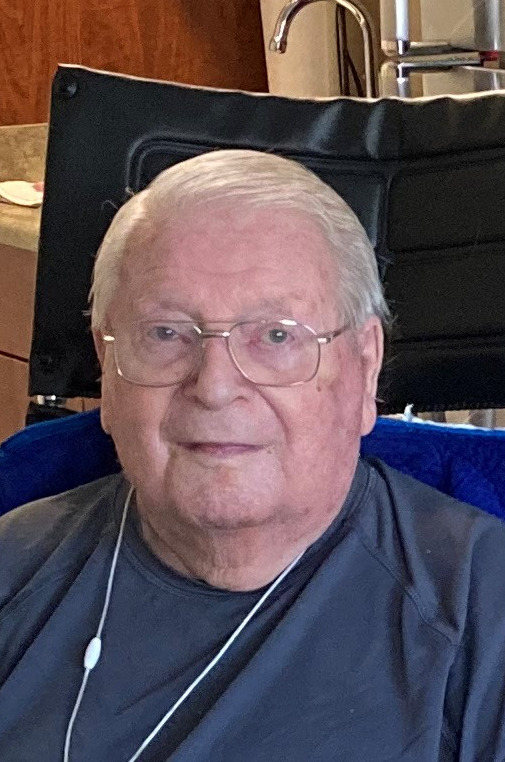 Charles J. Weigand, 95 of Phoenix, AZ passed away in his sleep on November 16, 2021 due to complications associated with Parkinson's Disease. Just as he dealt with all life's experiences, Charles managed his illness with strength and grace and passed as he wanted to, in his sleep.
Charles led a full and happy life. Upon graduating High School in 1944 Charles joined the United States Air Force where he completed 29 combat missions and 13 training missions during his active-duty years. He subsequently, remained in the Air Force Reserve for 20 years, retiring as a Master Sergeant. After completing his active duty, Charles married his high school sweetheart, Marilyn and attended Oswego State University in Oswego, New York graduating in 1950 after just three years with a Master's Degree in Education. While at Oswego State he founded Sigma Gamma Fraternity, one of the first fraternities in the country open to all ethnicities and a brotherhood of which he was extremely proud. Following college, Charles went on to fulfill his passion to teach and educate in the field of Printing and Flexography, teaching for many years at Plainedge High School on Long Island and later as an Associate Professor and Professor at Rochester Institute of Technology in Rochester, New York. Upon retiring, Charles and Marilyn retired to Phoenix, AZ where both he and Marilyn joined and became involved with the Phoenix Elks Lodge No. 335. Charles became Exalted Ruler of the Elks in 1996 and remained active in the organization for 30 plus years.
In addition to being the Founder of Sigma Gamma Fraternity and marrying the love of his life, Marilyn, one of Charles' greatest accomplishments was being a father. He always wanted a large family and considered himself lucky and blessed to have seven children. His children call their dad a truly amazing man. A man of integrity, grit, faith and constant and unwavering love. He was always there for them through the ups and downs of life and taught each of them the importance of family, hard work and honesty.
In addition to his wife of 73 years, Marilyn G. Weigand, Charles Weigand (Deborah) is survived by his children: Charles Weigand of Phoenix, Patricia Sorber (Robert) of San Rafael, CA, Janet Shipley Murray (Tim) of Anthem, AZ, Joan Camardo (Paul) of Phoenix, AZ, John Weigand (Kim) of Litchfield Park, AZ, Lyn Weigand of Phoenix, AZ, 12 Grandchildren and 18 Great Grandchildren. He was preceded in death by his parents Charles and Minnie Weigand and his son William Weigand.
There will be a visitation on Wednesday, December 1, 2021, from 3-5 p.m. at Hansen Desert Hills Mortuary and Cemetery located at 6500 E. Bell Road. His family will be present to welcome friends and family. A funeral service will be held in Ascension Hall at Saint Joseph's Catholic Church at 11001 N. 40th Street on Thursday, December 2, 2021 at 10 a.m.

"My thoughts and prayers to Marilyn and all the family. What a blessing to have had so many years with Charles. I only met him a few times, but he made such an impression on me - a kind, loving man with a cute sense of humor. May he rest in peace. Be gentle with yourselves during this difficult time. "