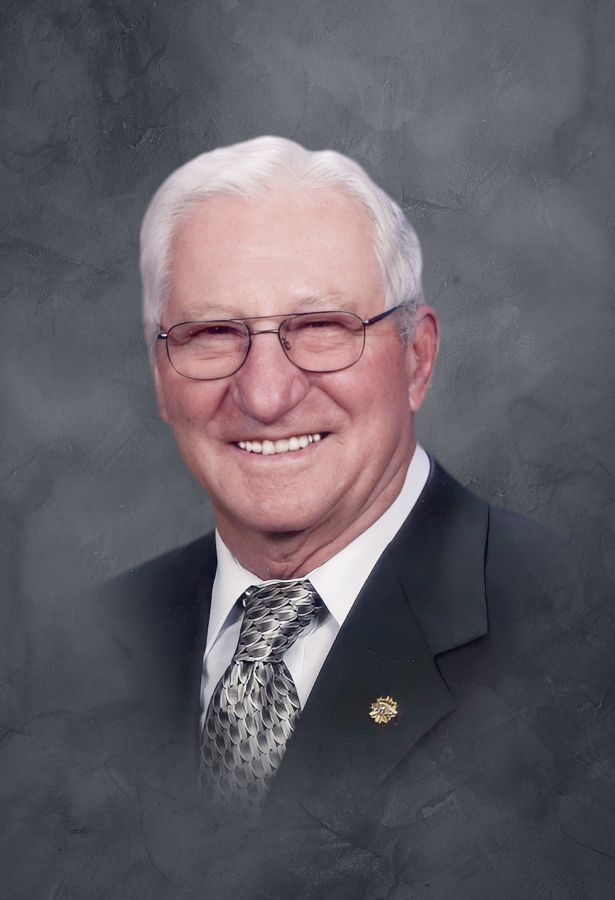 Robert Gail Crampton was born at home on a farm South of Denison, Iowa June 2, 1925, the son of Raymond and Opal Crampton. He was raised on several farms from Denison to Dow City, to Wall Lake, where he graduated from High School. Robert "Bob" left High School early to enlist in the Air Force at Camp Dodge on February 18, 1944, and became a ball turret gunner for the 483rd Bombardier group.

During his service in the European theatre of WWII, he flew 22 missions where he was shot down twice. When shot down over the Adriatic Sea, he was rescued by a British ship. His second time being shot down was over enemy lines and was injured. Robert was taken prisoner at an enemy hospital where he took an opportunity to escape and found refuge with a local family. He, as a missing in action soldier, found his way to allied territory in Italy. For his valor in the Air Force, he received two of the most prestigious awards given by the Air Force; 5 bronze stars and one victory medal. He then rose to the rank of Staff Sergeant in just one year.

After returning home from the Air Force, he attended Iowa State University for one year. Due to experiencing PTSD (which no one knew what this condition was or how to treat it) and his dad needing him back home on the farm, he left college. On June 6, 1948 he was married to Irene Elaine Belt at the United Methodist Church in Lake View, Iowa. Their union was blessed with two sons, Randy and Rick. They made their home in Storm Lake for few years where Irene worked at the Citizens Bank in Storm Lake, while Robert traveled Northern and Eastern Iowa testing dairy cows for Belt's Dairy in Storm Lake (owned by Irene's Uncle, Floyd Belt). Robert and Irene began farming North of Lake View while renting land from Hank and Hokie Peters. In 1956, they purchased their current farm north of Deloit, Iowa.

Robert was an active member of his church and community throughout his life. He joined the Masonic Lodge in 1952, and was honored as being a Potentate's Aid. He was a 4-H leader for the Kiron Winners for years. Robert originally was a member of Abu Bekr Shrine in Sioux City, and then joined the West Central Iowa Shrine Club in Denison. He felt privileged to assist in transporting families and their children to the Shriners Hospital in Minneapolis, Minnesota. He used his 1952 Chevy truck for the many parades as a member of the Animal unit of the Shriners and spent countless hours in the costume. He later was invited to the Royal Order of Jesters, Sioux City Court #124.

Robert and Irene had the privilege of attending the Inaugural Ball for President Ronald Reagan in Washington DC. He was a lifetime member of the Methodist Church in Wall Lake. They then joined the Deloit church where he donated his time, machinery and crop management for the benefit of the Church. His greatest enjoyment in life was spent with his family and friends, especially hosting them on the farm or at their Kiron home. He adored his grandchildren and great-grandchildren, often referring to them as his "little angels". He loved raising farm animals, taking care of his cattle like a shepherd. On the farm, you could often find Bob whistling in the morning while he was milking his cows. Robert and Irene enjoyed dancing at the Lake Wood Ballroom, and entertaining for card clubs with friends. Bob and Irene were very supportive fans of Rick and Randy 's school and sporting events from 1965 - 1975. He received the "perfect Euchre hand" during one of these events. Robert and Irene enjoyed being members of the Motor Iowa Club, traveling across Iowa with Gene and Gloria Bergman for several years in their 1952 Chevy truck.

At the time of his death, he had been blessed with 96 years, 5 months and 9 days. Including his parents, Raymond and Opal Crampton, Robert was also preceded in death by two sisters, Eula Mae and Bonnie, and two brothers: Donald and Herbert. Those remaining to cherish his memory include two sons: Dr. Randy (Cheryl) Crampton of Storm Lake, Iowa and Rick (Carol) Crampton of Kiron, Iowa, 7 grandchildren: Ben (Mahanaim) Crampton of Schleswig, Iowa, Ryan Crampton of Beverly Hills, California, Taylor Crampton of Des Moines, Iowa. Dennis (Jessica) Crampton of Sioux Rapids, Iowa, Carrie (Jay) Riesberg of Carroll, Iowa, John (Dora) Crampton of Fayetteville, Arkansas, and Katie (Scott) Meyer of Alta, Iowa. They were blessed with eleven great-grandchildren and four step great-grandchildren.

"Dear Randy, Rick and families, I was so sorry to learn of your Dad's passing. I am glad he had the chance to enjoy his children, grandchildren and great grandchildren. I hope you know how much everyone appreciated all he did for so many. May you find comfort in friends and family send loving thoughts at this time. Sincerely, Jodie Butler "

"Expressing love & respect to Bob Crampton family in memory of their Father. I was fortunate to become acquainted with Mr Crampton while visiting my father at Reed Place. What a joy & honor to be among these people called The Greatest Generation. "

"Rick & Carol and family, so sorry to hear of your loss. I had the pleasure of meeting your dad on several occasions and had know idea of his distinguished military carrier and community involvement. When I met him I found him to be a very pleasant man with love of his wife, family and farm with a beautiful twist on life. Long last the memories of a special man and God Bless you All. Pat Roiger "

"Sharing photo of Bob, my dad Bob Crampton, Charlie Crampton and my son Emmit Crampton Beal taken in 2011 in Vail, IA. We had many lovely visits with Bob and Irene and family in Iowa and treasured their times with us in Minnesota. There are people who light up rooms and lives. Bob was one of them. We know his social calendar is full in heaven; we are thankful for having known him. Our sympathy and love from Minnesota. Sherrie, Brad and Emmit"

"What a great guy! So sorry to hear of his passing. Richard and Judy Jepsen"

"Bob was certainly one of the nicest people I ever knew. My thoughts and prayers go out to his family. Tom Gustafson"

"I am so very sorry to hear this! Prayers to all the family. Bob was quite a character and I always enjoyed visiting with him in the beauty shop at the reed place. He took such wonderful care of Irene for years and would always visit her and pop his head in to say hi. When he became a resident, we had some great conversations. He always talked about the love of his life, Sweet Irene. May you rest together in peace!?"