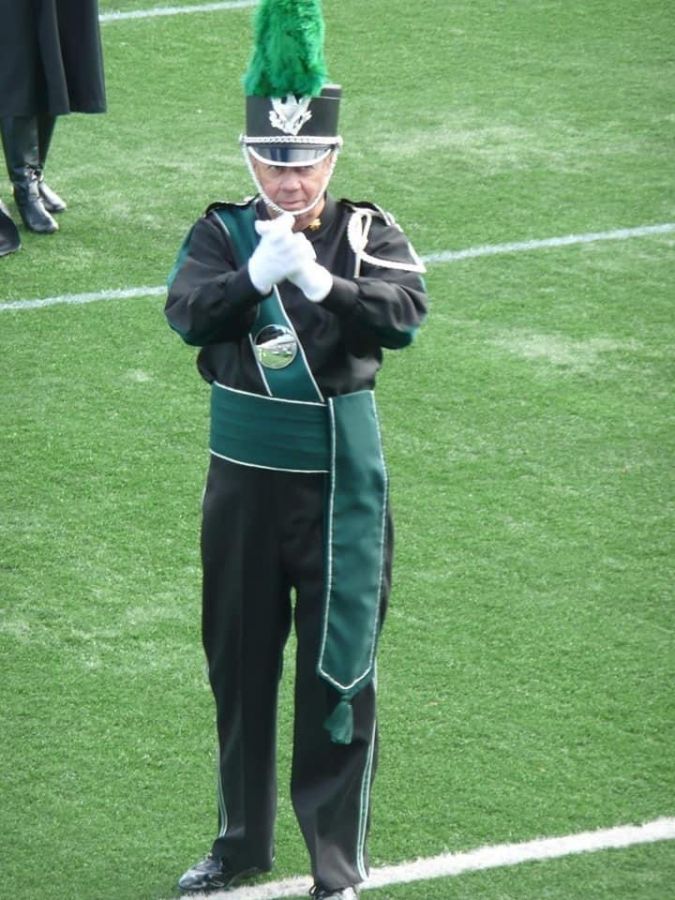 Robert James Bond, Sr.
Bob was born in Toronto, Canada on April 11, 1941. At a young age, he had to drop out of school to go work and help support the family. In those working years, Bob met a gentleman who introduced him to the Drum & Bugle Corps, and his life changed forever.
Drum Corps offered Bob lifetime memories and opportunities few people ever experience. It was Bob's lifelong passion that became the core of his being. Bob and his highly skilled, talented, and beloved Corps friends' collective contributions to Drum Corps touched the lives of thousands, directly and indirectly, including countless viewers, students, and co-musicians.
One of the highlights of Bob's Corps career was to be honored to be a member of the World Drum Corps Hall of Fame. His dear friend Tony Debellis shared this synopsis of Bob's Corps history: "Bob was involved in drum and bugle corps activity for more than half a century, beginning as a bugler in the Westhill Lions Club drum corps in Toronto. He was a member of such top Canadian corps as Preston Scout House, Toronto Optimists, Jolly Jesters and Canadian Commanders. Among his many roles he played soprano horn with New York Skyliners for three years before serving as business manager and drill manager of the Peterborough Crescendos. He became the drill writer and drum major of Kawartha Kavaliers in the Peterborough area. Moving back to New York state in 1979, he became director of the Greece Shoreliners in the Rochester area, and director of the Greece Cadets. He played and acted as drum major for the Hawthorne Caballeros. When the Empire Statesmen corps was founded by Vince Bruni in 1983, Bob joined the administrative staff and later returned to serve on the administrative staff again from 1999 to 2004. He marched as drum major of Mighty St. Joe's alumni corps during two separate periods. From 1981-1989 he was a marching and maneuvering judge and consultant and a drum major for the Mighty St. Joe's Alumni corps."
He met his wife, Diana, in Drum Corps and together they had 3 children, whom they also raised within the Drum Corps family. The love and friendships Bob. Diana, and his children have been blessed with by the "Corps family" enriched their lives in a way that is impossible to put into words, and they are eternally thankful to all of you that were part of his life.
Bob is predeceased by his wife, Diana, and his brother Barry. He is survived by his brother Nelson (Marie) Bond, his sons Kevin (Laney) Bond, Robert (Wendy) Bond, Jr., and his daughter Denise (Andrew) MacKinnon; grandsons Phillip (Nikki Cipparuolo) and Christopher Bond, Robert Bond III (Keila Olbrich), and step-grandsons Avery MacKinnon and Dylan Boprey. Bob was so proud of his children and grandchildren, he never tired of hearing from them, nor talking about them to others. To those very close friends of Bob's in most recent years, we thank you for your kind care and amazing friendship to our Dad.
The Bond family cherished many memories throughout their years together in Drum Corps. Every holiday and get together they reminisced about various years and championships. The children thought it only right to play drum corps music for Dad as he made his final journey home on November 4th, 2021, at the age of 80. He had a peaceful transition, surrounded by family. Bob's spirit, character, loving heart, descriptive stories, booming voice, and giant presence will be greatly missed. March on, Dad, we love you, may you rest in peace with Mom.
Our Dad's wishes were to have a celebration of his life amongst family and friends. The family will reach out to loved ones and friends in the near future with details.

"Bob was a very very dear friend of mine. We were like brothers. We could share personal problems with each other that we couldn't share with anyone else. I always enjoyed his company whether it was taking him to breakfast or lunch or a doctor's appointment, or even just sitting in his apartment and talking. He was a great man and a real gentleman. I will miss him very much. "

"Bob Bond was the drill writer for the Peterborough Krescendos and my first ever drill instructor. He would yell across the field, "Dougie Thrower!", (to this day for most Krescendos it's still 'Dougie'), "Dougie Thrower, I'm going to break your elbows if you don't hold them up!" I was 11 years old and I didn't want broken elbows so I decided I would hold them up. That's some damn fine teaching, right there. When I was a bit older and an instructor myself, Bob and I would run into each other at shows in upstate New York and after most seasons he would call me to discuss the Bluecoats and other corps he enjoyed. I never heard him disparage the changes in the activity which were and are, of course, inevitable. He was always grateful and proud just to be a part of it. That's some damn fine teaching, right there. Bob Bond was the first person to reach out to me when it was announced that I was to be inducted into the DCI Hall of Fame in 2019. I teared up when I heard his message. It began, "Dougie!" (see above) "Dougie! Bob here, your old drill instructor Mr. Bond. I just wanted to call to say that ... well ... to say that I'm proud of you, son." That's some damn fine teaching, right there. RIP, sir. And thank you."