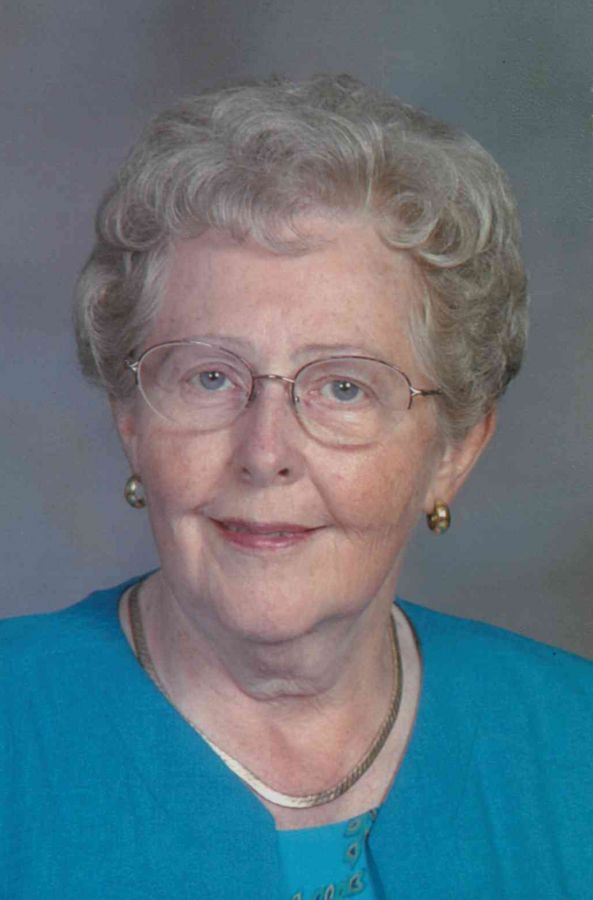 Funeral services for Eunice "June" Mechler will be celebrated at 10:30 A.M. on Monday, October 25, 2021, at the Good Hope Lutheran Church in Titonka with Reverend S. Kim Peterson presiding. Burial will be in the Buffalo Township Cemetery. Visitation will be held from 2-4 p.m. on Sunday, October 24, 2021, at Oakcrest Funeral Services in Titonka. The funeral service will be livestreamed on https://www.facebook.com/oakcrestfuneralservices.

Eunice Elda, daughter of Edward and Henrietta (Johnson) Dontje was born June 15, 1932, at the family home at Gerled, Iowa, She was baptized into the Christian faith at the First Presbyterian Church in Lakota, Iowa. At 5 years of age, she started school at the Ledyard Consolidated School. In 1946, the family moved to a farm northwest of Ledyard. Eunice then attended Grant Consolidated School, graduating in May of 1949. During high school, she played on the girls' basketball team.

In September 1949, Eunice began her nursing education. The first year she affiliated with Drake University in Des Moines for sciences. In her senior year, Eunice spent six months at the Cook County School of Nursing in Chicago, before graduating from Broadlawns Polk County School of Nursing in Des Moines in September 1952. Eunice then worked at the Blue Earth Hospital in Blue Earth, Minnesota, for three years.

On December 7, 1955, Eunice was united in marriage to Douglas Kay Mechler of Titonka, Iowa. They lived on the Mechler family farm south of Titonka where Eunice dedicated her life to being a farmwife and mother to her four boys, Dean, Brian, Kent and Dale. She also continued nursing on an as-needed basis at Blue Earth and other area hospitals.

Eunice was a faithful member of Good Hope Lutheran Church. She and Doug spent many years in Texas during the winter months. For several years after her husband's death, she continued driving to Texas on her own to spend the winters.

Eunice enjoyed playing cards, crocheting, embroidery, gardening, square dancing and day trips with friends in her later years. Her children, grandchildren and great-grandchildren were her pride and joy.

Eunice was preceded in death by her grandparents, parents, husband Douglas and two brothers, Eugene and Eldon.

"So sorry for your loss. My mom (Marlene Staloch) and Eunice used to drive to Texas and when we would go see mom in Texas we would see Eunice too. Your in our thoughts and prayers. Darcy, Tom, Shelby & Spencer Niebuhr"

"Kent and the rest of your family. You have my deepest sympathy. Thoughts and prayers are with you. "

"Dale and Connie and family . so sorry for your loss of your Mom. May she R.I.P."