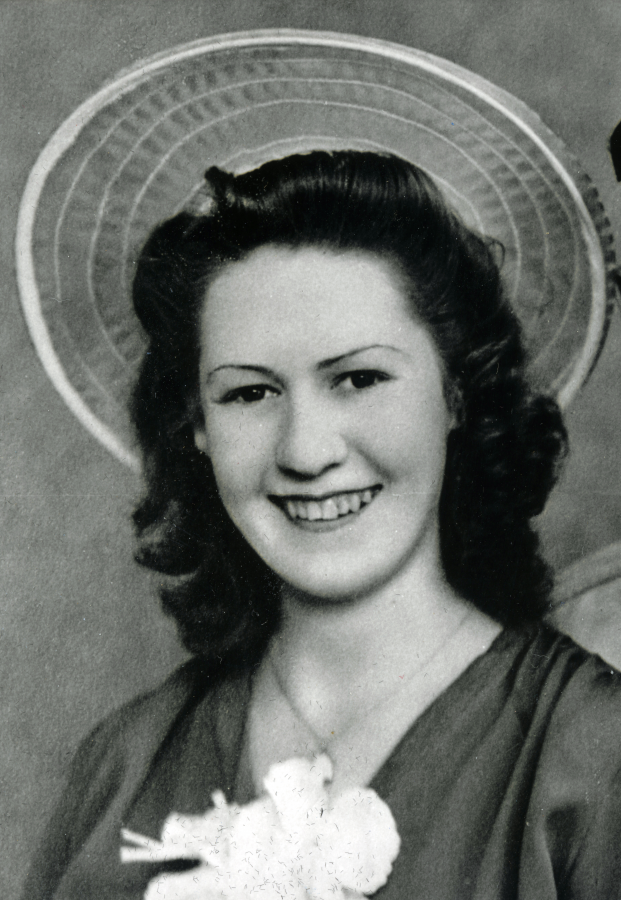 Joan Lindsey, age 94 passed away peacefully on October 8, 2021 surrounded by family. Joan was born in Bundamba, Queensland, Australia to Felix and Elsie (Bould) Harbort, one of five children. She attended Sacred Heart School, earning excellent grades and planned to go on to University, but her father's health caused her to start working to help support the family. This hardship made her a stronger person in willpower and faith.
She met the love of her life, Dell, who was stationed in New Guinea and also at Amberly AFB in Ipswich during WWII. They were married in St. Stephens Catholic Church. After the war ended, she left Australia on the SS Mariposa ship and landed in San Francisco where she was reunited with Dell and they traveled to Phoenix. She raised seven boys with love, patience, and a stern warning: "Wait until your father comes home". We learned many Australian phrases while growing up. Sometimes we didn't always fully understand their meaning, but they were fun to say. She was a devout Catholic and made sure all her boys were taught in Catholic schools. She was in a neighborhood group that recited the rosary practically every day. It allowed her to practice her faith and give her a break from raising seven boys.
She joined the Daughters of the British Empire Society, a group of mainly British and Australian wives who moved to America after marrying US servicemen. In it, she made many close friends and eventually became president of the local society. She was a homemaker, but managed to have time for a few hobbies, mainly needlework, cooking -especially using new recipes from her magazines, growing flowers and fruit trees, and entertaining. She would make booties for the grandchildren and blankets for the great-grandchildren. If there was a favorite activity, it was tending to her flowers and fruit trees.
In the backyard, she had rose bushes, and she planted various flowers every year, including gladiolus and sweet peas. Her favorite flowers were the sweet peas. She would give bouquets of them away to neighbors and sometimes she had us take them to the nuns who were our teachers. It was tough for a boy to take flowers to a teacher in those days, but we survived. She also had many fruit trees and made homemade jam from the apricots, peaches, and plums she grew. Her mango tree was her pride and joy and the fruit gave her a taste of home.
She loved to entertain and had yearly Christmas parties for her friends in the neighborhood. They always looked forward to her tasty homemade meals and great desserts. Another activity was her Easter celebration. People could bring dishes to share, but she would always provide her delicious potato salad and baked beans. After the meal, she would use her easy-going manner to cajole everyone into playing a trivia game or two before commencing the hunt for the "golden egg" by the grandchildren. The golden egg hunt was the highlight of the evening for the grandchildren and they treated it like an Olympic event, racing everywhere for the egg.

She was a wonderful and caring mother and leaves behind her seven sons Ardell (Jan), John (Gayle), Gary (Charlynn), Dennis (Jane), David, Tom (Robin), Jim (Lisa) and was loved by 16 grandchildren, 21 great-grandchildren, and 3 great-great-grandchildren, and sister-in-law Maude Harbort. She was preceded in death by her husband Dell, her two sisters, Marie and Lorraine, and her two brothers, Felix and Val. Visitation will be from 6:00 pm to 7:00 pm with a rosary starting at 7:00 pm, Wednesday, October 13 at Hansen Desert Hills Mortuary, 6500 E. Bell Road, Scottsdale. Funeral Mass will be celebrated at 10:30 am on Friday, October 15 at St. Thomas the Apostle Catholic Church, 2312 E. Campbell Ave, Phoenix with interment following at St. Francis Cemetery. In lieu of flowers, the family asks that donations be made to the St. Vincent De Paul Society, C/O St Paul's Catholic Church at 330 W. Coral Gables Dr. Phoenix, AZ 85023.

"Joan Lindsey was a saint in life. The most beautiful, kind woman I have ever met. I was lucky enough to call her Mom. Not a selfish bone in her body. We are all very lucky to have had her in our lives. My thoughts and prayers are with her family. Betty Peterson"

"Our condolences to our dear friends Gary and Charlynn, and to all the Lindsey family. We met Mrs Lindsey at the surprise party for Gary?s 70th birthday. She stood and said some sweet words about the birthday boy, and I have to say, I was VERY impressed that not only could she remember these things, but that she ? 93 then ? could still keep those seven sons straight in her mind. We heard enough stories from Gary to gain the sense that a strong and loving woman has left our world. Again, condolences to all her loved ones. Barbara and Scott Nelson"