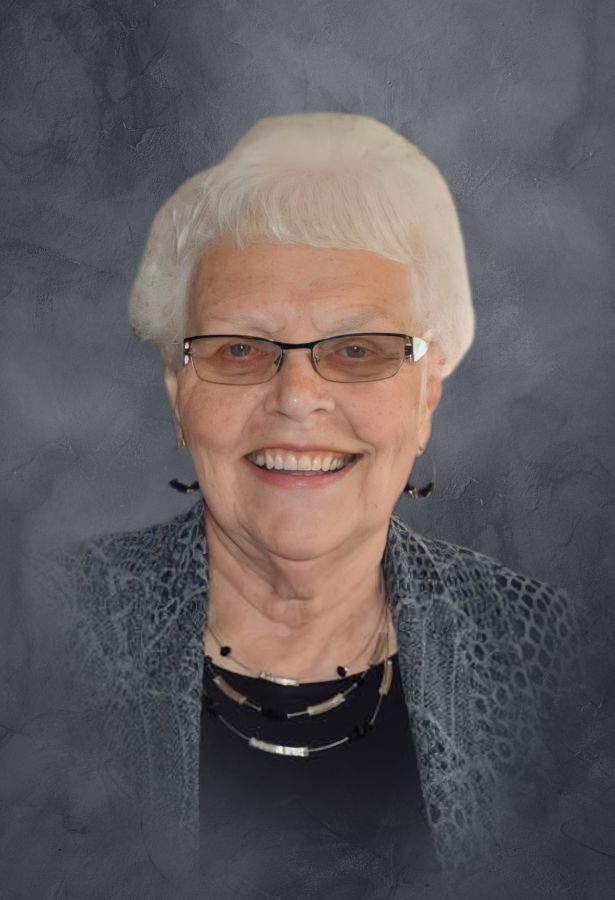 Elaine Caroline Carlson was born June 14, 1937, to Albert and Emma (Petersen) Marth at the hospital in Ida Grove, Iowa.

On August 31, 1956, Elaine was united in marriage to Walter Kortmann at Friedens Evangelical Church in Schleswig, Iowa. To this union three daughters were born: Penny (Joe) Ewoldt of Vail ; Roxanne (Russell) Wray of Mapleton; and Sheila (John) Rickers of Westside.

Walt and Elaine lived at the Hanover Church parsonage and did the custodian work, prior to moving to the Kortmann farm, one mile north. They both worked full time jobs; raised Angus cattle (Wako Angus) and exotic peacocks (Walt's Foul Fowl Farm); and cared for Walt's mother, Esther Kortmann. They also helped to raise their nephew, Tim Watts. They were married for twenty-eight years prior to Walt's untimely death in 1985.

Over the years, Elaine was employed at the Sioux City Stockyards Commission Firm Office, Dubuque Pack and Farmland, retiring in 1995. She had an unwavering faith in her Lord and during her lifetime was a member at St. Paul Lutheran Church in Hanover Township, and St. Luke Lutheran Church in Ricketts. She was in the Lutheran Women's Missionary League, and joined the group in Pasadena, California, to work on their Rose Bowl Parade float in 2016. She was a member of the Rickettes, Ricketts Community Club, and was awarded the honor of "Citizen of the Year" in 2011.

Elaine enjoyed singing, dancing, gardening, and casino hopping. She was a farmer, a cook, a caregiver, a card player, and a friend to all. Above all, she loved attending family activities and spending time with her family. She was the best wife, mother, grandmother, and great-grandmother who will be deeply missed by all.

Elaine passed away at home on Thursday, September 30, 2021, attaining the age of eighty-four years, three months and sixteen days. In addition to her parents and grandparents, she was preceded in death by her husband, Walter Kortmann; her brother, Norman (and wife, Norma) Marth; her parents- in-law; four sisters-in-law: Vera Wiegel, Alice Alberts, Paula Ruchti, and Dorothy Lutz; one brother-in-law, Larry Carlson; and one great grandson, Chance Julin.

Left to cherish her memory are her husband, Lloyd Carlson of Ricketts; her children; sisters-in-law, Wilma Gundy and Donna Carlson; 20 grandchildren; 28 great-grandchildren; many nieces, nephews, cousins, other relatives, and friends.

"Our most deepest sympathy, Love , hugs and prayers to Lloyd and all of their family, Elaine was such a fun person. Never knew a happier couple!! May God Bless You all. Jim & Nancy Jurgens"

"Thoughts and Prayers are with all of you in Elaine's family. A very loving and lovely person to be around. She will missed."

"My thoughts and prayers are with you all. I am so sorry for your loss. "

"Our sympathy goes out to Lloyd and all the family in the loss of such a loved one."