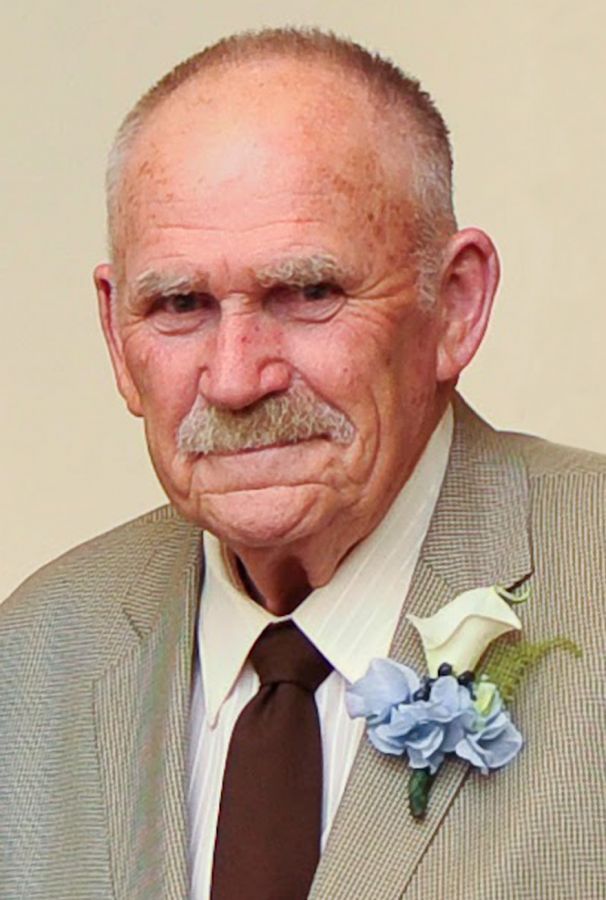 Kenneth William Kock was born June 1, 1937, the son of Leonard and Edna (Koenck) Kock. He grew up on a farm in northern Jackson Township and attended country school there and eventually Westside High School, graduating with the class of 1955.

That summer, he decided to follow in the footsteps of his close friend Lowell Rickers, who had been drafted, and enlisted in the military, leaving for Omaha after helping with that fall's harvest. His friend Lowell was sent to the Army, and Kenny was placed in the U.S. Navy. His experiences took him to Camp Coronado Naval Base in Southern California and then to the seas of the Philippines and Japan on the LST1122 for 21 months.

In 1957, Kenny headed back home to regain his Iowa farming passion and also connect with his fiancé' Joyce Aylward. They were married at the United Presbyterian Church in Vail on September 14, 1957. They were the parents of two sons, Davey and Danny.

The couple farmed in Jackson Township, and he later entered the cob hauling business. In 1970 he began a new career as a rural mail carrier for the United States Postal Service, a job which he performed for the next 32 years, first as a substitute and then from1984 until October 2001 as the official full-time carrier. In December of 2000, he received a Safe Drivers' Award plaque from the National Safety Council's Million Mile Club in recognition of a million miles of accident-free driving over 30 years.

Kenny owned the Westside Gun Club with Denny Dozark and, after the club was moved to the Dozark farm always enjoyed helping out and shooting on Wednesday nights. Helping to host the annual "Bell Shoot" on the Bell Reunion weekend was a highlight.

Kenny and Joyce spent time during the winters in the Hill Country of Texas for many years and became close friends with a group of campers with which they also spent many weekends at various campgrounds around Iowa in the warm weather months.

Over the years, Kenny enjoyed cheering on the Nebraska Cornhuskers and the Kansas City Chiefs, participating in tractor pulls, watching war movies and westerns, and attending morning coffee in Boyer and paying visits to Hawley Insurance. He also loved "tootling around," reloading bullets, riding the ATV, and making contraptions on the farm. However, his biggest loves were his kids, grandkids and great-grandkids, and he was proud of each and every one.

Kenny was an active member of the Vail Masonic Lodge, the United Church Westside, and the Westside American Legion, from which he proudly received a Quilt of Valor in January, 2021.

Kenny was diagnosed with multiple myeloma in the fall of 2010 and worked to live life to its fullest despite battling that illness.

Kenny was preceded in death by his parents, his sister Lorna (Berg) Kollatschney in 2005, and his son, Davey, in 2012.

He is survived by his wife of 64 years, Joyce; his son Dan of Westside and his children: Jocelyn and her husband Garrett Shaal of Omaha; Danielle of Madison, Wis.; and Alex of Ames; his daughter-in-law Janine of Westside and her family: Kellsey and her husband Wade and daughter Isabella of West Des Moines, Kendra and her husband Trent and sons Samuel and Benjamin of Bennington, Neb.; and Jared and his wife Kenzie and their daughter Davie Ann of Arcadia; a brother Ron Kock and his wife Julie of Carroll; a sister-in-law, Jeanne Hawley of Vail; a brother-in-law Paul Aylward and his wife Mary of Huron, S.D., as well as many nieces and nephews and other extended relatives as well as a host of friends.

"Many words of sympathy sent to all the kock family...joyce and Gordon weller"

"Joyce and family. Sorry to hear of your loss. Have thought about you over the years and always enjoyed our time at WESCO God Bless"

"Sending my sympathies to the Kock family. (Kent and) I enjoyed visiting with Kenny and Joyce a few times, camping. May he rest in peace. "

"My sincere sympathy to Joyce, Dan and the entire family. Kenny always took time out on his mail route to say hello and ask how everyone was getting along. A true gentleman. "

"I am so sorry to hear of Kenny's passing, but I know there is such jubilation where he is now!! I have so many wonderful memories of him that I have treasured my whole life. "Moose" sure loves you Kenny!! Say hello to mom and dad for me. "

"Joyce, Dan and family we are so sorry to hear the news. Kenny was a great friend and employee always with a smile on his face. God bless him and all of you. "