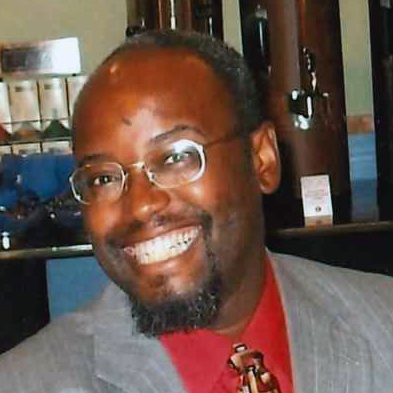 Elder Farrell Glen McMackins was born on April 17, 1970 in Pierce County Tacoma Washington to Charles and Evanell McMackins, he was the eldest of two children. Years later his mother Evanell McMackins relocated to San Diego where he attended Knox and Lindberg Elementary schools and Lewis Junior High School.

Farrell McMackins took hold of God unchanging hands at the age of 17 while attending Greater Israelite Church of God under the leadership of the late Pastor Harvey Jessie. Farrell loved going to church and he loved God; he loved telling others about Jesus. He was taught by Pastor Harvey Jessie regardless what others do holiness is right and he lived it; and stayed with God and the church. Farrell was appointed the president of the Deaf ministry in 1992. He received his Minister license in 2008. He loved teaching Sunday school to the youth.

Farrell graduated from Abraham Lincoln High School, class of 1989. While attending Mesa college he met his beautiful wife Cammy in the summer 1990 as he walked across the street and saw her sitting at a bus stop reading her bible. It was an instant connection; it was love at first sight. They were married in 1992; to this union three children were born Jekia, Josiah and Jeremiah.

Farrell was a hard worker and worked at numerous jobs; in 1995 he enlisted in the United States Navy and served for 9 years; in September 2011 he served in the Navy Reserves for 3 years.

Farrell was a family man and enjoyed spending time with his family. He enjoyed taking his family fishing, going out eating at restaurants, playing games with his children and going to the movies and he also enjoyed watching movies at home. He loved having special time with his wife Cammy. He always said "I really love me some Cammy," my beautiful wife. Farrell had a beautiful smile that lit up the room. He had a loving and giving heart.

On a special assignment using the gift that God had blessed him and his wife with American Sign Language, Farrell and Cammy attended Nation of Priests for 2 years. In 2013 they moved their membership to New Beginning Cathedral GOCIC under the leadership of the late Bishop Johnny L. McCaleb; who appointed him to work in the van ministry, later he was appointed as Assistant Superintendent of the Sunday School Department. The Lord blessed him to become an Elder in 2016 and he served as a faithful servant of God. In November 2019 the Lord blessed him to purchase a beautiful home in Perris CA for his family. His desire was to make his wife happy and to give her the desires of her heart. He was an awesome man of God, a husband, father, grandfather and he adored his grandson Keyelinn and was a great provider. He was given the nickname "King Farrell"