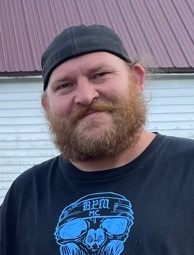 PETERSON, MN - David Lee "Tex" Keenan, 46, of Peterson, MN passed away peacefully with his wife and mom by his side on Monday, August 9, 2021, at Gundersen Health System in La Crosse, WI, following injuries that he sustained in a motorcycle accident.
Tex was born on May 23, 1975, in Bedford, TX to James and Deborah (Glazener) Keenan. He was raised in Haltom City, TX. In 1991, he moved to Nevada and then back to Texas in 1994. In 1998 he moved to Peterson, MN. On July 7, 2001, he was united in marriage to Missy Morken, together they had four children. He was currently working for Acuity Brands in Winona, MN. Tex enjoyed hunting, fishing, his children and family, all sports (especially the Dallas Cowboys), playing poker and riding his Harley Davidson.
He is survived by his wife, Missy; mother, Deborah Woodley; children: Ashley, Cael, Kadence, and Brady; three siblings: Janice, Terry, and Jimmy; mother in law, Rose Morken; and by his brothers from the BPM Motorcycle Club.
Tex was preceded in death by his father, father-in-law and grandparents.
There will be a funeral service for Tex at 2:00 p.m. on Tuesday, August 17, 2021, at North Prairie Lutheran Church in rural Lanesboro, MN with the Reverend Sarah Walker Brown officiating. Visitation will be from 3:00 to 7:00 p.m. on Monday, August 16, 2021, at Hoff Funeral and Cremation Service in Rushford and one hour prior to the service on Tuesday at the church. The funeral service will be live-streamed on the facebook page of his wife, Missy Maye Keenan. The Keenan family would like to thank the guardian angel who was with Tex after the accident. She called 911, held his hand, talked with him, and stayed until the ambulance arrived. He was not alone.
Please leave a memory of Tex and sign his online guestbook at www.hofffuneral.com.

"I was very saddened to hear of this. I\'m David\'s cousin, and though we haven\'t had the pleasure of visiting for quite a while, we spent all of our childhood holidays, birthdays, etc together. My heartfelt condolences to his wife and children. Terry, Jimmy, and Janice: I hope you see this as I had no other way to get in touch. I\'m so sorry for your loss. Stay strong. Your cousin, Jon Keenan Jr (Buddy)"

"I first met Texas Dave years ago playing texas holdem. He was the loudest guy in the room and he had no filters. At first I thought WOW who the heck is this loud mouth. Dave said what was on his mind no matter what or where. I liked and respected Dave as he was. A really good card player and a better man. Dave UNFILTERED I will really miss you man. Harry "