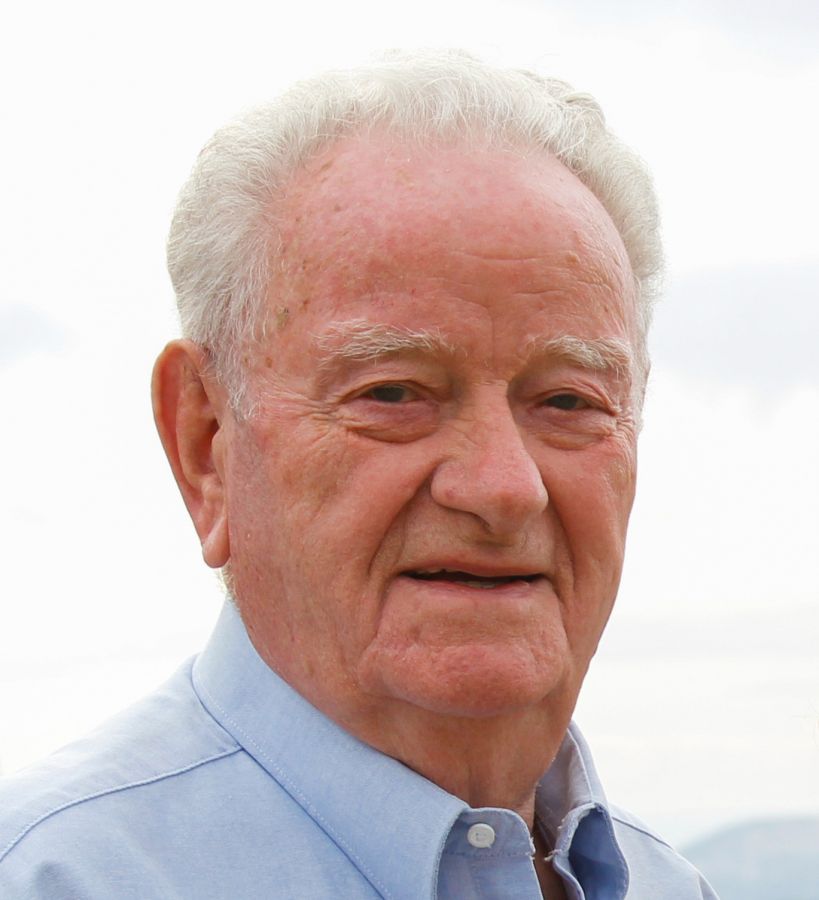 Danny completed his earthly journey, surrounded by family, on the morning of July 13, 2021, in Phoenix, Arizona. Danny fought an extended battle with cancer, never giving in and remaining strong until the end.

Danny was born to John Joseph and Margaret McFeely on May 18, 1926, in a farmhouse located in the townland of Ballyholly, County Derry, Ireland. Danny was the eldest of seven children, with three brothers and three sisters. Danny spent part of his youth in the nearby townland of Ballyarton, living for a time with his Aunt Mary Jane Grant, who was very dear to him.

Danny is survived by the love of his life, Leonia, with whom he spent what Danny would agree were the best 57 years of his life. Danny leaves behind three sons: Daniel, Eugene, and Patrick, and their wives Patricia, Alexandra, and Dana, who loved their father dearly. Danny was blessed with six grandchildren: Dennis, Megan, Maeve, Daniel, Owen, and Ryan, all of whom at one time or another enjoyed his "Irish humor." His family was the one thing of which Danny was most proud and held most dearly.

Danny immigrated to the United States in 1953, settling in Philadelphia, Pennsylvania, where he would later meet his wife Leonia and become a U.S. citizen. Before coming to the United States, Danny managed the family pub, McFeely's Bar, formerly located on the main road between Dungiven and Claudy, just below Ballyholly. In 1956, Danny began a 27-year career with Trans World Airlines, spending the last seven years on assignment for TWA in Jeddah, Saudi Arabia, as the Jeddah-based manager of customer relations for Saudi Arabian Airlines. After retiring from TWA in 1983, Danny returned to his home in Ireland and spent the next seven years raising sheep on the family farm in Ballyarton. Danny spent many long days (and nights) working the land and "looking the sheep," aided by his cousin and good friend Anthony Grant, and his brother Dick. After having enough of the cold and the rain, and one lambing season too many, Danny and Leonia moved to Phoenix, Arizona in 1991. Danny lived in Phoenix for the remainder of his life.

Danny lived a full life of 95+ years, full of love and laughter. Danny joins his parents, his Aunt Mary Jane, as well as his sisters Mary O'Neill and Gertie McCloskey, and his brother Dick, in the loving arms of the Lord. Danny is survived by his sister Patricia Flanagan, and his brothers Henry (Laurie) and John, and their wives Sheila and Marianne.

Danny's family thanks Hospice of the Valley for helping them allow Danny to spend his final days in the manner he wished, and is especially thankful to Millie, Maggie, Alison, and Griselda for the outstanding care and support they provided. In lieu of flowers, the family requests that donations be made to Hospice of the Valley (www.hov.org/donate).

"Sincere sympathy and condolences from the McCloskey family, Cool, Claudy "

"Sincere sympathy and condolences from the McCloskey family, Cool, Claudy "

"I have very fond memories of uncle Dan and his family visits back to Ireland. He always kept in touch with me, keeping me up to date with his family and wanting to know how we were doing. I will miss his calls dearly. Jude always said that Dan could tell him news that he hadn?t even heard yet! We will miss him, Donna and family xx"

"I was so sad to hear of the passing of dear uncle Dan. Dan always made a point of keeping in touch with us all, making sure everyone was keeping well. I will remember Dan as a true family man. That he loved people, and people loved him. I know there would have been a huge welcome party waiting on him as he entered eternal life. Our sincere sympathy to Leonia, Daniel, Eugene, Patrick and all the family. sleep peacefully uncle Dan with love and found memories Deirdre, Kieran and family xx"

"Mrs. McFeely, Patrick, Eugene and Daniel, I am so sorry for you loss. I remember you father fondly from our days on Connell Ave in Yeadon. He will be missed."

"Uncle Danny will be sadly missed, he was a true Irish gentleman. I remember his visits home when we were children and he was always very kind to us. On every occasion that Danny and Leonia came home to visit, mother was their first call & the last call on leaving. One of mother?s favourite stories was that people said, Danny and her were the best looking brother and sister who attended St Patrick?s Church in Claudy, at that time! Uncle Danny always kept in touch with us and was very interested in how everyone was getting on and the situation within the farming community. Breidh and I have very found memories of our trip to Arizona and the kindness we received, not to mention the laughter we all shared. Uncle Danny will be sorely missed by us. Our sincere sympathy to Leonia and all the family. Rest in peace uncle Danny. With much love, Jude Breidh, Aisling & Niamh"

"I will miss my uncle Dan so much. Alough he lived in Phoenix he always kept in close contact, new the news of what was happening in our townland before we did !!. My mother Gertie used to have great conversations with him about Ballyholly and they even managed they even managed the odd argument!!---which was very surprising for the McFeelys--If my mum was here now she would have been heart broken as we all are . Dan was one of life's real gentlemen. Thinking of you all . With sincere sympathy and lots of love. ANN."