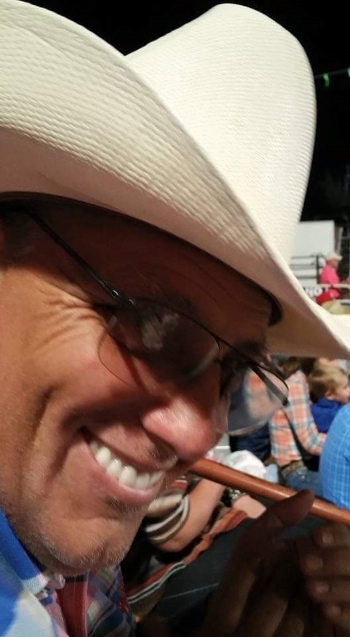 David Larkin Glade, 66, of Beaver Dam, Utah passed away peacefully at his home on June 5, 2021, after a long battle with Alzheimer's. David was born to Richard Larkin and Leilah (Wood) Glade on June 21, 1954. He was raised in Bountiful Utah on the family farm along with his older brother and three sisters. Growing up on the farm taught him many things, including working hard and fixing just about anything. He graduated from Viewmont High School where he participated in VICA, drama, and auto shop to name a few.
After high school, David attended Salt Lake Community College where he met his sweetheart Liz Pierce at a Halloween dance. One year later they were married for time and all eternity in the Salt Lake City Utah temple on October 18, 1973. Through this union, they were blessed with two children, David (Shaela) Glade, and Emily (Scott) Searle.
David was a member of the Utah State Western Riding Club Association and served in the club, and district, leadership positions. He enjoyed the bonding and friendships he made with his fellow horse lovers.
David also had a love of the water. He became a SCUBA instructor and enjoyed traveling to places where he could explore the underwater world.
David has a love of his Savior and enjoyed the many callings he had in the Church of Jesus Christ of Latter-day Saints. The calling that he loved the most is his time serving as a temple worker in the Logan and Brigham City temples.
He is survived by his love and wife, Liz, two children, David and Emily, 14 grandchildren, his brother, Richard Glade, and three sisters, Suzina Glade, Shela (Earl) Price MarryAnn (John) Parker. He was proceeded in death by his parents Larkin and Leilah.
A viewing will be held Friday, June 11, 2021, at the Beaver Dam Utah LDS church from 5:30 - 7:30 pm (16025 N Beaver Dam Rd, Collinston, UT 84306).
A graveside service will be held at the Preston Cemetery on Saturday, June 12, 2021, at 10:00 am (1451 N 800 E, Preston, ID 83263).
The family would like to express heartfelt thanks to Brittny, Julie, Courtney, the many hospice workers, and the staff at the Malad Hospital who helped them and David.
Funeral arrangments are under the direction of Franklin County Funeral Home 56 S State St, Preston, Idaho 83263. Please share a favorite memory of David or offer condolences to the family by leaving a tribute on this page.