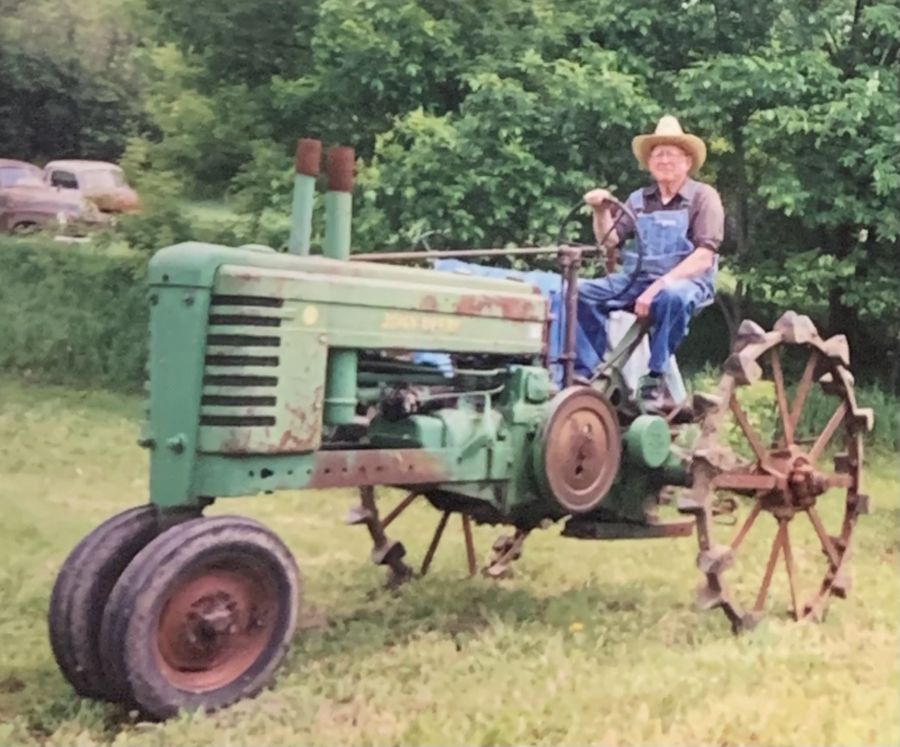 Howard "Red" Clark, 91, passed away on Sunday, May 2, 2021 at the St. Luke's Regional Medical Center in Sioux City, IA. Funeral service will be held at 11:00 a.m. on Thursday, May 6, 2021 at the Loess Hills Funeral Home in Glenwood. Burial with military honors will be at the West Liberty Cemetery north of Glenwood. Visitation will be held prior to the funeral beginning at 9:00 a.m. on Thursday at the funeral home. Loess Hills Funeral Home in Glenwood is caring for Red and his family.

Howard "Red" "Bub" Clark, 91, passed away on Sunday, May 2, 2021 at the St. Luke's Regional Medical Center in Sioux City, IA.
Howard Bertram Clark son of Bertram Vernon and Florence Bernice (McVey) Clark was born on December 16, 1929 in Council Bluffs, IA. He served in the United States Army from March 1947 - October 1948. Howard was nicknamed "Pinky" by the Army cook because he liked pancakes.
On March 18, 1949, Howard was united in marriage to Marilyn E. Clark in Council Bluffs, Iowa. Seven children were born to this union, Howard, Rick, Pamela, Leonard, Bonnie, Russell and Douglas.
The couple purchased a farm north of Glenwood and it was there that they raised their family.
Marilyn passed away on August 31, 1998. Howard then married Mary Fisher Clemens on May 6th 1999.
Mary passed away on May 19, 2019.
Howard worked as a machinist for the Union Pacific Railroad for approximately 40 years.
Howard enjoyed coon hunting with his blue tick and black and tan hounds, raising a big garden, and most of all he loved restoring and tinkering with his old John Deere tractors. He had a knack for fixing and repairing about anything.
He also loved his Country music, with Ernest Tubb, Hank Williams, Johnny Cash and Loretta Lynn being some of his favorites. When visiting Dad you could find him in his bedroom playing his guitar and singing which he was quite good at. He also loved the jam sessions with his sisters and friends who all played the guitar and sang.
The smile on Dad's face the first time he ever rode in a combine with his son-in-law David at the age of 89 was priceless.
Howard is preceded in death by his first wife Marilyn and second wife, Mary; sons Rick Clark and Leonard Clark; grandson, Joshua Heller; sisters, Doris Sales and Bonnie Hansen; brother, Jerry Clark.
Howard is survived by his children, Howard and Jackie Clark of Hastings, IA, Pam Barns of Glenwood, IA, Bonnie and David Heller of Irwin, IA, Russell Clark of Shenandoah, IA, Doug and LuCinda Clark of Oakland, IA; 9 grandchildren and 7 great- grandchildren; sisters, Phyllis Cushman and Sylvia Snipes and husband Glen both of Council Bluffs, IA; other relatives and a host of friends.

"Have known Red most of my Life. Lived on the farm on top the hill above Red and Family. Son Howard, former Sheriff, is very good Friend of Family, as is His Siblings. Our Hearts and Prayers are with the entire Clark Family. God Bless. Dan Sandy Benscoter Det. Lakes, Minnesota "

"Our Hearts and Prayers are with the entire Clark Family. "

"Condolences to the Clark family at this most difficult time. May God?s blessings help heal your hearts. "

"I have so many fond memories of Uncle Bub. I will always cherish those memories. He had a special nickname for all of the kids. He could come up with one liners lickety split. And they were funny! Remember playing up in the fields, using the trailer house up there for our house. Used the old cars up there to go anyplace our hearts desired, but our young minds back then only took us to the grocery store or the gas station. Oh so many things I could tell about those days at the farm. Prayers of comfort for the family "

"Uncle Bub was always fun to be around. He had a nickname for every one of his kids. He could come up with one-liners lickety split. I remember so many days growing up out at the farm. We'd go up into the fields to play house in the old trailer and pretend to go anywhere our hearts desired in the old cars up there. But in those days our young minds never took us any further than the grocery store or gas station. The fond memories of Uncle Bub will always be held close to my heart. Prayers of comfort being said for the family. I love you all!"