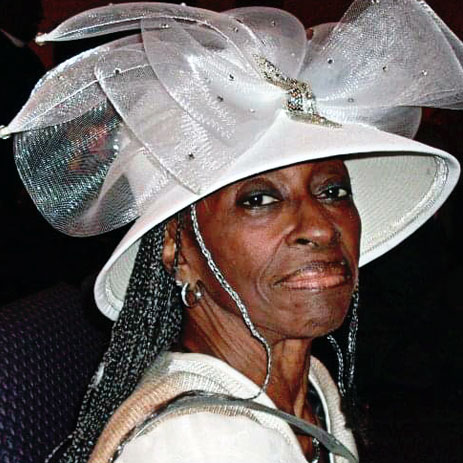 Carrie Marie Atkinson was born April 8, 1940 to Ernie Lee Elston of Oklahoma and Anna Lee Anderson, of Taylor, Texas. To this union Carrie joined her eldest sister the late Betty Louise Elston, before the Elston's relocated their daughters to California. Anna completed her family by blessing Betty and Carrie with their brothers, Willie Earl Jones, James Clifford Jones, their baby sister the Late Willa Ann Brown, and her baby brother Nathan Wardell Benjamin. Carrie (who was raised by a God-fearing woman) accepted Christ at a noticeably young age.

Carrie attended Memorial Junior High School and San Diego High School in San Diego, California, where she was affectionately nick named "Reesie". In this season is when young Carrie met and later married Lenwood Alfred Williams. To this union is where Carrie became a mother to Lanita Annette and Larry Alfred Williams. Like her mother, Carrie's passion for caring for the elderly led her to vocational nursing school and worked in various nursing facilities within San Diego County.

As Carrie found her purpose in the nursing field, Carrie also started a new chapter in her life when she met and married Nathaniel Morgan, and to this union Kelly Nathaniel and Kerry Neville Morgan came to be. Through out her motherhood she worked extremely hard to provide for her children, it was during this season that she began her fellowship at St Stephens COGIC under the late Bishop George McKinney.

When Carrie was not working one of her three jobs, she enjoyed cooking, and teaching her children how to cook, and enjoyed fishing and attending her young sons sporting events. Carrie also had a collector's dream for collecting rare statutes, paintings, and artwork. And not to mention, an eccentric taste for keeping herself and her children looking impeccable from head to toe.

January 19, 1979 Carrie married her loving husband of 42 years Neville Ainsworth Atkinson of Kingston Jamaica, and opened her own nursing registry in Coronado, California. Carrie Cares, which thrived for over 37 years serving the elderly population within San Diego County. The referrals steadily increased, and Carrie created a reputable name, and rapport with many of her clients, and physicians within the island of Coronado. With a successful business Carrie and Neville enjoyed traveling to their favorite hot spots in Mexico.

The Atkinsons loved their children, and they also loved their many fur babies, but most of all Carrie Loved the Lord, her children, and her grandchildren, her siblings, and their families, her patients, and anyone she felt was in need of a helping hand. Carrie loved to watch her family and friends enjoy her cooking. At any given time on any given day, you could show up at her home, and guaranteed Carrie had a container of mustard and turnip greens, or cabbage with a pan of honey butter cornbread made from scratch.

In 2008, Carrie and her husband Neville relocated to the Inland Empire. It was there that Carrie began collecting her latest collector items, Roosters...no matter the size or the color, mom decked her kitchen out with every color rooster imaginable. To know Carrie, you know she was over the top with everything she touched. The relationships she has built with each of us has made us feel over the top. Carrie was a warm elegant fun-loving spirit, she connected people with people, an influencer, innovator, who helped give back without thought. Carrie's profound light still shines through all of us today. Her pure love will light our way in our darkest hours, and her memory will infinitely be with us.