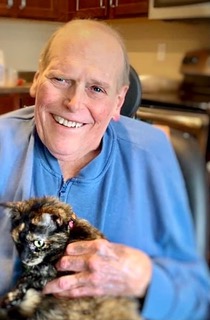 He was a 1965 graduate of the Detroit Institute of Technology. Roger worked for WLUCTV6 as a very successful account executive for over 20 years. He also worked as a district manager for Heileman Brewing Company and was the owner of Turner Standard Service.

Roger was a member of the Marquette Exchange Club and past president. He also coached several youth baseball and hockey teams over the years. Roger thoroughly enjoyed time at his camp near Silver Lake Basin and was known for his fabulous meals (especially apple pies) during hunting season. In his retirement years, Roger was an avid coin collector and karaoke enthusiast.

Roger is survived by his children, Carrie Marie (Jeffrey) Scheidt of Fairfax, VA, Scott Robert (Teresa) Turner of Wausau, WI and Janna Marie Turner of Green Bay, WI; four grandchildren, Tori and James Scheidt and Taylor and Sydney Turner; and mother of his children, Beverly Wright Lang. Roger was preceded in death by his parents.

Visitation for family and friends will be held on Friday, April 16, 2021 at Canale-Tonella Funeral Home and Cremation Services from 10 a.m. until 11 a.m. A memorial service will be held in the funeral home at 11 a.m. with Rev. Greg Heikkala officiating. Burial will take place in the Holy Cross Cemetery.

In lieu of flowers, memorials may be made in Roger's name to Pigs N Heat Treasure in care of the Marquette City Police, 300 W. Baraga Ave., Marquette, MI 49855.

Canale-Tonella Funeral Home and Cremation Services is assisting Roger's family where memories and condolences may be shared at canalefuneral.com

"Entire Turner family, our deepest sympathy on the passing of Roger. May he rest in peace. Scott and Carol Bjork"

"We became Roger\'s next door neighbors just a few months ago. Covid restrictions meant that we could not see much of each other, but he still managed to welcome us to the neighborhood and I loved hearing his karaoke when I took the dog out for my evening walk. My condolences to the family. Ann & Bill Fisher "

"Turner Family, our deepest sympathy on the loss of your Dad. Sincerely, Bill and Joan Dupras"

"Turner Family, our deepest sympathy on the loss of your Dad. Sincerely, Bill and Joan Dupras"