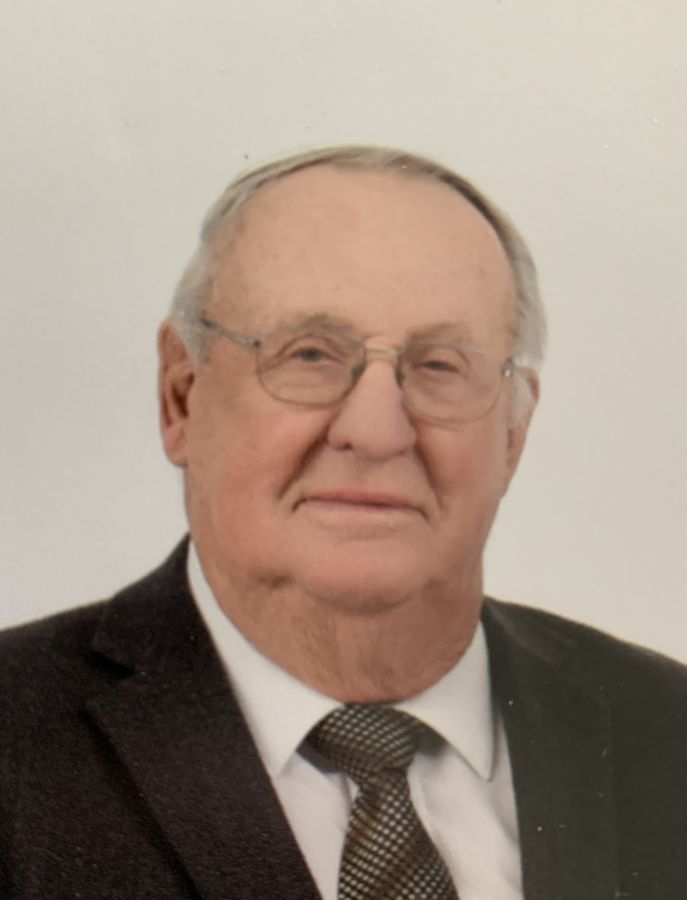 Ernest Allen Van Weelden passed away peacefully at his home on the family farm on March 31, 2021 at the age of 92.

Ernie was born on September 20, 1928 to William and Jennie Bouma Van Weelden at the rural Oskaloosa home of his parents, the ninth of fourteen children. He attended school in the Oskaloosa area and grew up helping his father on the family farm. As a boy, Ernie milked cows, plowed fields with a team of horses and later drove his father's tractor and one-row corn picker. Following his education, Ernie began working in the grocery business for Thriftway Grocery Stores.

In 1952, Ernie served his country in Korea as an MP in the Army, stationed near the 38th Parallel. Following his service, Ernie returned to work as a manager for Thriftway Grocery Stores in the Des Moines area.

In 1954, Ernie met Mary Ann Nordman of Wesley, Iowa on a blind date. They were married November 11, 1955 at the Woden Christian Reformed Church and settled in Des Moines. In 1957, Ernie and Mary returned to the family farm near Wesley, where they successfully farmed until their retirement in 1994. They raised three children, including David Jon, a special needs child who touched the lives of all he met until his death at age twenty.

Ernie professed his faith at an early age and was very active in his church for all his life. Ernie enjoyed golf, a good game of cards, and fishing - especially at his cabin in Canada with family and friends. Ernie remained close to all his brothers and sisters throughout the years. For nearly twenty years, Ernie and Mary Ann wintered in Arizona, with frequent trips to Omaha and Burleson to check on the grandchildren. Above all, Ernie was devoted to God, his wife and his family, especially his grandchildren. Ernie always took care of his family.

"Sherri and family sorry to hear of your loss. "

"You are all in our thoughts and prayers during this time. Mark & Carol Limberg"

"On behalf of Uncle Jim who is in Hospice and the rest of our family in Canada we offer our condolences and prayers. Uncle Jim has so many fond memories of trips to Ernie\'s cabin, fishing and playing cards with the family. Joel&Yvette Van Weelden, Ontario Canada."

"My parents, Doris and Leonard, had the very best neighbors in Ernie and Mary Ann. I remember many kind words and much laughter when Ernie stopped by for morning coffee. All our sympathy to Mary Ann, Mark, Sherri, and the family. You are in our thoughts. "

"I have so many fond memories of visiting with Ernie and MaryAnn when David lived at Shepherds Cottage. We shared lots of laughs and also some tears. What a nice couple. My sympathy to Ernie?s family. Sending thoughts and prayers. "