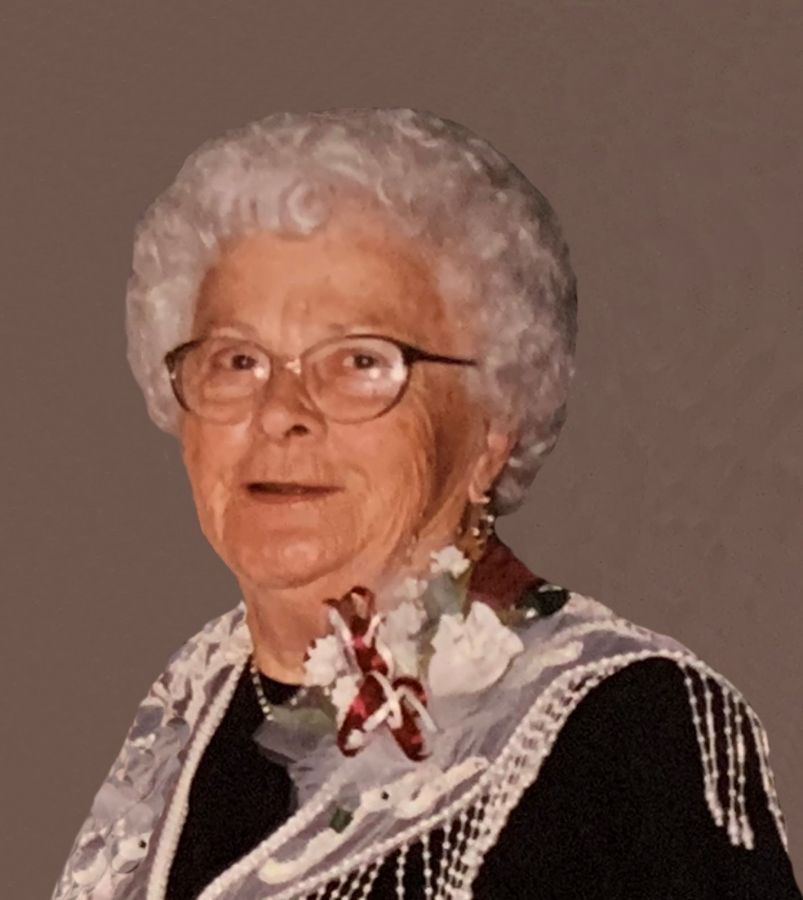 Cleda B. Palmer, 96, of Council Bluffs and former Carson resident, passed away on Thursday, March 25, 2021 at Fox Run Assisted Living. Memorial Service will be 11:00 a.m. on Tuesday, March 30, 2021 at the Loess Hills Funeral Home in Carson with Rev. Terry McClain officiating. Visitation with the family present will be held two hours prior to the memorial service beginning at 9:00 a.m. Burial will be in the Carson Cemetery. Loess Hills Funeral Home in Carson is caring for Cleda and her family.

Memorials: The family will direct the memorials

Cleda Blanche (Combs) Miller Palmer was born February 25, 1925 to Wilma Audey "Tim" and Blanche Adlina (Sego) Combs in Denver, MO. Cleda was one of 9 children, having 6 older brothers and 2 younger sisters. She attended school at Hatfield, MO and Bethany, MO.
Cleda married Jack Miller of Hatfield, MO in 1941. While Jack served in the Navy, she lived with her in-laws, Alva and Clella Miller. Jack and Cleda made their home in Hatfield, MO after Jack's service in Navy. To this union they were blessed with daughter Evelyn Jo in March 1946 and Jack Lynn in November 1948.
Cleda and Jack moved to Carson, IA from Hatfield, MO in 1947. Jack worked for the county over 30 years. After a few years, Cleda worked at Carson-Macedonia School and Iowa School for the Deaf. Jack passed away in March 1984 at the age of 61.
Her grandchildren were her whole life. Evelyn was blessed with Daniel Ray in 1970 and DeAnna Reason LeKander 1974. Jack Jr was blessed with Staci Strong in 1970 and Shawn Miller in 1975.
After the death of her husband Jack, she dated longtime friend Delbert Palmer. They were married in Las Vegas, Nevada on October 26, 1985. They enjoyed traveling and camping in many places.
Both the Millers and Palmers were devoted members to Carson Methodist Church as were their children. They joined Wheeler Grove.
Cleda loved to quilt and garden. We have all been left with beautiful hand quilted quilts she made which included the date she made them.
The Palmers enjoyed becoming grandparents with 5 adopted babies and 4 grandchildren.
Cleda passed away at the age of 96 on March 25, 2021 at Fox Run Assisted Living in Council Bluffs, IA.
Cleda is survived by her children, Evelyn (Ray) Blanchard and Jack (Phyllis) Miller; grandchildren, Staci (Barry) Strong and Shawn (Kristen) Miller; grandson-in-law Brett LeKander; and 5 great grandchildren, Keegan, Lily, Logan, Kena, and Jaxton.
Cleda was preceded in 1984 death by husband Jack Miller; grandchildren, Daniel Reason 1988, DeAnna (Reason) LeKander 2015; her parents; in-laws; 6 brothers and 2 sisters; and 2nd late husband Delbert Palmer in 2015.

"I am so sorry to hear of your loss. We lived next door to Cleda and Jack in the late 1970\'s for a couple of years. Cleda was always so pleasant to us and I have thought of her throughout the years. May she rest in heavenly peace."

"Cleda became our Great Aunt when she married Great Uncle Delbert Palmer. What a kind and loving addition to the family! It was always a good time visiting with them. They were fun to be around. She spoke often with love of her children and grandchildren. She will be greatly missed by many. Debbie & Briant Redmond"

"Cleda became our Great Aunt when she married Great Uncle Delbert Palmer. What a kind and loving addition to the family! It was always a good time visiting with them. They were fun to be around. She spoke often with love of her children and grandchildren. She will be greatly missed by many. Debbie & Briant Redmond"

"Growing up, Cleda was my second Mom. I?d get up in the morning and hike across the street to hang out with Cleda, Ev, and Jackie. Cleda was a dear, sweet lady who taught me how to snap beans, shell peas, and I loved spending time with her. Her cinnamon rolls were the best! My prayer for Cleda?s family is that God will help you find comfort in the precious memories that time can never erase."

"Jack and Evelyn, So sorry to see your mother passed away. She was such a nice lady. I will never forget all the Sunday nights she and my mom were on the phone planning the school menus.? Let all those wonderful memories with your mom help you through this difficult time. Rest in peace, Cleda.?"

"Cleda and and her family lived across the street when I was growing up All wonderful people. I have such fond memories. They always had a big garden, and my mother would go over and they would sit inside the garage and snap beans and shell peas. She would always bring things over. A very loving and caring lady, as was her entire family. I always tried to make a point of visiting her when I came home to visit my parents. She always had time for me, and I cherish them. My heart feels so emptied it seems. I will love you always \"Cleddie\". Perhaps you and my Mother are together again, where there is no pain, no sorrow, and endless peace. Maybe even shelling peas together. "