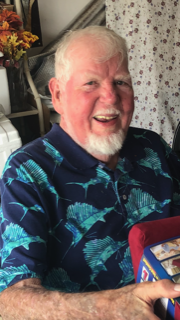 Donald Oscar Melvin, 84, of Summerfeild, Florida, passed away on March 12, 2021, after his battle with cancer.

Donald graduated from West Frankfort High School, served in the army and was a Korean War veteran. Following his military service, Donald worked for thirty-two years at American Airlines. After retiring in 1983, he and Bonnie relocated to Florida, where he spent his days enjoying fishing and family.

Due to COVID-19, a memorial service will be held at a later date.

"Don was one of my first supervisors at American Airlines. He was great to work for and was always willing to give a guy a break. Whenever I was running late for work due to the CTA train being delayed, Don would sign me in. I'd try to explain and he'd say "Save it, Brennan." I learned to start leaving earlier. He was the kind of boss you didn't want to let down."

"Don was a wonderful man. He worked hard for his family and you could set your clock by the VW Bug leaving for his trek to O?Hare every day. He would ride with Greg and Ken and I on our 10 Speed bikes for miles, before biking was popular, and we would fish at various spots. I will miss him and look forward to the day when we are all together again in the great place he rests now. "