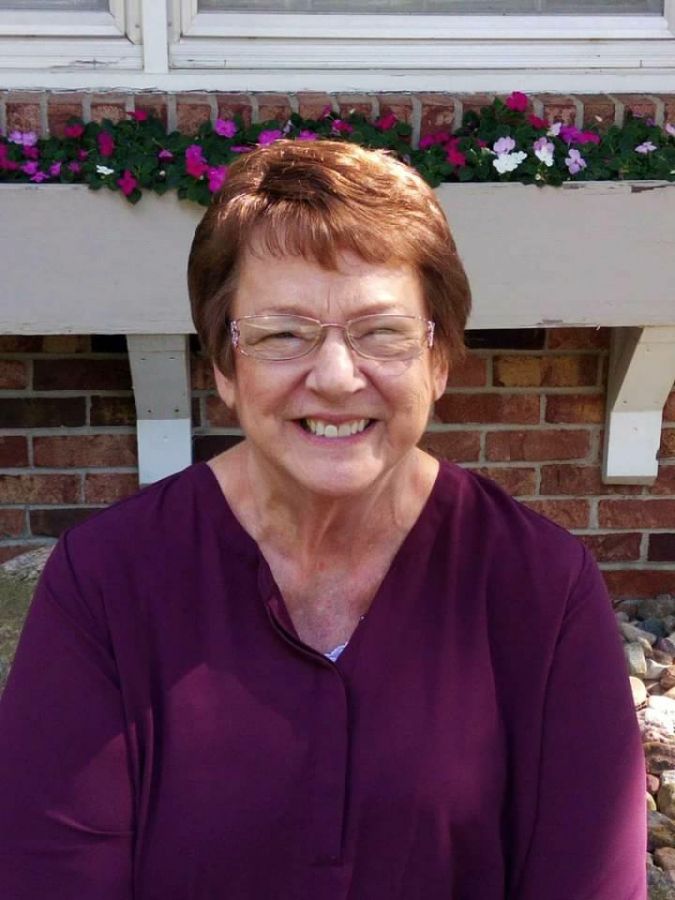 Pamela Hostetter-Oldaker, 76, of Glenwood, IA passed away on Friday, February 12, 2021 at the Taylor Hospice House in Des Moines, IA. Funeral services will be held at 1:00 p.m. on Saturday, February 20, 2021 at the First Congregational Church U.C.C. in Glenwood with Pastor Susan Reed officiating. Burial will be in the Glenwood Cemetery. Visitation will be held from 5:00 p.m. - 7:00 p.m. on Friday, February 19, 2021 at the Loess Hills Funeral Home in Glenwood.
Memorials may be given to First Congregational Church U.C.C. in Glenwood, Iowa.
Pam came into the world on September 28, 1944. Her loving parents, Homer and Virginia (May) Fritz, and her sister, Judy, welcomed her in their small house on Hazel Street in Glenwood, Iowa. Pam lived the entirety of her life in the Glenwood area. She loved her hometown and the people of her community. The Fritz family moved to a larger home on Hazel Street for a several years, before finally settling in their 'forever home' at 308 North Myrtle Street. This beloved house was the gathering place of extended family and friends for many years, and where Pam did the majority of her growing up. It was a home filled with life, love and laughter.
As a child, Pam could be quite precocious and adventurous. She was outgoing, friendly and liked to have fun! Her life-long friends have many humorous stories of Pam's escapades. At the age of 12, Pam fell ill with rheumatic fever. She was bed-ridden for a year, and had to use a wheelchair until she was strong enough to walk again, without putting strain on her heart. From a young age, Pam displayed great courage, strength and perseverance. She would call on these traits many times throughout her life when faced with health issues, challenges and loss.
When Pam was in high school, she was smitten with a handsome, young man from Pacific Junction, Iowa named Larry Hostetter. He used to frequent the A&W restaurant in Glenwood where Pam was a car hop waitress. Larry liked the root beer floats, but he liked Pam even more.
Pam graduated from Glenwood High School in 1962. She and Larry married on December 1, 1963. Pam worked as a typist at Offutt Air Force Base in Bellevue, Nebraska, then was a stay-at-home parent for many years. Pam and Larry welcomed their first child, Scott Douglas, in 1964, and their daughter, Kelly Dawn, in 1968. The family grew unexpectedly in 1975 when twins, Sean Christian and Nicole (Niki) DeLyn, were born. Pam and Larry raised their family in a home they built in the country south of Glenwood. Pam took great pride in her home and children. She was a nurturing, patient, supportive and fun-loving mom.
Pam absolutely loved children and was a natural caregiver. She had her own home-based daycare business for several years. She also worked as an assistant at an ophthalmologist office in Council Bluffs, where she enjoyed interacting with her geriatric patients. Pam later spent many years working as a Family Resource Educator for Head Start in southwest Iowa. She was passionate about helping children and families in need. She retired from work in 2013.
In October of 1995, Larry suddenly passed away at the age of 53. This was a tragic and defining event for Pam and her family. With courage and fortitude, she pressed on and moved forward in positivity. A few years later, Pam met George Oldaker, while she was facilitating a grief support group. Pam was impressed with George's kind heart, love of life, and sense of humor. They began dating, and later married on September 23, 1999. George passed away in August, 2004. They didn't get to spend as many years together as they had hoped, but the time they had was filled with love.
Pam was a lifelong member of First Congregational, United Church of Christ in Glenwood. She spent many years teaching Sunday School and leading the children's choir. She had a beautiful alto singing voice and often sang with the church choir. She was a member of Beta Sigma Phi sorority in Glenwood for several years, and made many friends through that organization. Pam and Larry were both involved with Mills Masquers' community theater productions, both performing on stage and working behind the scenes.
Pam's primary interest in life was her family. She was a steadfast matriarch and was absolutely devoted to her children and grandchildren. She is survived by her four children, their spouses, eight grandchildren, and one great-grandchild: Scott Hostetter and Angela Crute of Glenwood, IA, and their sons, Jordan Hostetter of Kittery, ME and Milan Cannamela of Council Bluffs, IA , and Jordan's son, Errol Carr; Kelly Hostetter and Hugh Thomas of Thornton, CO, and their son, Eric Thomas; Sean and Sarah Hostetter of Des Moines, IA, and their children, Sophia, Sayla, Sage, and Simone Hostetter; and Niki and Bart Hutton of Brooklyn, NY, and their son, Sam Hutton. Pam is also survived by her cousins, who were like brothers to her, Doug (Karen) Roll of Pacific Junction, IA, and Rick (Liz) Roll of Belin, NM, and their families; her aunt, Letty Warner Jones of Kansas City, MO, nieces, nephews, cousins, and a wonderful group of supportive friends.
She was preceded in death by her grandparents, Ralph and Lela May, and Bert and Pearl Fritz; parents, Homer and Virginia Fritz; sister, Judy Smith Cowan; husband, Larry Hostetter; husband, George Oldaker; daughter-in-law, Ronda MacLeod; and her maternal aunt, Vernelle 'Bobbie' Lincoln, who was a very special person in her life.

"Pam was in the class a year behind, and her sister, Judy a year older. They were both such fun gals. They got that crazy spirit from their mom and Aunt Bobbie. I will especially miss her in Glenwood at our annual Homecoming ... So sorry for your loss and mine. Sue and Don Boyce"

"So sorry to hear of Pam?s passing. I worked with her in the HeadStart Preschool Program. She was always kind-hearted and was fun to be around. We had some good times together. Marci Bishop"

"So sorry to hear about Pam. I graduated with Judy and I knew Pam also. I gottoknowherwhen my mom had_eye surgery. she was very nice and funny and I was glad I got to know her better. My deepest sympathy to all her family. Janet Leaders. "

"Prayers for the Hostetter-Oldaker Family. With Fond Memories, Eldon Prax"

"I am saddened to hear of Pam\'s passing but always remember all the joyous times our class had with her over the years. I first got to know Pam in Kindergarden at the West School in Glenwood and recall her joyous personality and energy. Everyone liked Pam and that never changed even after we all graduated from High School. It was fun growing up with her and seemed like she always had some good, fun loving ideas. I enjoyed sitting next to her at dinner at our 50th high school reunion in Glenwood and could see the joy she had with her family. She was also always a big supporter of Glenwood and the area. We will all miss her very much. John Connor Woodstock, GA "