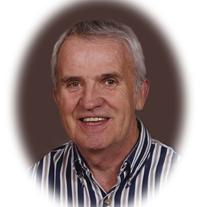 James Leo Pithan was born November 21, 1940, the son of Raymond and Marjorie Shanahan Pithan. He died on Saturday, March 20, 2010, at the Maple Heights Nursing Home in Mapleton, Iowa, at the age of sixty-nine.
Jim was born in Ute, Iowa, and grew up in the Ute area. He received his education in the Ute Community School and graduated from the Ute High School with the class of 1959. After completing his education he worked at Skelly Station in Ute; as a carpenter in Omaha, Nebraska; IBP In Denison; Bickley Motors in Ida Grove; Macs Chevrolet & Pontiac in Mapleton; and Woodmen of the World as a field representative. He served in the National Guard from 1960 until 1966.
On November 30, 1963, Jim was united in marriage to Sharon Evers at St. Boniface Catholic Church in Charter Oak, Iowa. The couple made their home in Ute and were blessed with the birth of three children. He retired in 1988 due to his health and continued to make his home in Ute until entering Maple Heights in 2004.
He was a very loving and caring husband, father, grandfather and great-grandfather. Automobiles were his main passion. He was a great outdoors man who enjoyed hunting and fishing and playing catch with his children and grandchildren. In his leisure time he enjoyed hunting for treasurers. He was a member of St. Marys Catholic Church in Ute.
Jim was preceded in death by his parents and one brother, Bob. Survivors include his wife, Shari of Ute; two sons, Jeff Pithan and his wife, Mona of Ute; Robert Pithan of Sioux City; one daughter, Terri Schelm and her husband, Brian of Hornick; six grandchildren, Megan Luddington and her husband, Greg; Macie Rubida and her husband, Josh; Ryan and Rustie Pithan; Shayna and Cali Schelm; and two great-granddaughters, Abby Luddington and Makenzie Rubida; one sister, Frances Barnett; one brother, Tom Pithan and his wife, Linda, all of Ute; his mother-in-law Marie Evers of Soldier; many other relatives and friends.

"Hi Shari, I just got back to our Texas home from a week visit with our son and his family in Henderson, NV. I was so sorry to hear of Jim's passing. I was reading his obituary and saw that you and Jim were married on Nov. 30, 1963. That is the exact date Chuck and I were married at St. Rose of Lima in Denison. There were many similarities for us. We were neighbors and went to the same country school until we went to Ute to school in the 4th grade. Then I find out we were married that same day. Please know that I will remember you and your family in my prayers. It was good to see you at the celebration in Ute this summer. Loving thoughts and prayers, Chuck and Marilyn Pollak"