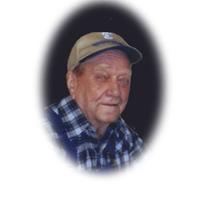 Chris Hansen Jr. was born April 3, 1927, the son of Chris and Verna Stiedly Hansen. He died Tuesday, March 23, 2010, at the Crawford County Memorial Hospital in Denison, Iowa, at the age of eighty-two.
Chris was born in Davenport, Iowa, and moved with his family to Le Claire. He was baptized in Christ as an infant and later confirmed on March 25, 1945, at Zion Lutheran Church in Denison, Iowa. He received his education in the Le Claire Community School. After moving to Denison, he and his brother, David worked for Julius Petersen using workhorses for farming.
On September 11, 1947, Chris was united in marriage to Mary Ann Baber at the Zion Lutheran Church. The couple made their home on a farm near Denison and were blessed with the birth of five children. They later moved to a farm near Manilla and subsequently purchased a farm near Denison. After retiring they made their home in Dow City. In 2007 they purchased a home in Denison to be close to their daughter, Rosemary. After the death of his beloved wife, Mary Ann, he moved to Eventide Senior Housing where he lived for 2 years and then he moved to the Reed House in February, 2010.
He enjoyed farming, gardening, socializing in a game of cards and bowling. He also enjoyed square dancing and ballroom dancing with Mary, traveling, camping and fishing at Nelsons Park and Lake Okoboji.
Chris was preceded in death by his parents; his wife, Mary; two sons, Roger and Michael; two sisters, Mary Anna Peck; and Bonnie Pellim and her husband, David; and two brothers, David and Julius (Babe) Hansen. Survivors include two sons: James and his wife, Sandy of Boone; John "Butch"of Denison; one daughter, Rosemary Hansen of Denison; five grandchildren and eight great-grandchildren; two sisters: Verna Breisford of Apopke, Florida; Virginia Hoefling and her husband, Howard of Marion, Illinois; one brother, Billy Hansen and his wife, Sharon of Nipomo, California; other relatives and friends.