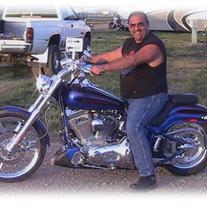 Douglas Krohnke was born June 10, 1951, the son of Edgar and Burnett Schuett Krohnke. He died Wednesday, April 14, 2010, at the Crawford County Memorial Hospital in Denison, Iowa, at the age of fifty-eight.
Douglas was born in Ida Grove, Iowa. He was baptized in Christ and later confirmed on April 11, 1965, at the United Church of Christ in Schleswig, Iowa. He received his education in Schleswig and graduated from Schleswig High School in 1969. He attended Western Iowa Tech for two years with an emphasis in agriculture.
In 1970 he was united in marriage to Nancy Huelsman and they were blessed with the birth of one son. In 1979 he married Carol Marth at the United Church of Christ in Schleswig. The couple made their home near Schleswig where he farmed and raised hogs. They were blessed with the birth of one son.
He was a caring and devoted husband, father and grandfather. He loved spending time with his grandchildren. He had a heart for people, often had a joke to share, and was always there to help them. Outdoor activities he enjoyed included riding his Harley, bow and black powder hunting of deer, turkey and antelope, and fishing. He liked working on crossword puzzles, playing cards, and welding art fabrication. He also bowled for several years. He was a member of the Izaak Walton League and the United Church of Christ in Schleswig.
Douglas was preceded in death by his father, Edgar. Survivors include his wife, Carol of Schleswig; two sons: Sean Krohnke and his wife, Josie; Dylan Krohnke and Linda, all of Schleswig; five grandchildren: Derek, Regan, Sydney, Jenna and Shelby Krohnke; his mother, Burenett Krohnke of Denison; two sisters: Carolyn Lambert and her husband, Paul of Beaufort, South Carolina; and Lois Boyens and her husband, Raymond of Denison; one uncle, Howard Krohnke of Kiron, Iowa; one aunt, Velma Smith of Ida Grove; other relatives and friends.