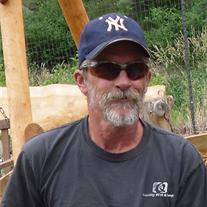 Nicholas Joseph Feller Jr. was born October 31, 1955, the son of Nicholas and Phyllis Pautsch Feller. He died Friday, April 16, 2010, en route to Denison, Iowa, at the age of fifty-four.
Nick was born in Le Mars, Iowa. He was baptized on November 13, 1955 at the St. James Catholic Church in Le Mars, Iowa and confirmed at St. John Lutheran Church in Charter Oak, Iowa on April 4, 1971. He attended Catholic School in Le Mars then transferred to Charter Oak-Ute Schools until his Sophomore year when he joined the Army. He served his country for two years in Europe as a mechanic. After returning to the United States he worked at IBP in Denison and in 1975 he moved to Texas where he worked as a foreman on a cleanup crew. In 1990, he moved to Colorado where he worked on oil rigs and at Quality Well and Pump.
In 1990, Nick was united in marriage to Angela Cantu. Nick was a man who was young at heart who enjoyed family time and was wonderful with his nieces and nephews. He loved snowmobiling, motorcycling, working on cars, the outdoors, his dog "Guerro", and caring for his lawn. He was an extremely hard worker who seemed to never sit still but always had time for a laugh. He always seemed to have a smile on his face and a joke ready to tell. He loved to laugh and to make others laugh as well.
Nick was preceded in death by his parents; one niece, Nicole Feller; one nephew, Mark Feller; his step-father Elmer Bockelmann; and one step-brother Larry Bockelmann. Survivors include his wife, Angela Cantu of La Salle, Colorado; two sons: Thomas Cordova of Tulsa, Oklahoma; and Steven Pulido of Dallas, Texas; two brothers: Mark Feller and his wife, Sue of Denison; and Daniel Feller of Belmond, Iowa; three seisters: Cindy Larson of Defiance; Pam Ehlers and her husband, Robert of Dunlap; and Lisa Arnold of Harlan; one step-brother, Paul Bockelmann and his wife Judy of Charter Oak; and one sister-in-law Maria Cazares of Platteville, Colorado; other relatives and friends.

"Mark, Sue & Boys Sorry to hear of Nicks passing. You have my deepest sympathy. Gods Blessings"

"MY HEART GOES OUT TO THE FAMILY IN THE TRYING TIMES....ANOTHER ANGEL IS NEEDED-GOD BLESS THE FAMILY"

"Please accept my sympathy on Nick's passing. I enjoyed meeting Nick and most of his siblings in these last years. Stay in touch."