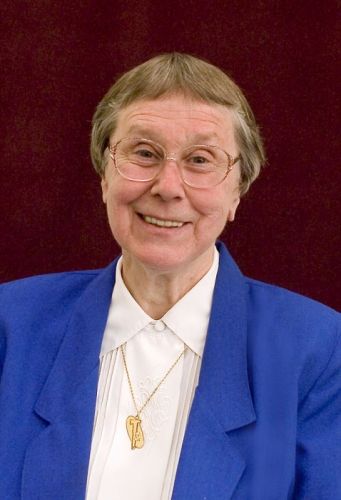 A celebration of life will be held Saturday, July 31, 2021, for Franciscan Sister Mary Blase Kulzer, 89, who passed away October 11, 2020. Mass will take place at St. Francis Convent, Little Falls, at 11 am with a visitation from 9-11 am. Masks are required. Mass will be livestreamed on YouTube.

Irene Mary Kulzer was born at home on the farm in Spring Hill, Minn., on February 11, 1931. Irene was the second of nine children born to the late Roman and Adelinde (Terhaar) Kulzer. Spring Hill was a German settlement and Irene spoke only German until she started school. She retained her German accent all of her life. Irene attended a one-room country school until she was ten. The family moved to Sauk Centre when she was ten and it was there that she met the Benedictine Sisters who taught religion. She attended Sauk Centre High School for two years and then heard about St. Francis High School in Little Falls. She finished high school at St. Francis, graduating as a postulant in 1950. On July 31, 1950, Irene was accepted as a Franciscan Sister of Little Falls and given the name, Sister Mary Blase. She was a Franciscan Sister for 70 years.
Sister Blase was assigned to St. Ottos Care Center where she developed a deep and reverent love for the elderly. She spent seven years at St. Ottos and, during that time, attended geriatric workshops at the University of St. Thomas in St. Paul. In 1959 she was transferred to St. Francis Home in Breckenridge where she spent 25 years, initially as a nursing floor manager, but later, after obtaining her certificate as a Certified Occupational Therapy Assistant, as Activity Director. She was very active in the Occupational Therapy Association. In 1986, Sister Blase moved to Little Falls where she participated in a renewal program, Wholistic Growth Resources. She served as house manager for that program for several years. While at WGR, she learned ceramics and pottery and for many years shared her expertise in those areas. She completed her ministry years at Clothes Review, a ministry for recycling used clothing and household items. During those years, she gathered a faithful group of volunteers who continued to help and befriend her as, in her retirement, she managed the greenhouse and cared for her beloved Mama Kitty as well as volunteering with Morrison County Hospice. Sister Blase especially enjoyed visits from her family, and she was much loved by them as well as by her sisters. She displayed eagerness about life and living it each day to the full.

A memorial Mass will be held at a later date with family and friends. Donations to Franciscan Sisters ministries preferred.

The arrangements for Sr. Mary BlaseKulzer are with Emblom Brenny Funeral Service in Little Falls, MN.

"I will miss having conversations with her about our cats. We both had/have a mama cat. She was very kind to my family and sat with my grandmother when she was moving on to her new journey, until I was able to get off work. I will miss you Sister Blaze."