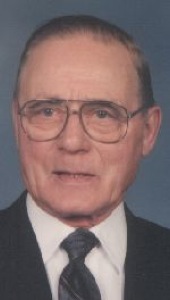 Harold L. Walz, 91 year old resident of Royalton, MN, died Tuesday, September 05, 2006, at the Country Manor in Sartell, MN. Mass of Christian Burial will be held at 11:00 A.M. on Friday, September 8, 2006 at Holy Trinity Catholic Church in Royalton, MN, with Father Laurn Virnig officiating. Interment will be in the parish cemetery. Visitation will be held from 4:00 a" 8:00 P.M. on Thursday, September 7, 2006 at the Emblom-Brenny Funeral Home in Royalton. The Christian Mother's rosary will be at 4:30 P.M. followed by parish prayers at 7:00 P.M. Visitation will continue at the funeral chapel on Friday morning from 8:00 a" 10:30 A.M. Harold Leonard Walz was born on October 16, 1914 in Spring Hill, Minnesota to the late Frank & Elizabeth (Schwegman) Walz. As a child, he moved to Waubun, MN where he grew up and attended school. He worked as a buttermaker for the Royalton Creamery. While living in Royalton, he met Josephine Fussy and the couple was married on November 14, 1939 at Holy Trinity Catholic Church. The couple made their home in Detroit Lakes, MN, where Harold was employed at the Detroit Lakes Creamery. In 1950, the couple moved back to Royalton and purchased Royalton Produce which they owned and operated until 1957. Harold then went to work for Belgrade Superior Feeds in Holdingford from 1957 to 1977 at which time he retired. Harold was involved in the Royalton community serving on the Royalton School Board and the City Council. He was a member of Holy Trinity Catholic Church. Harold enjoyed cars (new and old), dancing, old tyme music and gardening. He especially enjoyed spending time with his children, grandchildren and great-grandchildren. Harold is survived by his wife, Josephine of Royalton; children, Carol (Earl "Butch") Bukowski of Sauk Rapids, Sharon (Don) Evens of Avon and Bob (Kathy) Walz of Plymouth; siblings, Merrill (Rosemary) Walz of Mahnomen, Lillian Winter of Moorhead and Betty (Ed) Schneider of Sauk Centre; sister-in-law, Dorothy Walz of Mahnomen; 7 grandchildren; 8 great-grandchildren. He was preceded in death by his parents; infant son, Jerome and siblings, Lanwald "Lindy" Walz, Ralph Walz and Alvira Ommodt. Casket bearers will be Mike Bukowski, Chris Evens, Gary Evens, Kevin Lahr, Steve Taylor and Ken Walz.

"Memorial:Bob, Kathy and family, I am sorry for your loss and extend my deep sympathy to you and all your family. God Bless all. Thoughts and Prayers, Carol Moxness"

"Memorial:My deepest sympathy. Harold was a gem! Even though I knew him for a short time, I will never forget his sweet nature and his family's kindness."

"Memorial:Josephine, Carol, Sharon, Bob & families - I'm sorry I couldn't make it up for the funeral, but hope you understand. Out thoughts and prayers are with all of you. Mom always talked about when she was a little girl and Harold would come home to visit (he was 17 years older and "out in the world")- how her big brother doted on her, she was "his girl." I know she has always held him in a special place in her heart. Janet"