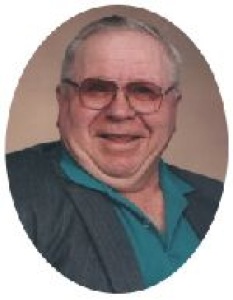 Cyril Justus Wiener was born March 22, 1922 in North Prairie, Morrison County, MN to the late Albert and Magdalene (Jagielski) Wiener. He was one of six sons and three daughters born to Albert and Magdalene. He grew up on the family farm in North Prairie-Two Rivers Township, MN. Cyril attended District 6 Country School for eight years. In 1946, Cyril entered the United States Navy for 22 months serving from January of 1946 through December of 1947. He received an Honorable Discharge in 1947. Cyril returned to the Royalton area and farmed for several years. He was united in marriage to Anna Barbara (Kaiser) Sobania on October 1, 1959, at Holy Trinity Catholic Church in Royalton. The couple resided in several different homes in Royalton. Cyril worked as a welder at Little Falls Machine in Little Falls. While living in Royalton, Cyril was a member of the Royalton American Legion Post #137, Holy Trinity Catholic Church in Royalton, MN and Our Lady of Lourdes Catholic Church in Little Falls, MN. He often volunteered his time with cooking duties at the Legion in Royalton. Cyril enjoyed traveling and reading. He was a devoted husband and caregiver for his wife, Anna, who passed away in 1991. Cyril and Anna were married for 32 years. Cyril was known as "a gentle man with a heart of gold". Due to failing health he moved to Pine Grove Manor in Little Falls. His failing health then led him to move to "Trillium" (Central Minnesota Senior Care Assisted Living) in Brainerd where he resided until his death. He enjoyed living at Trillium. His family wishes to thank all the staff at Pine Grove Manor and at Trillium for all the wonderful care and assistance they gave Cyril throughout the years. Cyril is survived by a brother, Jerome Wiener of Sturgis, MI; sisters, Sister Margarita (Irene) Wiener, OSF of Little Falls, MN, Angeline Wiener Kaiser of St. Cloud, MN and Delores Wiener Thomalla of St. Paul, MN; step-children, Louis Sobania & Edward (Lucy) Sobania, all of Little Falls, MN, John (Delores) Sobania & Elmer (Mary) Sobania, all of Breezy Point, MN, Thomas Sobania of Little Falls, MN, Steve (Clarice) Sobania of Royalton, MN, Joseph Sobania of Sauk Rapids, MN and Regina (Borgheiinck) Kostek of St. Cloud, MN. He will also be remembered by Mary Lee (Len) Schmitz of Cold Spring, MN and a brother-in-law, Joseph (Martha) Kaiser of Long Prairie, MN; 17 grandchildren and several great-grandchildren and many nieces & nephews. He was preceded in death by his wife, Anna; brothers, Al, Ralph, Bernard and Herman Wiener.