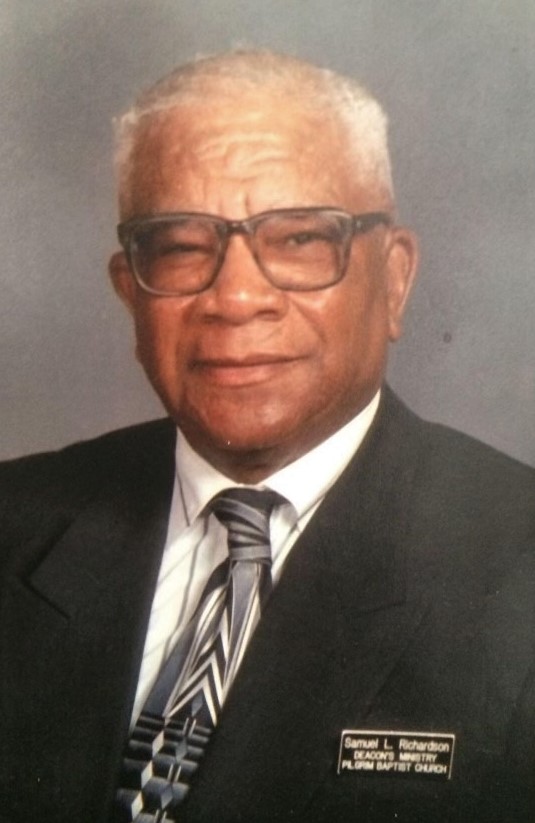 
Samuel Louis Richardson Sr., affectionately known as "SL" was born to the late Judge Richardson and Verley (Richardson) Funderburg on November 25, 1922 in Birmingham, Alabama. God called him to eternal rest on January 4, 2021 at the blessed age of 98 years old.

Samuel accepted Christ at an early age and was a member of the Bethel Baptist Church in Birmingham, Aabama under the leadership of the late Reverend Milton Sears. He attended the Birmingham Public School system graduated from Ullman High School. Samuel joined the United States Army in February of 1943. After his honorable discharge he united in holy matrimony to Jane A Love and this union seven children were born.

In 1951 he relocated his family to Omaha, Nebraska. Samuel found employment at the Armor Packing House where he worked for thirty plus years and was a foreman on the kill floor. He also worked as a chef at the Fireside restaurant for many years and also as a cook at the Revolving Door Deli in the Westroads Mall. Samuel was an entrepreneur with his wife Jane, owning their restaurant located in south Omaha named after her called "Janie's". He was also the co-owner of Ladd's Service Station on 30th and Bedford.

"Deacon Sam" was a member of Pilgrim Baptist Church for 60 plus years where he served in the following ministries during his time: Deacon, Trustee, Usher, Culinary lead Chef, Sunday School Teacher, Finance, and Transportation.

"Gail & Family, I was so sorry to hear about your father's death. I know this is a very sad and difficult time for you and your family. And I know that God will continue to hold you close and provide strength and comfort in the days ahead."

"My heartfelt sympathy and prayers to the family, Deuteronomy 32:7 tells us to remember the days of old special moments spent together, valuable lessons given or comforting words shared together can be a source of comfort to the family during this time of grieving. "