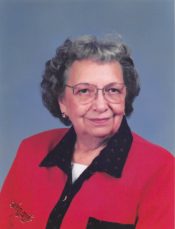 Aloma Jean Butterfield, 93, of Pensacola, Florida, formerly of the Algona and Swea City areas, passed away on December 4, 2020, at Regency Hospice in Pensacola.

On December 30, 1948, Aloma Wood was united in marriage to Beryl Butterfield in Jackson, Minnesota. After their marriage they lived in Algona before later moving to Swea City.
Aloma owned and operated her own beauty salon in Swea City for over 30 years. She was a member of the First Baptist Church for many years where she enjoyed teaching Sunday School, Bible classes as well as taking care of the children.