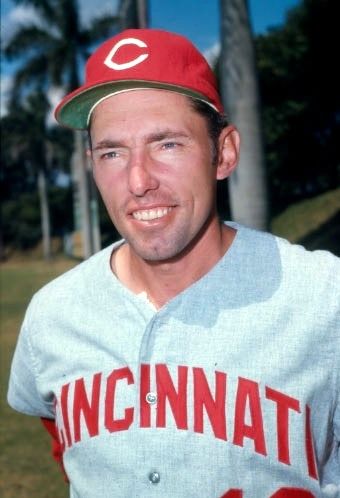 Denis John Menke of Tarpon Springs, FL, formerly of Bancroft, passed away at the age of 80 on December 1, 2020.

Denis enjoyed a 40-year career in MLB playing in the National League for the Milwaukee Braves, Atlanta Braves, Houston Astros and Cincinnati Reds. He was elected to the National League All-Star team in 1969 and 1970 and played with the Cincinnati Reds Big Red Machine in the 1972 World Series. After his playing career ended, he was an MLB coach for the Toronto Blue Jays, Houston Astros, Philadelphia Phillies, and Cincinnati Reds. He loved the game. Denis retired from MLB in 2000.

He was preceded in death by his parents, Walter Menke and Mary (Rahe) Menke, and his brother, Alan Menke.

"The best players are willing to grind it out." ~ Denis Menke

Private family services will be held in his hometown of Bancroft, IA.

"I only became aware of this today, March 1, 2021. My father, Thomas J. Devine was born and raised in Bancoroft, IA. My grandmother owned two farms in Bancroft and Denis\' father (Walt) and uncle farmed them, and they were good friends with the Devine family. My father and his (4) brothers and Walter and his brothers and cousins probably played baseball together. Until about 1967, my family would drive from New Jersey to Bancroft to visit each summer. I remember spending many evenings watching American legion ball in Bancroft. I also remember playing stick ball at the Menke farm and having a steak dinner after. Denis was already in the pros. In Denis\' first year in the majors, Milwaukee visited the Mets. My father worked for the FBI in New York City. Denis got tickets for all 6 members of our family. Walter Spahn pitched for Milwaukee. We got to meet Denis after the game. It was a very big deal for us. Either that year or the next, we had Denis over to our house in New Jersey for dinner after a game. He was a big hit with some of the neighborhood kids as he signed autographs. I think Denis went on a little hitting streak after the home cooked meal! Our family followed Denis\' career and were fans of whatever team he played for. If you read the record of his career at the link below, it mentions the ball he hit that Joe Rudi caught at the fence in the World Series against the A\'s. It correctly said that it was one of the great World Series catches. Denis had a great fielding series at third base. I still remember Curt Gowdy comparing his fielding to Brooks Robinson\'s in the series one or two years before. If that ball had been a hit, the Red\'s would have won that game and probably the series. If that happened, Denis would have had a chance at MVP in my opinion. https://ripbaseball.com/2020/12/14/obituary-denis-menke-1940-2020/ If you should read this, please realize how much we as a family liked Denis. I probably met him on only 3 occasions, but he was so friendly and gracious. We always watched him whenever his team was on television. And, of course, he was a Bancroft boy playing/coaching in the Majors and that made him special, too. My deepest condolences to your family. We will always remember Denis. Tom Devine (brothers and sister Anne Mary, Neil, and Matt)"

"Just a fan offering my condolences to Mr. Menke's family. The first ball glove I ever had was a Denis Menke autographed glove."

"Was honored to know Denis and Jean during their time in Atlanta. We live just down the street from their old home in Dunwoody and always point out that that is where Denis lived. Was at the first game the Braves and Denis played in Atlanta in 1966 and am proud to have known them personally and that they began their Real Estate careers with Fields Realty. Much love to the family... "

"As a lifelong Cincinnati Reds Fan, and former resident of Terrace Park Ohio, I was fortunate to meet Denis in 1999 in Chicago at Wrigley Field. What a great person and perfect gentleman. My Condolences to the Menke Family "

"Denis carried his Bancroft and Iowa values to the \'Big Leagues. I was fortunate to grow up following his career and in Radio was privileged to interview him throughout his career and at a special day in Bancroft after he retired. When I interviewed Sparky Anderson during the World Series, he told me that Denis Menke was a special person, and would be a great Manager if he wanted to be. Just 2 weeks ago I found the last interview that I did with Denny. Great memories of a great guy. Dave Potratz, Former KICD Sports Director and Sport Celebrity Spotlight host."

"Always proud to be a 1st cousin of Denis Menke. It was a pleasure following him throughout his 40 years in the Majors. His hard working ethics were always evident and something Bancroft and all Iowans can related to. He was humble yet focused on the task at hand. He led by example. One highlight for me was when Denny asked me to receive his Induction into the Hall of Fame award for one of the outstanding American Legion players in the state of Iowa. The award ceremony was in Cedar Rapids where I currently reside. Denis actually started his professional baseball in Cedar Rapids withe the Braves organization. There were three award winners that day, Mike Boddicker, Bob Feller, and Denis Menke (and receiving the award on behalf of Denny was me). A very special day indeed. God Bless your family with all the Love ?? as they hold their own personal memories close to their hearts during this Christmas season. May the angels, saints, and all former ball players welcome you into paradise. Thank you for the memories! Deacon John and Patrice Winkel"

"I met Denis in 1990. I was a utility infielder with the Phillies and he was my hitting coach. ?Menks?, as I affectionately called him, was an outstanding teacher. He was calm, patient, and very observant. It rarely took more than 5 minutes for him to help me iron out whatever problem I was having with my swing. Many of the lessons I now share with youngsters came from ?Menks?. He was good man, a kind man, and an excellent teacher. I will always be glad our paths crossed. Rest in peace my friend."

"So sorry to hear of Denis? passing. Harry loved him as a coach in Houston. Remembering the fun times we had when you all would come to our apartment and entertain Kelly. Sending love and hugs!"

"Played a lot of baseball with Deny-was his catcher in high school. Had some nice visits with him when he would come to Algona to visit family. Always hard to see a friend pass away. Our deepest sympathy. Keeping you in our thoughts and prayer."

"My sincere condolences to the family. I played baseball with and against him in the late 50\'s. He was great for the game and a true gentleman. He will be sorely missed."

"One of the best roomies a guy could ask for. Oh, the great times we shared! May the peace and comfort only God can provide at times like this be with the family. See you in heaven roomie."

"I remember very fondly going to Wrigley with ,y grandpa and cousins when the Reds were in town and sitting right behind the Reds dugout, getting balls tossed to us from the Reds players. I cried when Joe Rudi made the amazing catch to rob Deny and the Reds in the 72 series. My brother would ready the box score every day and let us know how Deny did. Great memories. Deny was a true pro, it seems, based on the many accounts of his baseball career. He gave the folks in Bancroft and Kossuth county something they could be truly proud of. Man, I\'d like to see all of the Menke boys on the field right now. (Walter and Johnny were no slouches either, as my father-in-law would always say.) Play ball!"

"Dennis was my hitting coach when I was playing for the Reds. I had tremendous respect for him and the knowledge he brought to his craft was second to none. I can?t tell you how many times he sat down with me and not only helped in my hitting but calmed me down. More than that, he was a consistent man day in and day out that I learned to respect. It was an honor to know him. Praying for comfort for family along with rejoicing over his legacy. "

"I was the athletic trainer for Denis in Burlington in 1977 and then again in the Florida state league in Dunedin. I have many fond memories of him. He helped mold me into who I am today. When our 1977 team gathered a few years ago, all of us had nothing but great words and recollections about Denis. Thoughts and prayers to all the family. I was so sad to hear about this . Shaun McCarthy "

"Sorry for your loss so sorry to hear this.I remember as a little boy we had Denny Menke days when he game home !!! And still have a wooden bat pencil that has Dennis Menke on it . May your Families have healing and many awesome memories ?? And many prayers are with you all !! ???? "

"Our thoughts and prayers are with all of you ? ? Lyndon and Mary (White)Fowler "