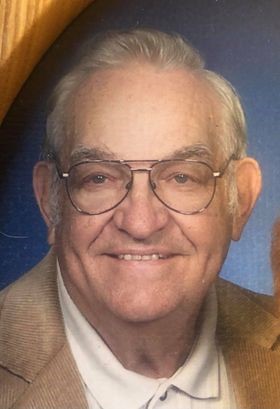 Roger Bernard Rolfing, 86, of Winona passed away peacefully on Friday at St Anne's Extended Health Care due to complications from COVID-19. Roger was born in Wilson Township, Minnesota to Ben and Florence (Koenig) Rolfing. He graduated from Winona Senior High School in 1952. Afterwards, he briefly worked in Milwaukee, Wisconsin then came back to Winona to start a 41-year career at Lake Center Switch Company (aka TRW). He started as a press operator then began an apprenticeship to become a tool and die maker. Roger was a loyal employee and rarely missed work. He was an Amsoil dealer for over 45 years. Roger was also a lifelong member of The Catholic Church and attended many of the catholic churches in Winona during his lifetime.

Roger grew up on the farm in Wilson Township among 10 other brothers and sisters. On the farm, he was known as the "Kool Aid Man" to nieces and nephews for always making Kool Aid for them to drink. He also worked in the field bailing hay, tilling the garden, cutting wood or whatever needed to be done to help out.

On August 10, 1963, Roger married Mary Anne Roberts at the Cathedral of the Sacred Heart in Winona. Roger was a bit of a handyman and would often work on small projects around the house including maintaining his own cars. Roger enjoyed attending all the extra-circular activities of his children and grandson's that he could
make. Roger was an avid hunter and fisherman often hunting deer, squirrel, ducks and pheasants along with his black lab named Spike. He made several trips to South Dakota with his co-workers to hunt pheasants. Roger liked to fish in Lake Winona or the Mississippi River and towards his later years went to Sioux Lookout, Ontario Canada to chase the big fish. Roger was a Minnesota sports fan and followed the Twins, the Vikings and the Gophers. He and Mary attended the 1991 World Series between the Twins and the Atlanta Braves. On June 12, 2004 Roger received a kidney transplant at Mayo Clinic which allowed him to more fully participate in life activities.

Roger is survived by his wife Mary Rolfing of Winona and his two children Tim (Sue) Rolfing of Woodbury Minnesota and Tricia (Jay) Meinke of Omaha, Nebraska. He is further survived by grandsons Chris Rolfing, Brandon Rolfing and grand dog Abby; brother Bernard (Barbara) Rolfing; sisters Lilian (Jerry) Abts, Sally Reitz and Audrey Rolfing and many nephews and nieces that loved him dearly. Roger was preceded in death by his parents; brothers Frank and Earl Rolfing; sisters Rita Thill, Marietta Johnson, Lorine Thorn, and Liz Matton. The family would like to thank the staff at St. Anne's Extended Health Care for Roger's special care and attention during the past six and a half years, especially during this difficult time.

Memorials may be sent to St Anne of Winona, 1347 West Broadway, Winona MN 55987. Online condolences may be left for the family at www.hofffuneral.com. Cards may be mailed to Hoff Funeral Home, C/O Roger Rolfing Family, 3480 Service Drive, Goodview, MN 55987.

Celebration of Life Services for Roger Rolfing are planned on Saturday June 12, 2021 with the hope that we can safely join together again.

Please send any digital or hard copy photos involving Roger from childhood on up to:

tjrolfing@comcast.net (can send via email for digital photos) or directly to

We will be creating a slide show that we will show during the Celebration of Life.

Also, we will be sharing stories of Roger, including memories of him growing up on the farm including sharing "Kool Aid", training his dog Spike, selling Amsoil, working in the tool and die room at Lake Center, hunting, fishing or anything else that you can think of that is unique or funny. We want to hear from you! If you would like to share a story at the luncheon, please let Tim know.

Thanks to everyone for your continued support and hope to see you there.

"Mary, Tim, Tricia. I have been thinking of uncle Roger alot lately. I am so heart broken for all of you. I have many memories of uncle Roger coming to the farm to feed and taking care of his dogs. I can still visually see that big tin bucket of dog food he carried. I enjoyed following him to the kennels. Mom often talked about How Roger had to always drive her and her sisters in town for dances etc. He was a very special brother to her. We will miss Uncle Roger but I have very fond memories. Bless you as you navigate through this journey. I love you guys. Kathy Bergman"

"Tim and Sue, so sorry for your loss. You and your family are in our thoughts and prayers. Love you!"

"Mary, sorry for your loss - may memories bring you comfort and peace, Diana"

"Mary, sorry for your loss - may memories bring you peace and comfort. Diana Thorson"

"Thinking of you Tim. Sending our sympathy. Hope you are doing well. I see you live in Woodbury. The Grob?s "

"Mary, Tim and Tricia: I am so sorry that we lost Uncle Roger. He was a gentle soul and so sweet! The kool aid man was his name. He knew what we liked. I was honored to be your flower girl at your wedding. I will never forget the wedding and how Roger asked me to be the flower girl. He made it so special. Wish I could give you all hugs, but know that you are in my prayers! Love you! ?Sherry?"