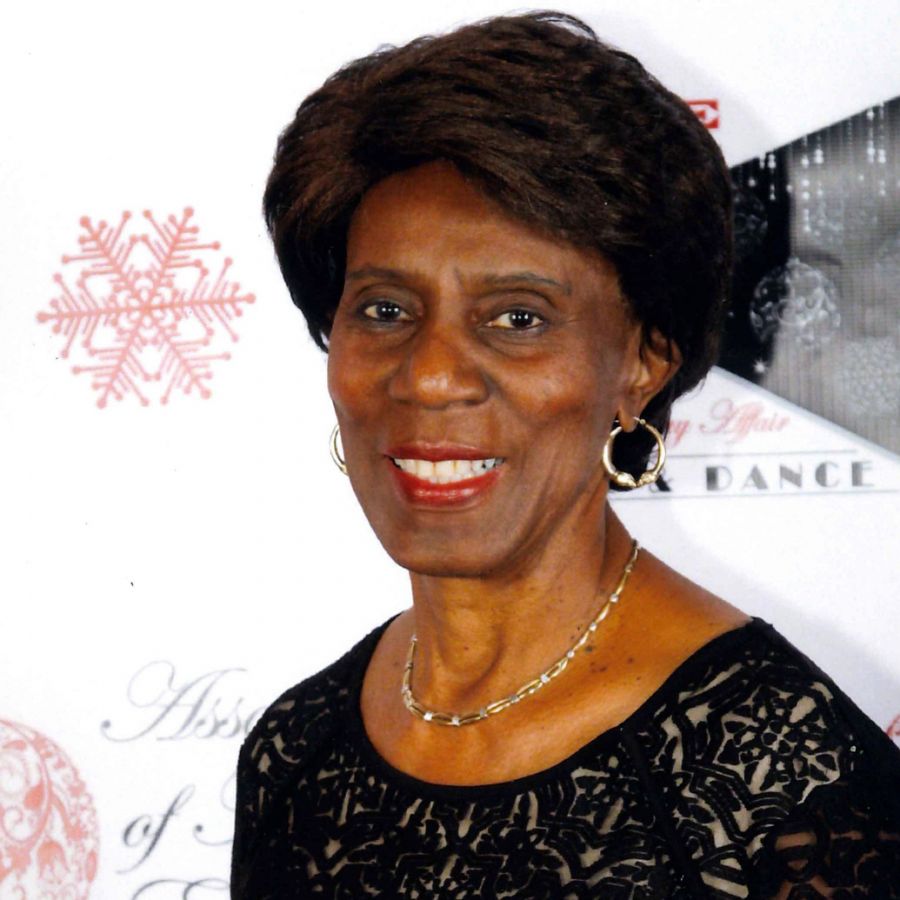 Evelyn (Emerline) Simmons Rickett was born June 4, 1943 in Harris, Oklahoma, to her parents, Ross and Mirtis Simmons. She was the second youngest of sixteen children - eight brothers and eight sisters. She received her education in Harris, Oklahoma where she graduated from Riverside High School in 1962. With the blessing of being raised in a loving Christian home, Evelyn accepted Christ at an early age. At the age of 18, she moved to Albuquerque, New Mexico where she attended barber and beauty school. This is where it all started as she began to establish her hair cutting skills. Once she graduated from school, she moved to San Diego, CA where she met and married Charles Rickett on July 6, 1966. This union was blessed with three beautiful girls: twins Vanessa Renee and Arnessa Rekay and a year and a half later, Buffie Marlene.
Evelyn joined Christian Fellowship Congregational Church in 1974, serving faithfully in several ministries; the Women's Fellowship, Trustee Board, Nominating Committee, President of the Sanctuary Choir, the Council Board, Church Event Committee, Mentor for the Youth Group Ministry, and her biggest passion - with the Youth Choir as Choir Director. She directed the youth choir for years, coordinating youth gospel concerts where so many were blessed by the music and singing of God's praise. Ms. Evelyn would always say, "You better get to the concert early... there will not be a seat left in the church house". In addition, she often volunteered at church events, vacation bible school and other church functions. In 2017, she received the Recognition Award expressing appreciation for 40 years of dedicated service to the Church.
Evelyn, known also as Ms. E or Lady E, was a barber and stylist for 59 years, retiring in June 2020. She started her career in barbering with Uncle Elijah Gentry at Gentry's Barber Shop on Imperial Avenue. While cutting hair on the side, she attended San Diego City College where she earned a certificate in clerical administration. She was employed at California First Bank for several years, until she was hired at San Diego State University in the Admissions and Records Office. After retiring from SDSU due to health reasons, she continued to cut hair at James Barber Shop located in Otto Square on National Avenue. Eventually, the shop relocated to Market Street and became one of the most popular barber shops in town.
Ms. Lady E was all about her business, and her classy style set a precedent that no one could duplicate. Her beauty, inside and out, allowed this strong, amazing woman of God to touch so many people's lives. She filled her barber shop with laughter, deep conversations about politics, the next NBA championship winner (yes, she knew basketball well - she was a talented point guard in High School - #55), as well as advice and direction - but mainly she talked about how good the Lord is and how prayer works, TRUST GOD.
Her favorite past-times included shopping at Macys, spending time with her beautiful daughters with whom she was always very close, watching sporting events, gardening to plant flowers, plants and trees and reading the bible. She was also very active in the Martin Luther King Jr. Community Choir of San Diego for over 20 years, where she was insured that the ladies were properly attired.
At 2:49pm on November 13, 2020, God our Father called a wonderful angel to join him in Heaven. She fought a long fight, but the suffering and pain is over. She was preceded in death by her parents, Ross and Mirtis Simmons, brother Deloyd Simmons, and sister Orri Simmons. She leaves to carry on her legacy, her daughters whom she loved and cherished, Vanessa Rickett, Arnessa Rickett-Jones and Buffie Rickett; much-loved son-in-law, Charlie Jones; brothers, Curtis Simmons (Doris), Climmie Simmons(Vicki), Edward Simmons(Kathy), Phillip Simmons (Sharlonda), Prince Simmons, Ross Simmons, and Van Simmons(Theresa); sisters, Carolyn Simmons, Daisy Hogg (Leroy), Loretha Davis (Dennis), Mary McCarty, Phyllis Simmons and Rachel Simmons; aunts, Georgia Gentry-Jones, Jessie Gentry-Rolf; cousins, Alan Gentry, Elijah Gentry, Stanley Gentry and Walter Gentry; God-Daughters, Kayshawn Shelton, Indya Grier, Patrice Thibodeaux, Tonya Smith and Yolanda Greer; God-Son David Henry, Eldridge Pressley; caregivers Karolyn Steele, Kelly Carter Sherrill; dearest and close friends Beverly Murrell, Dante Griggs, Kathy Gilmore-McPherson, and Patricia Maxwell; several nieces, nephews, and host of relatives and close friends.
We love you Ms. Evelyn "Lady E" Simmons Rickett. You will forever be in our hearts.

"With all my heart I want to express my condolences to the family. Evelyn and I grew up in the same community, went to school together, went to church together, we cheered for one another on the basketball team, we were in high school plays together, and I could go on but I won\'t. Curtis and I graduated together and were starters on a very successful basketball team. Evelyn was a very good player as well. Her parents were part of the community that it use to take to raise a child. We grew up in a small close community, so there was always someone there to correct you if need be. I met one of Evelyn\'s daughters in the 1980\'s I think, she was quite young and I don\'t know which one. I last saw Evelyn at our high school reunion I think about four years ago. We were not in touch otherwise, I never knew she was sick so I was shocked to hear of her passing. Children usually follow in their parents footsteps, Evelyn\'s parents were God loving people, so I know this is a God loving family. Hold on to God\'s unchanging hand because all healing comes from him. "

"Vanessa, Arnessa, Buffie & Family - Our prayers are being sent up daily for your strength & comfort. Continue to stick together and be strong. Your Mom is in a better place and I know that it has to be hard to have had to let her go, but the Lord knows what is best for each one of His children and He didn\'t want her suffering anymore. May she rest in His arms in perfect peace. We love you and are here if you need us. Geri Sevier and the entire Sevier Family. May God continue to Bless & Keep You!"