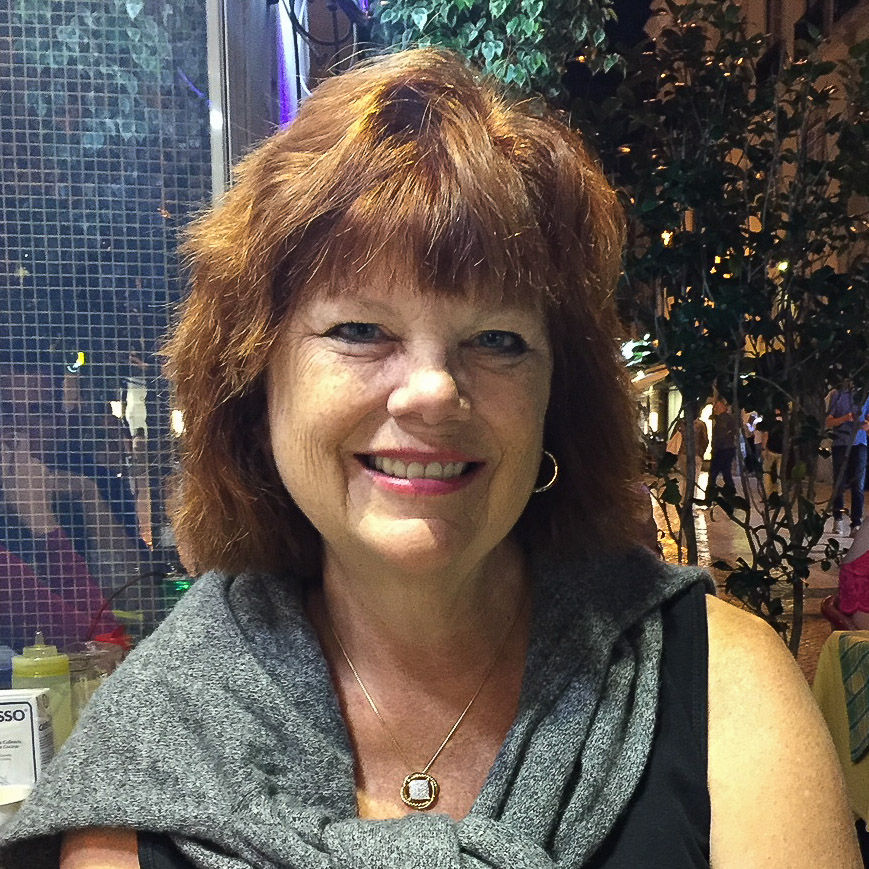 In the early minutes of September 1, 2020, Cindy Thompson English passed away in her sleep and in her home after a six-year long battle with Breast Cancer at the age of 57.

Cindy was born February 10, 1963 to Walace Thompson and Kathryn Thompson, née Gilmore, in Omaha, NE. Cindy was the youngest of Wally and Kay's five children. They say that parents who name their children with names that end in a long e sound subconsciously want their children to stay young forever and there is no better case of this than the Thompson clan: Jimmy, Timmy, Susie, Tommy, and Cindy.

Tragedy befell the Thompson family when young Tom died of Lymphoma at the age of fifteen. Seeing the pain the death of her brother caused to her parents, ten-year-old Cindy swore that she would never give her grieving parents a reason to worry or cry. She vowed then and there to stay out of trouble, achieve scholastically, and to never be a burden to her deeply heartbroken parents.

Motivated by the promise she made to herself, Cindy graduated valedictorian from Thomas Jefferson High School in Carter Lake, IA in 1981. The contest between her and the saludetorian was so tough, administrators went all the way back to elementary school records to break the tie between their top students.

With a slew of scholarships for scholastic achievement, essay writing, and debate, Cindy started college in the fall of 1981 at The University of Iowa, although she would later transfer and graduate with a degree in Finance from Creighton University in 1985, exactly 4 years to the day after her high school graduation.

Shortly after graduating college, Cindy began working for Nevada Power Company in Las Vegas. Starting out as an analyst, Cindy advanced through the company becoming the first female Power Trader on the western power-grid working to keep the "neon capital of the world" lit up. But a successful career wasn't all that was waiting in store for Cindy in Las Vegas. Despite already being an excellent public speaker, she began regularly attending a singles-only Toastmasters Club meeting. She admittedly wasn't there to better her rhetorical skills, but to try and find a man who could match her level of reparteé. She saw Loren English on her first night of Toastmasters, though it took awhile for the two of them to actually meet.

The two floated around in the same friend circle for a couple of years, but it wasn't until Loren worked up the courage to offer to buy her a drink they actually spoke. The problem was, Cindy was already drinking a Diet Coke (of course)... the conversation went as follows:

A friend standing with Cindy and who had watched the events unfold was astonished. What nerve! How did Cindy respond? She laughed. She thought this was the funniest and boldest pick up she had ever seen and she let him buy her a replacement Diet Coke.

From there they would date, get engaged, and wed on September 1, 1989. Over the next ten years, they would give birth to three, healthy children Sarah, Matthew, and David. All three would spend the early years of their lives in Las Vegas, but when a career opportunity for Loren arose in Alpharetta, GA, everyone would leave their lives behind and drive across the country to start a new adventure.

The early days of their Georgia adventure involved Cindy staying at home. Going from career woman to housewife was tough for Cindy who longed for success outside of the home. She took a number of small jobs, became a Master Gardener, did some volunteer work, and even managed to log thousands of hours in the massively multiplayer online role playing game World of Warcraft, but it wasn't enough. She needed a challenge. For a woman who had excelled at just about everything she had ever attempted, she knew she was going to have to go big. So Cindy signed up for an LSAT prep class and set her sights on Georgia State University Law School.

Her acceptance letter to the law school came on her 45th birthday and that Fall, Cindy went back to school. In her three years at GSU she managed to snag coveted internships. The first internship was with the Georgia State Office of the Capital Defender where she learned about the fight to keep accused murders off of death-row and, in the following year, Cindy interned with the United States Attorney's office where she worked on an active, human-trafficking case. In 2011, Cindy received an award from Attorney General Eric Holder and presented by Sally Yates who oversaw the Atlanta office before leaving to become the Deputy Attorney General.

In 2019 Cindy became a Magistrate Judge in Forsyth County Georgia, appointed by Chief Magistrate Judge Walker Bramblett. Cindy had been before Judge Bramblett countless times as council and was deeply honored when he asked her to join him on the bench. Sadly, Cindy was only able to hold the position for a matter of months due to the progression of her cancer.

Cindy passed away peacefully with her husband Loren at her side on their 31st wedding anniversary.

Cindy is survived by her husband Loren English, her daughter and her son-in-law Sarah and Galen Maret, her sons Matthew and David English, her grandchildren Elaina and Nathan Maret, her mother Kathryn Thompson, her siblings and their spouses Jim and LeeAnn Thompson, Tim and Karen Thompson, and Sue and Dave Goalen, her nieces and nephews, Skip and Nichole Hammons, Chip Thompson, Wally and Kitti Hammons, Katy and Bryan Nun, and Timmy Thompson.

"Cindy and loren were my neighbors growing up and i use to babysit sarah and matthew.They were always good to me and i have fond memories of the whole family..im sad that Cindy is gone too soon and im sure Mollie was there to greet Cindy in heaven."

"Sending our most sincere condolences. Cindy will be greatly missed. The English family has always had a special place in my heart and always will. Much love from me and the whole Schofield family."

"Cindy was like a Peace Lily, perfect in every way. She brightened every room she entered. It was my pleasure to know her and call her my Friend. She is truly loved by so many and will be missed."

"Cindy was one of the good ones! My sympathy to her friends and family."

"I am so very sorry to hear this news. I had not seen Cindy in years, but our sons played together when they were little boys and remained friends as they got older. Our heartfelt condolences are with the English family. May Cindy\'s soul rest in peace."

"I only met Cindy once or twice, but she was a beautiful spirit. I have loved her son Matthew since the day I met him. My heart and prayers go out to her family."