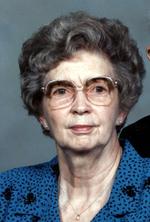 
Marie was born on August 18, 1924 in Daleville, Indiana to George T. and Margererite (Denny) Fisher.

She attended Burris School in Muncie for 11 years and graduated from Daleville High School in 1941. Marie particiapted in both basketball and softball while in high school She married Charles W. Swift in September 1942. He preceded her in death.

She was a telephone operator in Fairmount, worked at the Fairmount License Branch, and Marion General Hospital. She worked at RCA (Thompsons) making tank radios during WWII. She later transfered to the Credit Union where she became a Loan Officer.

She as a member of the American Kennel Club, American Legion Auxilary, American Business Women and 62 year member of St. Pauls Catholic Church. Marie and her husband Bud enjoyed raising and showing Dobermans.

She is survived by her

Two Sister,
Barbara Tommey of Parker City, Ind. and and Patty Shelby of Pendeleton IN.

One Brother,
Brother-Richard P. Fisher of Greenfield, IN

She was preceded in death by her parents, husband and 2 brothers George A. and Robert Fisher.

Arrangements are being handled by Armes-Hunt Funeral Home, 415 S. Main St., Fairmount, Ind.I Funeral Mass is at 1:00 PM on Friday, December 11, 2009 at St. Pauls Catholic Church, 1009 Kem Road, Marion, IN with Father Richard Weisenberger officiating. Interment will be at Park Cemetery in Fairmount, Ind.
Visitation is 2 hours prior to the service time at the Church.