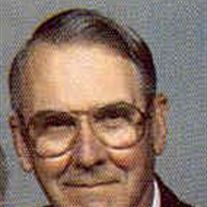 "To Ann and family. Our sincere condolences. You bought our farm and whenever I return to the Matthews area, I always drive by and wonder if that basketball goal is still up in the barn. My dad and Lawrence did a lot of farming together. Dennis & Betty Yoder"

"A message to the framily: I moved to a farm on State Rd 26 in 1970. I soon became aquainted with Lawrence Garrison and knew that I had found a good friend. I had the utmost respect for this man and the way he lived his life. I also respected his farming knowledge and ask for his advice about various things many times. I was honored to serve with him as a director or the Mathews Feed and Grain and again I leaned a lot from Lawrence. I have had many pleasant visits at my cabin on 26 when we would talk and share ideas about life, farming, and family. The world would be a much better place if we had more people like Lawrence Garrison. He will be missed by his family, and by his many friends. I will miss having breakfast with him and jokeing with him, and other times talking about some very serious subjects. Lawrence affected the lives of many people that will remember him for ever. William M. (Bill) Jackson"

"Sending my deepest sympathy to the entire family. My thoughts and prayers are with you all."

"Larry, Sorry to hear about your father. Hope you guys are well. We'll get together soon. Take care and God bless you. Mark, Liz & Caitlin Stamper"