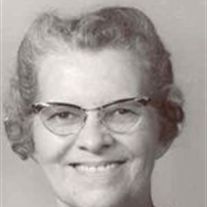 Upland: Ellen P. Henderson, 96, went home to be with the Lord at 7:30 a.m. Wednesday morning at her daughter's residence. She was born in Bremen, the daughter of the late John and Lillie (Shenefield) Cline. She was a 1929 graduate of Elkhart High School. She married George Henderson, who preceded her in death in 1962. She moved to Upland in 1998 after being a life long resident of the Elkhart area. Mrs. Henderson had been employed with CTS of Elkhart retiring in 1976 after 46 years. She had been very active during much of her life, in Christian education leadership positions in two different churches: The Osolo Missionary Church of Elkhart and the St. Mark Missionary Church, Mishawaka, where she was a member. She also volunteered her services as a member of the Hubbard Hill Retirement Center auxiliary group. Survivors include a daughter, Patricia (Charles "Tim") Kirkpatrick, Upland; a half sister, Maxine Colby, Elkhart; three grandchildren, Doris, Charles, and David; and one great grand daughter, Grace Marie. Memorials may be made to Bethel College, 1001 McKinley Ave. Mishawaka, IN, or Grace Children's Hospital, Haiti, % International Child Care/USA, 3620 N. High St. #110, Columbus, OH 43214. Service 10:00 a.m.Tuesday July 17, 2007 Wally-Mills-Zimmerman Funeral Home 700 E. Jackson Elkhart, Indiana Officiating Rev. John Moran Interment Rice Cemetery Elkhart, Indiana Visitation: Monday 6-8 p.m. At the Wally-Mills-Zimmerman Funeral Home Elkhart, In. Local arrangements made by Jones-Smith Funeral Home 259 N. Main Street Upland, Indiana 46989 765 998 2101

"Pat, Tim, & family, Our thoughts and prayers are with you at this time. We are sorry that we could not come up to Elkhart to share with you, but Mick is just not able to drive or ride for long distances. Thank you, Billie & Mick"