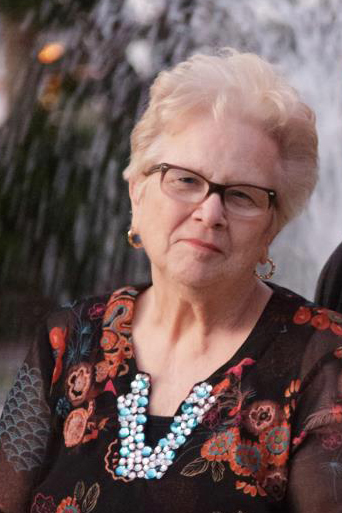 Carol Jean Ecker, 82, born April 7, 1938 in Ravenscroft, TN, a longtime resident of Crescent City, FL and member of Beulah Baptist Church before she passed away Saturday, July 11, at 4:00 am at North Florida Regional Medical Center, after a long history of "serious heart problems" that she was able to always survive (up until now, anyways). While there is not a way to sum up her life in a few words, the following will hopefully shed light on how those who knew her best will continue to think of her.

Carol will be most remembered as a loving and devoted wife, sister, mother, and Nanna, that didn't have time to say things twice. She raised 10 children and was a second mother to numerous others who were lucky enough to wander in or be brought into her home. It's left to us to finally figure out which of us were her favorites, as she often had to go through the entire roster of kids' names just to get yours correct. More than likely her favorite was among her 9 fur babies, of which Oscar is her final companion. Carol referred to her bunch as a very quirky, colorful young 'uns, that she was extremely proud of, nonetheless.

Her illustrious work career included time as a waitress, hardware store manager, school bus driver, owning a catering business, and being a real estate broker. This means she could sell you the house, the tools to fix it up with, drive your children to school, whip up a meal for your family, and serve it directly to your dining table. She could often be found in the kitchen doing what she enjoyed best, which was to love others with her home cooking. Her fried chicken, chicken & dumplings, and pink lady were often the highlight of holidays, church dinners, weddings, and any other large family gathering. These will be missed, as she never cooked from recipes, so we are now left to try our best to recreate these on our own.

As a lasting memory, Carol left behind her a 4 bedroom home, 3 storage units, and a carport filled to the brim with stuff for her "Dammit" James and children to sort through, even though they have no idea what to do with most of it. In her defense, she often stated that it was her children's own fault, as they were the ones to give her all the stuff in the first place.

Due to the recent situations, services will be held at a date yet to be determined. Let it also be said that it is suspected that her passing was more than a coincidence that will allow her to avoid having to make a decision in the upcoming presidential election.

In lieu of flowers, the family asks that donations in Carol's memory be directed to the American Heart Association. If you also opt to take a moment to honor her in song, the family recommends Dolly Parton's "I Will Always Love You", which she sang to her children, and they will continue to echo back to her for their remaining days.

"Stella Vierra & husband Roger I am a writer on some part and I could easily write a book on this woman. She has so many Wonderful things that have left their mark on people\'s lives. We last got to talk just a few days before she became ill and had to go to the hospital. For years I saw things my mother would do and I didn\'t always understand why, then when Aunt Carol and I were talking the last time, I started laughing because we were talking about clowns, I don\'t know why but anyway, I had made the remark of I don\'t know why the movie industry has taken a childhood smile maker and made it horrifying to the point children and some adults are afraid of them. She laughed and said that\'s the problem, life is like a clown suit, people don\'t look deep into the character and find the good in it. I remember one-time mom told me to look beyond the fault of someone, Everybody has a good point, you just have to look for it and be patient while it shows up. I told Aunt Carol, \"Now I know where mom got it from, ya all had the same teacher....., Grandma Whitehouse.. That\'s what I loved about her, No matter how wrong you were she would Love you just the same. She was Not one to dwell on your faults, but instead, she would point out your positives in your life and push you to work on them more. Though I am glad she no longer hurts, She is gonna be missed way, much more than one can predict. My husband and I will be together 48 yrs in Sept. and she told me since I have been together as long as I have with my man, I surely was blessed to get a man like my Uncle Jim who is the Portrait of Love and courage. She was so very proud of him and missing him and truly knew what God meant by Love in him...WE LOVE YOU AUNT CAROL SO VERY MUCH AND WILL MISS YOU."

"What I will always remember about Carol Ecker ( my mother in law ) Is that any time I had any questions about heart related things or medications she always seemed to have had some kind of answer. Being that she had heart trouble I knew she was pretty knowledgeable of those things . Also times I was very scared for my husband on his near death heart experiences she always told me GOD IS one Who IS in control . No one wants to die but she told me that actually it\'s a win win situation .if he lives PRAISE the Lord. If he passes then he is with God no more suffering. As we don\'t want to be without our loved ones being with the Lord is comforting to know. I remember she told me that and I won\'t never forget it . I\'ll miss my time talking to her on the phone about everything And anythng..She always had advice about something. Will miss her but I knk w will see her again in God\'s time ."