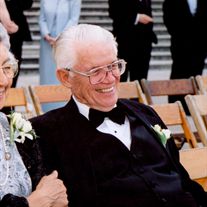 Robert L. Norris, 79, of Mt. Pleasant, died peacefully Jan. 29, 2006, at his home. After a private family burial, a visitation will be from 2 to 5 p.m. on Saturday, Feb. 4 at the Olson-Powell Memorial Chapel in Mt. Pleasant. In lieu of flowers, memorials may be made to Hospice of Central Iowa or the Mt. Pleasant Public Library. Mr. Norris was born on May 1, 1926, in Philadelphia, Penn., at the home of his parents, Emily Pearl Guntrum and Wade Latrell Norris. He attended Miller Elementary School and Stephen Girard College, both in Philadelphia. He worked at a department store at age 14. He worked at Penny Railroad and National Fire Brick before he was drafted into the Army in 1944. He served in Italy and was honorably discharged in 1946 with the rank of tech sergeant. He graduated from Iowa Wesleyan College where he met his future wife. He married Irene M. Manley on Sept. 17, 1949, at the Methodist Church in Mt. Pleasant. He was treasurer of Sigma Phi Epsilon Fraternity and worked at Whaley's filling station, worked at Wieke's restaurant in Clear Lake, kept time books for the workers constructing Lincoln Elementary School and worked at Modern Laundry. He was the bookkeeper at Eland Service Station, Kenny Richards Service Station, Martin Service Station, the Temple Theatre and Payne Service Station. He began working at Henry County Savings Bank in January of 1950, serving as a teller and continued working at that institution until 1985. At the time of his retirement, he was president of Firstar Bank. He marked only 1 sick days in 35 years of service. He was the treasurer of Red Cross, Cancer Society, Benevolence Committee of the Methodist Church, Rotary (30 years), Jaycees and Mt. Pleasant Golf and Country Club. He was named a Paul Harris Fellow by fellow Rotarians, was a Cub Scout pack master and was former president of Country Club on the River. He was a member of the First United Methodist Church in Mt. Pleasant. He was known and well liked for his fine sense of humor and quick wit. He enjoyed family, reading, traveling, woodworking and completing crossword puzzles. Survivors include his wife of 56 years; four children: Kathryn L. Prestidge of Appleton, Wis., Stephen G. and his wife Christina H. Norris of Pella; Sandra L. and her husband Reynolds Roth of Mt. Pleasant, and Gregory A. and his wife Jane Norris of Brooklyn Park, Minn.; seven grandchildren: Anita and her husband Aldean Hendrickson, Alex and his wife Carla Prestidge, Acadia Prestidge, Samantha Norris and her husband David Schwartz, Michael and his wife Kelly Norris, Mikayla Roth and Aaron Roth; and three great-grandchildren: Carlye Prestidge, Anne Schwartz and Aidan Hendrickson. Preceding him in death were his parents; two brothers, Art Norris and John Norris; and a sister, Marie Spross.