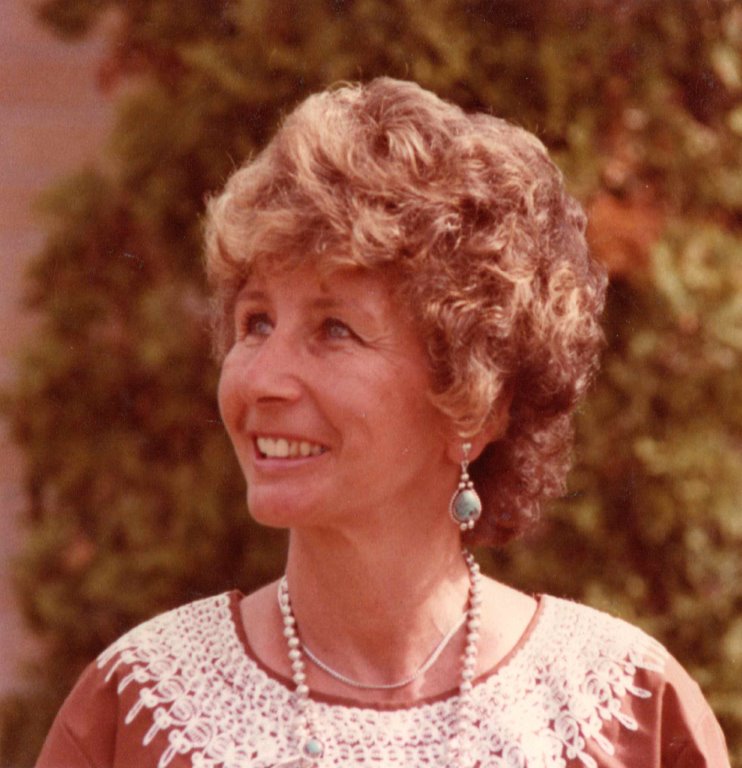 June A. Jamrich of Jacksonville, Florida, formerly of Marquette, passed away peacefully after a short illness on April 20, 2020. She was born October 16, 1924 in Kenosha, Wisconsin to Anna and John Hrupka. Her parents were hardworking immigrants from Slovakia, who lent patriotic efforts through two world wars and the Great Depression.

June grew up in the heart of the Wisconsin Slovak community, with a childhood that included Slovak Language Sunday school, participating in the Sokol athletic group, and local divadlo (theatre) productions.

In 1944, June married a handsome Air Force captain, John X. Jamrich. The marriage required a special dispensation from Russell Sage College, which she was attending, but at the time enrolled only unmarried women. As a war-time bride, the dispensation was granted, and the wedding took place at the Lutheran church in Kenosha. Friends and family pooled their ration cards to procure enough butter, flour, and eggs to create a three-tiered wedding cake for the newlyweds.

June graduated college in 1946 with a degree in merchandising and an exciting internship in New York City working at B. Altman. There she developed a style and grace that remained her trademark throughout her life.

She raised a loving family that eventually settled in Marquette, Michigan when her husband became President of Northern Michigan University. As "first lady," June graciously entertained faculty, staff, alumni, sports teams, movie stars, governors, presidents, and ambassadors. Her warm and caring personality provided support for individual students who appeared on her doorstep in need of a sympathetic ear and a cup of hot chocolate.

She made friends from all walks of life and enjoyed scrapbooking, golf, cross-stitching, fishing, and hiking in Michigan's magnificent Upper Peninsula. June taught Kindergarten in East Lansing, figure skating in Marquette, and lead singalongs accompanied by her husband at nursing homes throughout Florida. Although June and John retired to Florida, her most fond memories have always been for the gracious community members of Marquette and the faculty, staff, alumni, and students of Northern Michigan University.

June will be missed by her husband John X. Jamrich, by her sister Elaine Williams, by her daughters June Parsons, Marna House, and Barbara Johnson, by her grandchildren Tensi Parsons, Heather Neumann, John Bertagnoli, and Milan House, by her great grandchild John Christopher, and by other loving friends and relations scattered across the United States.

Graveside services will take place at the Park Cemetery on Sunday, August 9th at 1 p.m. with the Rev. Andrew Plocher of Messiah Lutheran Church officiating. The service will be livestreamed at https://my.gather.app/remember/june-jamrich

"I am saddened to hear of Mrs. Jamrich\'s passing. My husband and I frequently repaired her golf cart through the years at Cypress Village in Jacksonville and she was always as sweet as she sounded. Inviting me into her home and being very gracious to me. Always a kind word spoken. My condolences to her family. Cynthia Chute"

"I am deeply sorry for the death of June Jamrich and offer her family my deepest condolences. I am a former faculty member of NMU and the beginning and middle part of my career coincided with Jamrich tenure. I have very fond memories of them, of how open they were to faculty and students, of having open houses for both, of hosting relevant public figures and inviting interested faculty and students to receptions or dinners on their honor. They were very accessible, responsive, attuned to the questions of the day, and sincerely interested in the lives and activities of the whole community. They set a worthy example to follow."

"Vacation July 2001 We had lunch at a burger chain called Cheeburger Cheeburger and then drove to Venice to spend the rest of Thursday and all day Friday with Aunt June and Uncle John. They have a lovely home on the golf course. I know that June stressed over dinner but it was fine (fried chicken, mac and cheese, green beans, and corn). We talked about schools, education, our house, urban growth, technology, and family. John and Matthew spent some wonderful time together on the keyboard composing a song for Elaine. We were awakened Friday morning at 8:30 by a rain pounding on the tile roof. We let it pass as Uncle John prepared breakfast as he has historically done. Matthew had scrambled eggs and we had bagels. The weather opened up so we drove them to Sharky\'s Beach and Matthew found nearly a half dozen shark\'s teeth. A beach re-nourishment program hindered our find as did the rough water. Uncle John got pretty soaked wading into the surf to try to get to better sand. Matthew, June, and Lisa spotted two bobcats entering the brush as we approached their community. I turned around hoping to see them too but was too late. We had a chance to swim some in the pool while Aunt June fixed meat loaf, mashed potatoes, and carrots for dinner. Uncle John was napping when we hit the plumbing problem. The water in the disposal wouldn\'t drain. I wanted to take the elbow off since I suspected a clog. It was getting too serious when Aunt June and I rummaged through the garage looking for John\'s tools. He awoke and called the \"plumber on call\" who turned out to be an air conditioning technician. We fiddled with a snake but couldn\'t access the elbow from above. He went to Home Depot and got a plumber\'s wrench to fit the 2 1/2\" elbow. Zip, zap, zoom. We had it done. Uncle John felt good that we diagnosed and fixed a problem for only the cost of a wrench. They were glad for my encouragement and apparent expertise. I spent another night on the floor so that Lisa and Matthew could comfortable share the double bed. Of course we had key lime pie for dessert and then listened to stories about their 640 acres in Section 11 in Saux Head in the UP. The Mutt Robinson survey with the Boy Scout compass of their 300\' of lake front from the Kaufmann\'s was priceless too. I was up at 5:45am Saturday ready for the 750 mile drive home to Raleigh. John, Lisa, and Matthew Williams - July 12, 13, and 14, 2001 "

"Dear President Jamrich, It is with heavy heart that Suzanne and I send our condolences. We were fortunate to work at NMU during a good portion of the years you and June served NMU as President and First Lady. These years were some of the most exciting and productive years of our tenure at NMU. During this time NMU\'s growth and influence as a State University flourished under your and June\'s leadership. The legacy will live on as one of dedication and commitment to education in the Upper Peninsula and State of Michigan. I can truly say we enjoyed serving NMU during these years. We were fortunate to get to know you and June (not only as NMU\'s President and First Lady) but also through various Community Fund Raising Committees, Presidents Club, Golden Wildcat Club, Blue Line Club, and NMU events. June will be missed by many in the Marquette Community as well as NMU. We were sorry we missed seeing you and June when you were up for the dedication. Our hearts go out to you and the family! Our deepest sympathy. Michael and Suzanne Hellman "

"Dear President Jamrich, When I arrived at Northern Michigan University in the fall of 1969 you and June had recently begun your tenure as President and First Lady. Your years at Northern coincided with my student years and the first several years of my professional career at Northern, first as a Hall director and subsequently as the Director of Student Activities. The years that our time at NMU coincided were special ones. The commitment that you and June made to Northern was deep and abiding; indeed it has lasted to the present. I always had the confidence that you and June had the best interests of the university in mind during the exceptional growth years that you both contributed to so significantly. I am feeling a true sense of sorrow with June\'s passing and you have my sincere condolences. I am taking comfort, and I hope you will as well in knowing that June\'s life was one that was well-lived and that she will be missed by many at Northern Michigan University for all that she did for so many, including faculty, staff, and students. With deep sympathy, Dave Bonsall "