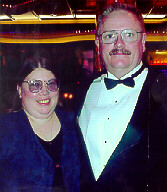 Ronald Allen Juul, 48, of 195 County Road 557, Gwinn died Wednesday afternoon at his home surrounded by family and under the care of Lake Superior Hospice.

Ron was born February 24, 1954 in Jamestown, New York, a son of Robert Juul and the late Phyllis Bush. On August 28, 1982 he married Carol Larson at the Messiah Lutheran Church in Marquette.

Mr. Juul was a veteran of the United States Air Force. He was employed with the Marquette Branch Prison for several years before his illness. He enjoyed many hobbies including collecting Troll dolls, woodworking, carpentry, hunting, fishing and cooking. His family and friends will miss his wonderful sense of humor.

Visitation will be held on Sunday in the Gwinn Funeral Home from 4 until 8 pm and from 10 am until the time of the funeral service on Monday at 11 am in the funeral home. Rev. Charles Tooman will officiate. Interment will be held in the Ishpeming Cemetery.

Those wishing to make an expression of sympathy are kindly asked to consider the needs of the family c/o Carol Juul, 195 Co. Road 557, Gwinn, MI 49841.

"Carol and family, I am very sorry for your loss. I work for Marq-Tran and was forunate enough to transport Ron. We had some good laughs and he even had me "troll hunting" for him at yard sales. He always said what a loving wife he had Carol, I just wanted to pass that along to you. Once again, I'm very sorry and you have my deepest sympathy. Laurie Van Damme"

"CAROL, IM SO SORRY FOR YOUR LOSS. I WILL LET STEFANIE KNOW ALSO. MY THOUGHTS AND PRAYERS ARE WITH YOU AND YOUR FAMILY DURING THIS SAD TIME."