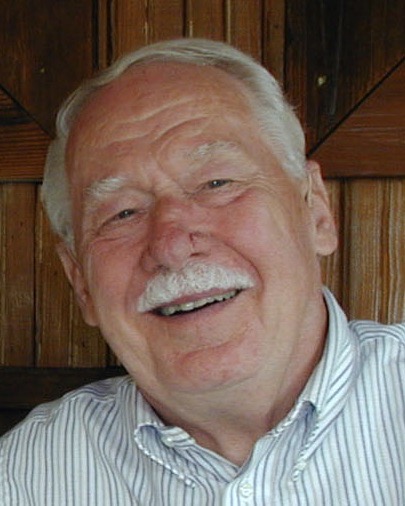 PHOENIX - Charles A. "Chuck" Runbeck passed away on Monday, March 9, 2020, roughly six weeks shy of his 92nd birthday. Born in 1928 in Aberdeen, South Dakota, his parents were Swedish immigrant Anton Runbeck and Wisconsin native Nina Hooper. In 1937, his family moved to Coolidge, Arizona, where he first entered the printing industry, helping his grandfather produce the local newspaper by typesetting, folding papers, and making deliveries. His family returned to Aberdeen just as World War II was starting in Europe. Anxious to serve his country, Chuck ran away from home in 1945 at age 17 to enlist in the Marine Corps, but his mother wouldn't sign the papers and he had to wait until he was 18 in 1946. He always referred to himself as a "Hollywood Marine," never serving outside of California. After an honorable discharge in 1948, Chuck moved to Phoenix and attended Arizona State College (now ASU). In 1952, he started an advertising agency with an acquaintance and his soon-to-be wife, Kathryn "Kay" Liem. Chuck and Kay married in 1954 and had three sons: Charles Craig (1955), Robert Kevin (1957), and Brian Frederick (1963). In 1953, Chuck began a long partnership with Johnny and Martha Akers selling advertising and publishing construction-related magazines including Arizona Builder & Contractor and Arizona-New Mexico Contractor and Engineer. In 1969, he launched Runbeck & Associates, an advertising agency and print brokerage. Chuck added election printing to the mix in 1970, and that became important work that grew steadily. His son, Kevin, took the company helm in the late 1980s, and the name evolved from Runbeck Graphics to the current Runbeck Election Services. Chuck was also involved in land development, lobbying, and public relations. In 1983, Chuck returned to publishing, reviving a previous magazine and renaming it Southwest Contractor and then starting Southwest Builder a few years later. In 1990, he sold both these successful publications to McGraw-Hill, but not ready to retire, he returned to Runbeck Graphics, and, with son Kevin, began Southwest Graphics magazine. Chuck "retired" for the second time in 1997 and he and Kay moved to east Texas, while Chuck managed to stay actively involved in Southwest Graphics. In 2006, Chuck and Kay returned to Arizona, buying a home in Payson and eventually settling back in Phoenix at Sagewood retirement community in 2012. In 2011, at age 83, Chuck was approached to help launch a new magazine, Arizona Contractor & Community; he mentored the young staff and became the lynchpin for the publication's success. He was still selling advertising through his 90th year, in person. Chuck also proudly served for 35 years as Executive Director of the Associated Equipment Distributors of Arizona. Throughout his life, Chuck enjoyed travel, family, friends, and work. Chuck is survived by his wife of 66 years, Kay, his sons Craig (Debra) , Kevin (Sandi and Kayti), and Brian, his grandchildren Nathan, Daniel (Chelita), Matina (David), and Erin, his great-grandchildren Emilio and Elena, his older sister June Potochnik, and many in-laws, nieces, nephews, great-nieces, great-nephews, friends and co-workers, all of whom loved him dearly. Unfortunately, no public services can be planned at this time.

"Having only known Chuck since he was 70ish I was always impressed with his drive, energy and his ability to make friends and fit into any situation. And his optimism was infectious. He always bounced back with a new idea or plan. If he had a bad side I never saw it. He retained the ?kid? inside that so many lose and was always game for whatever came his way. He modeled aging well. His last chapter in the magazine business was nothing short of amazing. He had a great life and he leaves a great legacy. My heart and thoughts are with you. Cheers to Chuck! "

"To Chuck's family . I don't know that many of us have ever met anyone with more energy, new ideas , and all with a very positive attitude . We all need more like Chuck in the world .May he be at peace . Mike Watts "

"To the family, I was saddened when I read the notice in the newspaper, my condolences. My memory is when the receptionist would call and say "Chuck Runbeck is here to see you." I knew i was going to have to come up with copy or an insert for the latest Southwest Graphics magazine or the Buyers Guide. I knew I needed to get to work! He was always pleasant AND persuasive. God speed. "

"What a great guy ! Was always pleasure to see him pushing a full page ad in Southwest magazine always had a Smile. Don Epley"

"It was always a pleasure to spend time with Chuck.He was so proud of his wife and boys.EVERY ONE OF US will miss his big smile and rosy cheeks.I will miss his big hug on Sunday morning at Heritage Bible church. Margaret Bowden"

"He shall be missed by many. Thoughts love and prayers go out to all. Sandy"

"He shall be missed by many. Thoughts love and prayers go out to all. Sandy"

"Kevin, Brian, Daniel, and all of your family, as well as your team at Runbeck Election Services, I am sorry to hear of the passing of Charles. From your tribute, I see that he enjoyed a most-interesting life and career, and I know he will be greatly missed. With condolence, Charlie Benson, your Colonial Life agent"

"I so enjoyed working with Chuck when I was editor at Southwest Graphics. Great sales and marketing man and a great guy! Condolences to Kay and Kevin and all his family."

"Shenandoah Bright eyes, always a smile and a laugh......Chuck was a good man with a kind soul. Who could ask for more? You are in many hearts...... "

"We at Arizona Contractor & Community only met Chuck later in life, when Billy Horner reached out to him a decade ago for guidance on how to launch this magazine. Chuck was happily retired and did not need work. But I suspect he liked our spunk at starting a print publication in the online era. Chuck was a born salesman and couldn?t resist the lure of being ?back in the game.? We certainly needed him more than he needed us. Yet, I like to think Chuck?s success in steering the publication and putting his reputation on the line to sign up our first advertisers helped him remain vital in his final years. Chuck was able to reconnect with old associates, make new friends, and mentor the staff, happy to know that he still possessed the marketing magic needed to make this long-shot vision became a reality. Chuck?s absence will leave a huge void at the magazine. Thanks again, Mr. Runbeck, for passing on your wisdom, sharing your stories, and allowing us to team up with an old master for one last exciting ride to the print house. You will be missed."

"We always enjoyed chatting with Chuck at the annual Runbeck holiday party. It was very apparent that loved his family dearly and was especially proud of his children. He will be missed. Warm regards, Richard and Linda Warren"

"So sorry for your loss, Brian. Your father sounds like he was a wonderful man. He will live on in you.?"